I am staying at the Lough Erne Resort, which describes itself as “The Gateway to North-West Ireland.”

The Lough Erne Resort in Enniskillen, Co Fermanagh, is the first AA and NITB Five Star Hotel in Northern Ireland, and was awarded ‘Best Hotel’ at last year’s 2011 Northern Ireland Tourism Awards and ‘Golf Resort of The Year’ by the Irish Golf Tour Operators Association in 2010.

The resort is set on its own 600-acre peninsula, between Castle Hume Lough and Lower Lough Erne, just outside Enniskillen, with stunning panoramic views from almost every vantage point.

Fermanagh, with its Cathedral, Watergate and Castle, has a legacy and a history that include some of Ireland’s finest treasures, including intriguing rock carvings dating back to 3000 BC, stunning castles and stately homes as well as ancient traditions and crafts.

Enniskillen Castle, situated on the banks of the River Erne, was built in the early 15th Century by the Maguires, who then ruled Fermanagh. The castle now houses the Fermanagh County Museum and Inniskillings Museum.

The Gordon Wilson Library at Lough Erne Resort has been dedicated to the Peace Campaigner, Gordon Wilson. On Remembrance Sunday 1987, 12 people, including his daughter Marie Wilson, were killed in a terrorist bombing in Enniuskillen. It could have provoked anger and revenge; but instead what emerged was forgiveness and reconciliation.

In an interview with the BBC, Gordon Wilson described with anguish his last conversation with his daughter and his feelings toward her killers: “She held my hand tightly, and gripped me as hard as she could. She said, ‘Daddy, I love you very much.’ Those were her exact words to me, and those were the last words I ever heard her say.”

Gordon Wilson went on to add, “But I bear no ill will. I bear no grudge. I will pray for these men tonight and every night.”

For the rest of his life, Gordon Wilson worked hard to bring about reconciliation between people in Northern Ireland.

The monastic site on Devenish Island in Lower Lough Erne was founded in the sixth century by Saint Molaise, and is one of the finest sites in Ireland. It includes a 12th century round tower, several church ruins, two graveyards and an unusual cross.

Belleek Pottery was established in 1857 and holds a special place in the cultural and commercial heritage of Co Fermanagh. The display at the visitor centre includes earthenware dating from the 1850s and works from every Belleek period as well as Masterpieces like the Exhibition Centrepiece.

Castle Coole, home of the Earls of Belmore, is one of the finest neo-classical houses in Ireland. It was designed in 1789 by James Wyatt, it houses fine interiors and exquisite furnishings.

Florence Court House was built in the 18th century by John Cole. The features of the house include exquisite roccoco plasterwork and original period furniture, and the house also has pleasure grounds and walled gardens.

Poems for Lent (6): ‘The Retreat,’ by Henry Vaughan 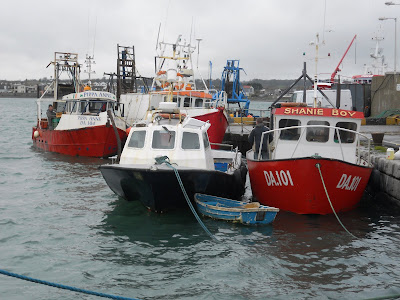 The Retreat ... the harbour at Skerries during the Ash Wednesday retreat last week (Photograph: Patrick Comerford, 2012)

I began this year’s Lenten season with a retreat in Skerries on Ash Wednesday, and so for my Poem for Lent this morning I have chosen ‘The Retreat’ by the Welsh metaphysical poet and physician Henry Vaughan (1621-1695.

Henry Vaughan was born in Llansanffraid, near Brecon, on 17 April 1621, and lived there for most of his life. He studied at Jesus College, Oxford, but never took a degree, and then moved to London where he studied law for two years.

Around 1650, Vaughan underwent a spiritual awakening or conversion that he credited to the poetry of “the blessed man, Mr George Herbert.”

The priest-poet George Herbert provided a model for Vaughan’s newly founded spiritual life and literary career, in which he displayed "spiritual quickening and the gift of gracious feeling.

Vaughan was married twice and was the father of eight children. He died on April 23, 1695, aged 74. He is buried in the churchyard of Saint Bridget’s, Llansantffraed, Powys.

Henry Vaughan was acclaimed less during his lifetime than after his death. In today’s poem, ‘The Retreat,’ he is bemoaning his sins and wishing that he could go back to a purer state, one where his soul was free from sin:

Before I taught my tongue to wound
My conscience with a sinful sound.

He talks about a child-like time when his soul was pure and sinless, and contrasts that pure state with his present spiritual state in which he has a different kind of sin for every sense in his body.

He closes by saying that he hopes that there will not be much more of a delay before he can return to this sinless state of being – an appropriate focus for our disciplines and prayers during this period of Lent.

The Retreat by Henry Vaughan

Happy those early days! when I
Shin’d in my angel-infancy.
Before I understood this place
Appoint’d for my second race,
Or taught my soul to fancy ought
But a white, celestial thought,
When yet I had not walk’d above
A mile, or two, from my first love,
And looking back (at that short space,)
Could see a glimpse of his bright face;
When on some gild’d cloud or flower
My gazing soul would dwell an hour,
And in those weaker glories spy
Some shadows of eternity;
Before I taught my tongue to wound
My conscience with a sinful sound,
Or had the black art to dispence
A sev’ral sin to ev’ry sense,
But felt through all this fleshly dress
Bright shoots of everlastingness.

O how I long to travel back
And tread again that ancient track!
That I might once more reach that plain,
Where first I left my glorious train,
From whence th’enlightened spirit sees
That shady city of palm trees;
But (ah!) my soul with too much stay
Is drunk, and staggers in the way.
Some men a forward motion love,
But I by backward steps would move,
And when this dust falls to the urn
In that state I came return.