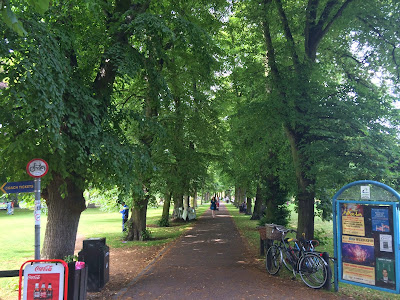 My own “typos” constantly prove I can never attain a claim to infallibility, so I am reluctant to point out the typing errors of others, and certainly would not want to do so in a way that would identify them publicly.

But, a few months ago I came across the peace in a service sheet in one parish that invited us to share the “Piece of Christ.”

On the other hand, there is a public park in the centre of Cambridge that is called Christ’s Pieces. This Victorian park is only a short walking distance from Sidney Sussex College, which I dropped into this afternoon [25 June 2014] on a detour through Cambridge, on my way from the annual conference of Us (formerly USPG) to Stansted Airport to catch the last flight back to Dublin.

Christ’s Pieces is to the east of Christ’s College, from which it takes its name, and to the north of Emmanuel College., and beside Drummer Street Bus Station, which is on the southern edge of Christ’s Piece near the south-west corner. There are tennis courts and a bowling green too, and the Christ’s Pieces Residents Association tries to maintain the character of the area.

In the Middle Ages, the area now known as Christ’s Piece was used for agriculture. A cereal crop is shown on a map from 1574, and later it became pasture land. At one point, the place formed part of the Barnwell Open Fields known as the Clayangles.

The 16th and 17th century paths include Pike’s Walk and Milton’s Walk. Milton’s Walk, which marks the boundary between Christ’s College and Christ’s Pieces, was once a mediaeval lane. In that map from1574, it is called “Christes Colledge Walke,” but the later name of Milton’s Walk honours the poet John Milton (1608-1674), who was once an undergraduate at Christ’s College.

By 1688, a diagonal path ran from the south-west corner to New Square. By the end of the 18th century, there was tree-planting along the boundary with Emmanuel Road. Further trees were in place along Pike’s Walk by 1830 and 1852.

With the passing of the Enclosure Act, the land passed to Jesus College. In 1886, the area was acquired from Jesus College by the Corporation of Cambridge for the sum of £1,000. The corporation drained the land, planted many more trees and a multitude of bulbs and laid out the park much as we see it today, although a planned artificial lake never materialised and the Victorian bandstand is long a thing of the past.

Before visiting Christ’s Pieces I spent some time in Waterstone’s Bookshop in Sidney Street, stopped off for light refreshment in Baroosh Bar in Market Passage, off Sidney Street, and dropped into Sidney Sussex College, where I have stayed each year since 2008. 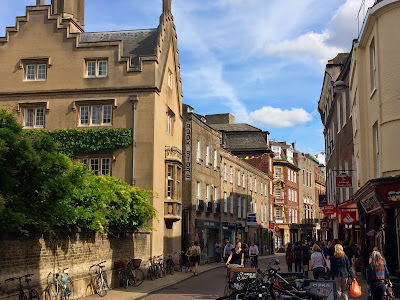 Strolling through the heart of Cambridge in the summer sunshine this afternoon (Photograph: Patrick Comerford, 2014)

In between the three of these, as I was strolling along Sidney Street I bumped into Archbishop Rowan Williams, the former Archbishop of Canterbury, who is now Master of Magdalene College, Cambridge.

On a sunny afternoon, you just don’t know what to expect or who you are going to meet in Cambridge. 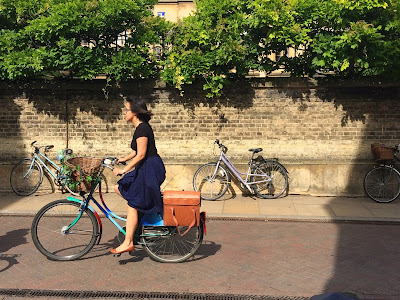 Bringing the love of Christ
even into the darkest places 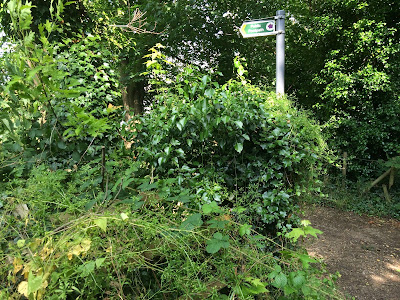 Pointing the way forward ... a walk through the countryside at High Leigh (Photograph: Patrick Comerford, 2014)

The annual conference of Us (formerly USPG) came to an end at High Leigh at lunchtime today [25 June 2014] with a celebration of the Eucharist. Bishop Jacob Ayeebo from Ghana, one of the retiring trustees, presided and the preacher was the Chief Executive of Us, Ms Janette O’Neill.

Janette spoke movingly as she related the story of Christ’s healing of the Canaanite woman (Matthew 15: 21-28) with the plight of women who are the victims if gender-based violence, including the 200 schoolgirls kidnapped in Nigeria, the woman stoned to death on the steps of a courthouse in Pakistan, teenage girls raped and hanged in India and women who are the victims of domestic violence in Zambia.

She spoke of the work of Us in challenging gender-based violence and bringing the love and light of Christ even into the darkest places.

Earlier in the morning we talked about fundraising, legacies and recruiting volunteers as part of carrying the vision of Us forward in the coming years and generations.

The directors of Us Ireland and Us Northern Ireland who are here also met briefly during the morning session to discuss our vision for future plans and projects.

The Revd Tim Harford, the newly-appointed Director of Fundraising and Communications, spoke about recruiting, training and enabling volunteers and the need for legacies,

.One new initiative is the Bray Circle, which replaces the 300 + Club, set up to mark the 300th anniversary of the foundation of the Society for the Propagation of the Gospel in 1701. This new initiative invites two levels of membership, with members pledging £300 or more a year, and patrons giving £1,200 a year or more.

Tim and Carrie Myers, the Volunteering Manager, emphasised the need for invitations to churches and parishes to talk about the work of Us. 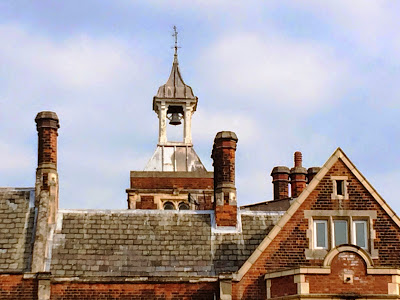 Posted by Patrick Comerford at 12:50 No comments: