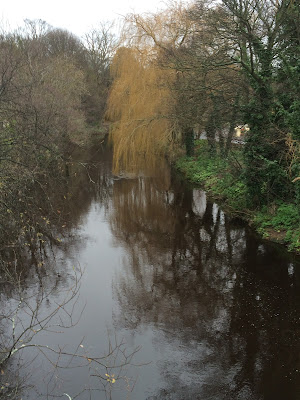 My reflexes were too slow to catch a photograph of the kingfisher as a dashed along the banks of the River Dodder in Rathgar (Photograph: Patrick Comerford, 2016)

I went for a walk by the banks of the River Dodder in Rathgar yesterday afternoon [18 January 2016].

Although the light was duller and the temperature was colder than my experience during a similar walk last Saturday afternoon, it was still a pleasant experience.

As a looked down on the willows and the water from the bridge over the river at Orwell Road, I noticed an electric blue figure dash along in a straight line below me.

It was too large to be a fly, too small to be a drone or a toy. My reflexes were too slow, and just as I realised this was a kingfisher it was gone again before I could even reach for my phone to take a photograph.

I regularly see herons, swans and mallards on this stretch of the river between Rathfarnham and Milltown, and there is the occasional otter too. But this is the first time I noticed a kingfisher here … and by the time I realised what I had seen, he was gone again.

The River Dodder is one of the few remaining breeding grounds for the kingfisher in Dublin city, and I believe there are some concerns about the impact of climate change on their habitat. They only breed in earthen banks, and if there is flooding their nests can be washed away.

Kingfishers are quite small, not much bigger than a robin, they are very striking because with the most colourful plumage of any Irish wild bird. They are so iridescent that they can appear to emit blue light. They need clear, shallow water with a good supply of small fish and large invertebrates to feed on, over-hanging branches to supply perches to dive off to catch this prey and vertical banks of soft soil to make their nests.

Because kingfishers defend quite large territories, there are never great numbers of them in any one area.

In the dullness of the afternoon lights yesterday, I was delighted to realise this kingfisher’s nest in the banks of the River Dodder was not washed away by the recent floods.