Thinking about the seashores of Crete 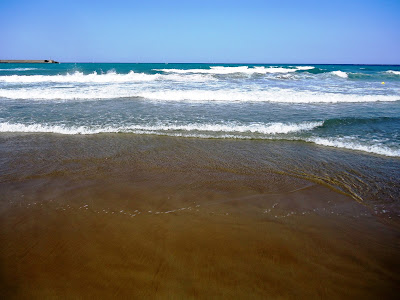 Στο περιγιάλι το κρυφό ... On the secret seashore ... on the beach in Rethymnon earlier this month (Photograph: Patrick Comerford, 2013)

Less than two weeks after returning from Crete, I still have the words of a poem by the Greek poet Giorgios Seferis (1900-1971) going round and round in my mind.

As I think of the beaches of Rethymnon, my mind is humming the arrangement by Mikis Theodorakis of the poem Αρνηση (Denial) or Στο περιγιάλι (Sto Perigiali), which is well-loved and popular in Greece. In this poem, Seferis conjures up wild and romantic images of a Greek beach setting. But, he does so in a way that is characteristic of Seferis and his work, with a human story at its heart.

At the same time, I am reminded of the role this poet and former ambassador played in resisting the far-right junta of the colonels in Greece after they took power in 1967, and the frightening spectre of the resurgence of the far-right in Greece today.

Seferis is one of the two Greek poets to have been honoured with the Nobel Prize for Literature – the other poet is Odysseas Elytis (1911-1996), who was born in Iraklion in Crete, and together Seferis and Elytis can be credited with the modernisation of Greek literature.

Seferis was born in Urla, near Smyrna (present-day Izmir in modern-day Turkey), in 1900 but moved to Athens with his family in 1914, before the horrific ethnic cleansing of the 1920s, and there received his education.

His collection Στροφή (Strophe, Turning Point), which was published in 1931, included the poem Άρνηση (Denial).

Seferis was also greatly influenced by Kavafis, TS Eliot and Ezra Pound and in 1936 he translated Eliot’s Wasteland into Greek. It is easy to find resonances of the Wasteland in Seferis’ Μυθιστόρημα (Mythistorema, Mythical Narrative), with the dreamy darkness of the narrative and the fragmentary form.

His sense of being an exile from his home constantly haunted him. He did not return to the city of his birth until 1950, but then found a sense of closure when he visited Cyprus in 1953, feeling an instant affinity with the island. That visit inspired him to end a seven-year literary dry spell, and a new collection of poems, Ημερολόγιο Καταστρώματος ΙΙΙ (Imerologio Katastromatos III, Log Book III), celebrated that sense of homecoming.

He received the Nobel Prize for Literature in 1963. Four years later, after the military coup in 1967, Seferis went into voluntary seclusion and many of his poems were banned, including the versions that Mikis Theodorakis had set to music and arranged.

On 28 March 1969, he made a statement on the BBC World Service, distributing copies to every newspaper in Athens, and declaring in absolute terms: “This anomaly must end.”

He became an important symbol of resistance against the repressive right-wing regime that continued to terrorise Greece until 1974. Denial and its setting by Mikis Theodorakis became the anthem of resistance to the colonels, and when he died in 1971 huge crowds followed his coffin singing the words Denial. He is buried at the First Cemetery of Athens.

His place in Greek culture was acknowledged when a well-loved stanza from his 1935 collection Μυθιστόρημα was included in the Opening Ceremony at the 2004 Athens Olympics:

I woke with this marble head in my hands;
It exhausts my elbows and I don’t know where to put it down.
It was falling into the dream as I was coming out of the dream.
So our life became one and it will be very difficult for it to separate again.

Thanks to the music of Mikis Theodorakis, Denial is probably the best -nown poem in all modern Greek poetry.

Tonight I am thinking of Crete and secret seashores, golden sands, sea-breezes ... and those who resist the rise of political evil in Greece.


Posted by Patrick Comerford at 21:48 No comments: