A baptism in the Church of Saint John the Baptist 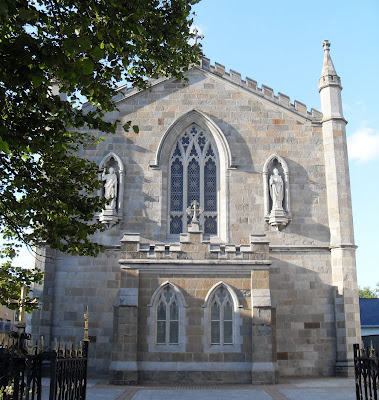 I am taking part in a family baptism later this morning in the Roman Catholic parish church of Saint John the Baptist in Clontarf.

The parish traces its history back to a Synod of Leinster clergy in Kilkenny in 1618, when the surviving Roman Catholic parishes in Ireland were reorganised.

The first public chapel for the parish was built in Coolock at the end of the 17th century. A second chapel was established in Ballymun in the mid-18th century for the areas of Glasnevin and Santry, which were then remote corners of a large parish. A third chapel was later built in Fairview and was blessed by Archbishop Troy in December 1819.

Clontarf got its first chapel in 1825. This was a plain rectangular building which was built on a strip of ground running east to west at the end of the back garden of Summerville House, almost on Kincora Road.

When the Revd James Callanan became parish priest in 1829, the union of the parish was re-named Clontarf instead of Coolock parish. He increased the size of the chapel in Clontarf and used his own money to buy a house which is now occupied by the Holy Faith sisters.

Father Callanan soon found his enlarged chapel was too small, and he approached Colonel Vernon of Clontarf Castle for a site for a more spacious church.

The foundation stone of a new church of Saint John the Baptist – sharing the same name as its Church of Ireland neighbour – was laid by Archbishop Murray on 16 June 1835, and the church was still unfinished when it opened for Sunday Mass in 1838.

The church was designed by the prominent Dublin church architect, Patrick Byrne. One of Father Callanan’s curates, Father Edward McCabe who went on to become Cardinal Archbishop of Dublin.

Father Callanan died in 1846, and was buried in the church grounds, where his gravestone still stands. When he died, he left his house to his sister who sold it to the Royal Irish Constabulary.

Clontarf was divided into two parishes in 1879 so that Fairview, Artane, Glasnevin and Santry formed one parish, and a smaller parish of Clontarf consisted of Clontarf, Killester, Coolock and Raheny.

The Sisters of Holy Faith Sisters came to Clontarf in 1890 at the invitation of Father Patrick O’Neill. A local woman, Miss Allingham, who had a cousin in the order, helped the sisters to buy Father Callanan’s old house as a convent when the RIC moved out of their barracks and to open schools for boys and girls.

Owison Allingham paid for the enlargement of the church of Saint John the Baptist in 1895, with the addition of 17 ft at the chancel end of the church. He also donated the high altar, the pulpit, the altar rails, the sacristy, the bell and belfry, and many new pews, while his sister decorated the church internally.

In 1909, Clontarf was separated from Coolock, Raheny and Killester and became a separate parish. Saint Anthony’s Church opened in 1927 in the building that had served as Clontarf’s town hall until 1900. Saint Gabriel’s Church opened in 1956. These new chapels became parish churches in 1966 when Clontarf was divided into three parishes. But the three parishes were united again in 2009 as one parish.

I took part in a wedding in the Church of Saint John the Baptist in 2011, and now I am back today to take part in baptising my niece’s son.