Popping a little fizz into the debates at General Synod 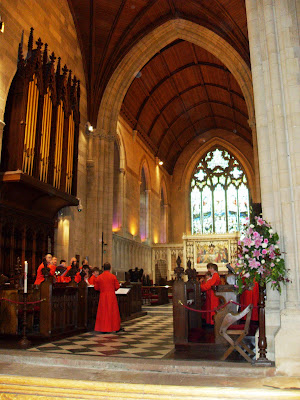 The General Synod of the Church of Ireland enters its second day today at the Armagh City Hotel. Despite a very good address by Archbishop Alan Harper on the need to bring more passion back into the debates of the General Synod, we ended up with a very tedious morning running through the legalities of a number of bills being introduced this year.

Much of the work yesterday morning was probably being done in the corridors, over cups of coffee and in small talk at the stalls and exhibitions. Nevertheless, I still wonder what our guests made of it all.

I am one of the synod members asked to act as hosts to our ecumenical guests and visitors from other churches this year.

Hope fully they were more informed of our concerns as a church this afternoon when it came to debates on education, youth work and liturgical reform.

Bishop Ken Clarke of Kilmore was the preacher last night at the Synod Eucharist in Saint Patrick’s Cathedral. Earlier in the afternoon, during the discussion of the report of the Liturgical Advisory Committee, Bishop Michael Burrowes tried to bring a bit of “fizz” into the discussions as he recalled his experiences of using champagne for the Easter Eucharist in Cashel Cathedral and how in popping champagne corks he had broken the chandeliers. Bishop Ken joked that all he could offer was Fanta.

But there was more on offer, along with this challenging and well-crafted sermon. The setting for the Eucharist was Haydn’s Missa Brevis Sancti Joannis de Deo. The choir was directed by Dr Joe McKee, and the Revd Peter Thompson was the organist.

The hymns included All my hope on God is founded to music by Hebert Howells, Charles Wood’s Expectans Expectavi, Egan’s moving setting of The Lord is my shepherd, Bi, a Íosa, sung by the boys’ voices in the choir, Fred Kaan’s hymn Now let us from this table rise, sung to a very interesting adaptation of a Swiss melody by Vaughan Williams.

For the Very Revd Patrick Rooke, this was his last Synod Eucharist as Dean of Armagh – later this year he will be consecrated in the same cathedral as Bishop of Tuam, Killala and Achonry. The two ordinands who led the intercessions will also be ordained in this cathedral in September.

Recently, the cathedral opened a new attraction at No 5 Vicars’ Hill, the former Diocesan Registry, where the display of “Collectibles and Curiosities” includes legacies from 18th and 19th century Archbishops of Armagh.

But the cathedral itself has many interesting monuments and windows – including “Tandragee Man,” monuments to Archbishop William Alexander and Dean Peter Drelincourt, and a plaque on the outside north wall reminding us that this is the burial place of King Brian Boru, who was killed at the Battle of Clontarf in 1014. Now, there’s an anniversary that is in danger of being forgotten in the midst of competing centenaries over the next few decade or so.

As I headed back down the hill to dinner, and strolled through the streets of this beautiful Georgian cathedral city, I was left asking myself: has the chapter of Armagh more beards than any other cathedral chapter in the Church of Ireland?

Today promises interesting debates on the Anglican Covenant and ecumenical and Inter-Faith dialogue.