The Synagogues of Prague,
5, The Spanish Synagogue 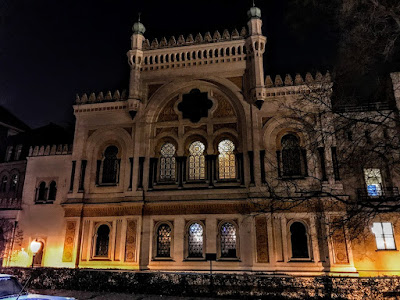 The Spanish Synagogue in Prague is a Moorish-style synagogue and one of the most beautiful in Europe (Photograph: Patrick Comerford, 2019)

I visited the Spanish Synagogue in Dusni Street twice last week, once to see the synagogue itself, and later in the evening for a concert. Arabesques, gilt and polychrome motifs with a dazzling combination of rich green, blue and red hues make this Moorish-style synagogue one of the most beautiful in Europe. The interior of this 19th century creation is breath-taking, with its Torah ark and central dome as masterpieces of Spanish-inspired architecture.

A small park with a statue by Jaroslav Róna of Prague’s best-known Jewish writer Franz Kafka lies between the synagogue and the neighbouring Church of Holy Spirit, first built in 1346 as part of a Benedictine convent.

The Old Synagogue or Altschule dated back to at least the 12th century, and its story was one of tragedy after tragedy. The victim of four fires, the synagogue was also damaged in the Easter pogrom in 1389. It was shut down by Emperor Leopold I in 1693 but opened its doors again in 1704, only to be pillaged in 1744.

The Old Synagogue was rebuilt five times from 1536 to 1837. When it was renovated in 1837, it became the first synagogue in Prague to offer reform services and the first in Bohemia to have an organ. Frantisek Skroup, who would later compose the Czechoslovak and now Czech national anthem, Where is my home?, was the organist and choirmaster there for almost 10 years, from 1836 to 1845.

The Spanish Synagogue was built in 1868 (Photograph: Patrick Comerford, 2019)

Prague’s Jewish community has always been mainly Ashkenazic, so the name of the Spanish Synagogue does not refer to a Sephardic presence in Prague. Instead, the name refers to the Moorish revival style in its architectural design, inspired by the Alhambra and the art and architecture of the Arabic period in Spanish history.

A similar cultural influence shaped the design of the Neue Synagoge or ‘New Synagogue’ on Oranienburger Straße, the main synagogue of the Jewish community in Berlin, built in 1859-1866, with its domes and its exotic Moorish style that also reflect the Alhambra.

The Spanish Synagogue was designed by Vojtěch Ignác Ullmann, a renown architect of the Bohemian neo-renaissance, and the imposing interior and layout were created by Josef Niklas. 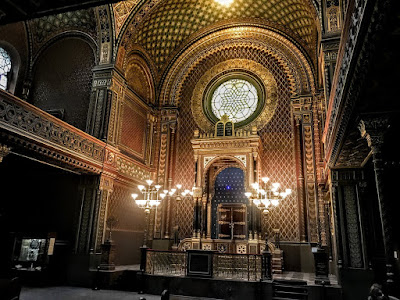 The interior of the Spanish synagogue was decorated in 1882-1893 to designs by Antonín Baum and Bedřich Münzberger (Photograph: Patrick Comerford, 2019)

The synagogue is two storeys high, its ground plan is square and the main hall has a dome is surrounded by three built-in balconies, with an organ in the south balcony.

The synagogue is laid out in the Reform style. The bimah or reading platform is at the east end rather than the central space as in traditional synagogues or at the west wall as in Sephardic synagogues.

The monumental aron ha-kodesh or holy ark where the Torah scrolls are kept has no parochet or curtain today, and is designed in the style of a mihrab. Above, in the east wall, a great round stained-glass window with a central decoration of the six-sided Magen David (Star of David) was installed in 1882-1883.

The benches stand in rows, like pews in a church, instead of being arranged around the walls. They are not original, but come from a synagogue in Zruč nad Sázavou, a small town in Central Bohemia, south-east of Prague.

The most impressive decorative element in the synagogue is a gilded and multi-coloured parquet arabesque. The synagogue was decorated in 1882-1893 to the designs of Antonín Baum and Bedřich Münzberger, who were inspired by Arabic architecture and art.

The overpowering internal decoration is formed by low stucco of stylised and coloured Islamic motifs. Decorative elements were also applied to the doors, the organ and the wall panelling, and the windows are filled with tinted glass.

In 1935, a functionalistic building, designed by Karel Pecánek, was added to the synagogue. Until World War II, it served the Jewish Community as a hospital. The synagogue also used the space of the new building, which provides a vestibule, a shop, a winter oratory and additional exhibition space.

Since 1935, the appearance of the synagogue has remained essentially unchanged. 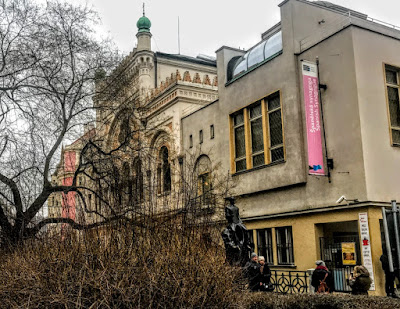 The appearance of the Spanish Synagogue has remained unchanged since 1935 (Photograph: Patrick Comerford, 2019)

The Nazis used this synagogue during World War II to catalogue and store property stolen from the Czech Jewish communities, including furniture from other synagogues.

Ten years after the war, the synagogue was returned to the Jewish Museum, it was fully restored inside in 1958-1959, and an exhibition of synagogue textiles opened there in 1960. By the 1970s, however, the building was neglected and it remained closed after 1982.

Restoration work resumed after the ‘Velvet Revolution,’ and when the synagogue was completely restored to its former beauty it re-opened in 1998.

This beautiful synagogue used today by Conservative Jewish community Bejt Praha. Kabbalat Shabbat is at 6 p.m. or 7 p.m., depending on the time of year, and welcomes all Jews, whether Reform, Orthodox or Secular.

The Spanish Synagogue is administered by the Jewish Museum in Prague. The exhibitions look at modern Jewish history in the Czech lands, from the reforms initiated by the Emperor Joseph II to the contribution of many Jewish people – including Franz Kafka – to Czech culture, literature, education, economy and science, as well as the traumatic events of the 20th century. It is also a regular venue for cultural events, including concerts and readings.

Next: The Pinkas Synagogue.

The Synagogues of Prague,
4, The Klausen Synagogue 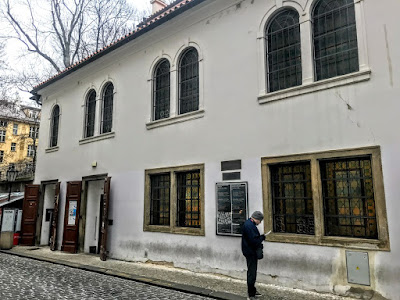 The Klausen Synagogue is the largest surviving synagogue in the former Jewish ghetto in Prague (Photograph: Patrick Comerford, 2019)

This complex was known as Klausen, a German term derived from the Latin claustrum, meaning a closed space.

Mordechai Maisel, a renowned businessman who had found favour in the Habsburg court and who was the great benefactor of the ghetto, acquired the site from its Christian owners in the late 16th century. He used part of the site to extend the Jewish Cemetery, and in 1570, he set about building a complex in the area of the present synagogue that included synagogues and a private Talmudic school.

Prague’s famous rabbi and scholar, Judah Loew ben Bezalel, known affectionately to this day as Maharal taught at this school. 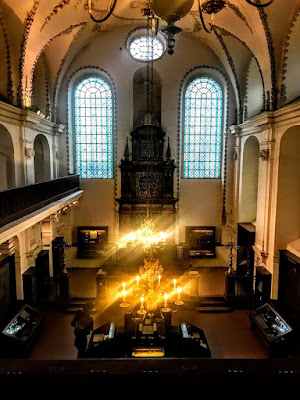 Inside the Klausen Synagogue in Prague (Photograph: Patrick Comerford, 2019)

During the great fire that devastated the Prague ghetto in 1689, all the buildings in the Klausen were destroyed, and the new synagogue built on the site is named after them.

Shelomo Khalish Cohen, a rabbi of the burned-down synagogue in the Klausen complex, initiated the building of a new synagogue in early baroque style at the site.

The building was finished in 1694, and two years later the monumental three-tiered aron ha-kodesh or holy ark for the Torah scrolls was added, thanks to the generosity of Samuel Oppenheimer, then an affluent and influential person in the Hapsburg Empire. It is in the style of an early baroque altar.

The two-storey extensions at the north and west sides of the synagogue were built at the same time or a little later and are a little lower than the main building.

Many important rabbis are associated with the synagogue, including Elazar Fleckeles (1754-1826), a prolific author. 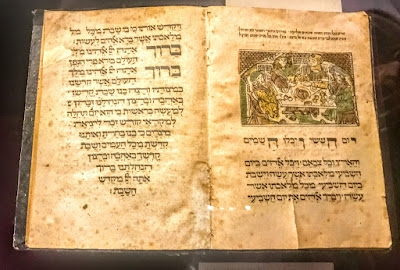 The synagogue was rebuilt in 1883-1884 by the architects Bedřich Münzberger and Antonín Baum, who were also involved in decorating the Spanish Synagogue. During this work, the western women’s gallery was elevated to the level of the main building.

During World War II, the Nazis used the Klausen Synagogue for storage. After the war, an exhibition on the theme of Jewish festivals and customs opened there.

The synagogue was rebuilt in 1960 and 1979-1981, and the aron ha-kodesh was restored in 1983. A year later, a new exhibition of Hebrew manuscripts and early prints opened in the Klausen Synagogue.

The synagogue was restored again in 1995-1996 and the exhibition on Jewish festivals and customs reopened. Today the synagogue is administered by the Jewish Museum in Prague. 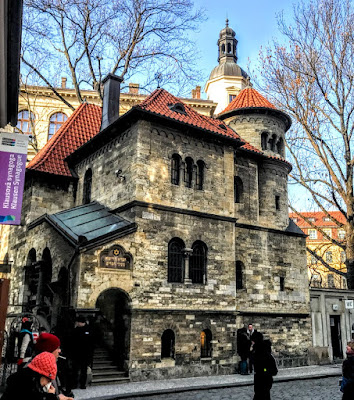 The Jewish Ceremonial Hall, beside the Klausen Synagogue, was built in the neo-Romanesque style in 1906-1908 (Photograph: Patrick Comerford, 2019)

The exhibition introduces visitors to the foundational texts of Judaism, the Torah and the Talmud, sacred space in Judaism, the traditional components of the synagogue interior, the order of synagogue prayer services and texts and objects used in worship in synagogues. Other displays introduce Jewish Festivals and daily Jewish family life, as well as important milestones in Jewish life, including birth, circumcision, and marriage.

The theme of this exhibition continues in the neighbouring Ceremonial Hall which looks at the topic of the end of life.

The Jewish Ceremonial Hall was built in the neo-Romanesque style in 1906-1908, designed by the architect J Gerstl for the Jewish Burial Society, Hevrah Kaddishah.

The ceremonial hall is at the entrance to the Old Jewish Cemetery, founded in the early 15th century and one of the oldest and best-preserved Jewish cemeteries in Europe. There are about 12,000 tombstones in the cemetery, but the number of burials is far higher. Burials here ended in 1787. 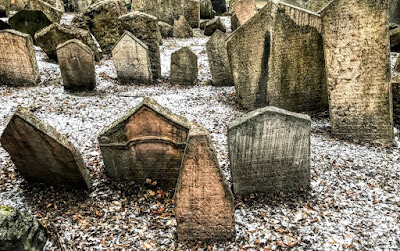 Gravestones in the Old Jewish Cemetery date back to the 15th century (Photograph: Patrick Comerford, 2019)

Next: The Spanish Synagogue.