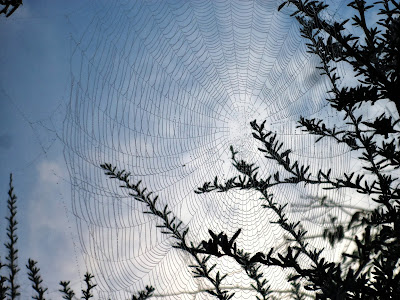 Cobwebs in the dew-covered branches this morning (Photograph: Patrick Comerford, 2013)

The temperature each day this week has been hovering in the high teens, sometimes even reaching 20, and it seems the bright sunshine is telling me that the late summer is lingering even though September is coming to a close.

But the crisp leaves on the ground, the morning mists, the shining pearls and droplets of dew on the grass and on the spreading cobwebs in the branches of the trees and the bushes, and the low setting sun in the evenings tell me autumn has arrived. 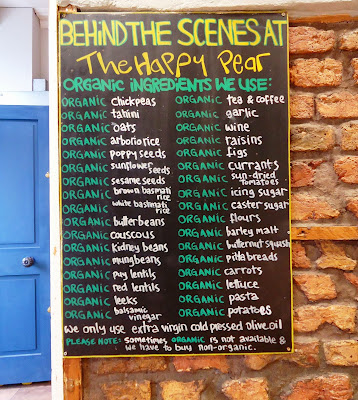 A happy approach to food in the Happy Pear this afternoon (Photograph: Patrick Comerford, 2013)

This was the last day of the first week of the new semester. Throughout the morning, the sun struggled to break through the clouds, and in the late afternoon two of us called it a day and headed down to Greystones for a late lunch on the street in front of the Happy Pear and a stroll on the beach. 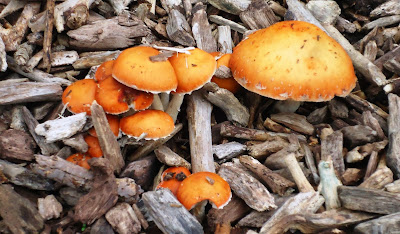 Autumn toadstools near the railway line and the beach in Greystones this afternoon (Photograph: Patrick Comerford, 2013)

The east coast probably has more than its share of mist and coastal fog on days like this. But there was a small number of people on the beach, strolling in pairs with their dogs, one sitting alone on the edge of the water looking out at the greying sky and listening to waves roll in on the pebbly shore. 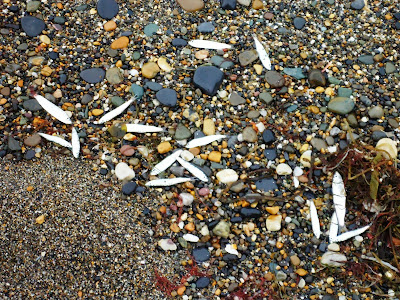 Hundreds of silver-white fish washed up along the shoreline in Greystones this afternoon (Photograph: Patrick Comerford, 2013)

Out in the water, a lone angler in his small boat was slowly working his way back and forth along the coast. The waves had washed up hundreds of tiny silver-white fish on the margins of the shoreline, and the lone angler and a cormorant bobbing up and down in the water beside his boat were taking advantage of a larger shoal of fish that had chased the stranded, struggling creatures in from the sea.

As we headed back on the M50 through South Dublin between 6.30 and 7, the low setting sun lingered in the west like an orange balloon, a true reminder that autumn has arrived. 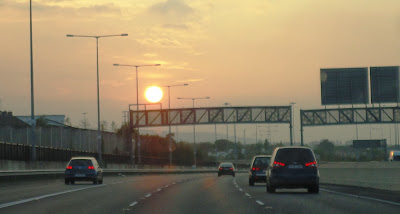 The autumn sun setting above the M50 (Photograph: Patrick Comerford, 2013)

Posted by Patrick Comerford at 21:05 No comments: