A winter’s walk by the banks of the Boyne 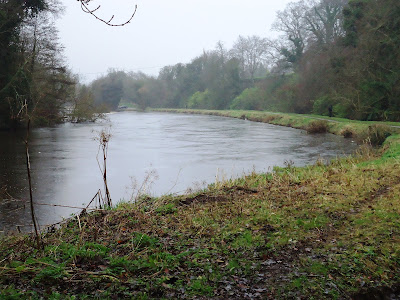 As we walked along the path between the river and the canal, the River Boyne spread out majestically before us (Photograph: Patrick Comerford, 2013)

It’s always a good resolution to try to see somewhere new and do something new on a regular basis throughout the year.

Instead of going for a walk on a beach this afternoon, I went for a walk along the Navan Boyne Ramparts Walk in Co Meath.

I have been in Navan many times before, and I have been on many walks along the banks of the River Boyne, but this stretch of the river was a new discovery for me today.

We had lunch earlier in the day with friends who live in Johnstown. It was sunny late morning as drove through the green and golden fields of Co Meath to Johnstown on the southern edges of Navan – not to be confused with Johnstown near Enfield.

After lunch, three of us drove into Navan to set out on the first stage of the Boyne Ramparts Walk. We began at the Ramparts Car Park, just a five-minute walk from the centre of Navan and a few hundred metres out the Athlumney Road from Navan, on the left before a fork on the road.

The full walk stretches for 8 km as far as Slane along the banks of the River Boyne, parallel with the old canal. 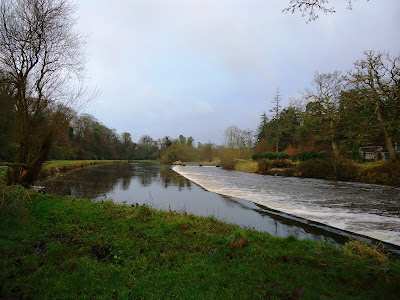 The waters of the Boyne at the weir (Photograph: Patrick Comerford, 2013)

We began at Ruxton’s Lock, and walked on with the river on our left and the old canal on our right, passing Blackcastle Point, the Weir and Athlumney Bridge and continued some distance towards Rowley’s Lock.

Despite the rain, there was a number of joggers along the path and people in ones and twos walking their dogs, but no anglers. 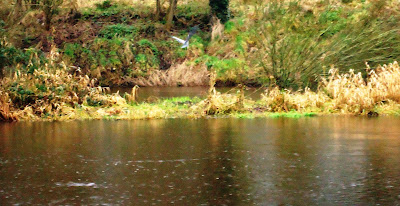 A heron rises near the weir (Photograph: Patrick Comerford, 2013)

The area has been designated a Special Area of Conservation. As we walked between the river and the canal, there was beautiful wooded scenery and wildlife, with majestic views of the river as it flows strongly but turns gently along the way. Before the weir, a waiting heron took flight. 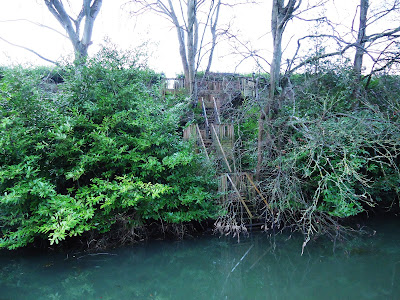 Steps down to the water from a house in Athlumney (Photograph: Patrick Comerford, 2013)

At Athlumney, there was a breath-taking set of wooden steps down into the water which begged questions about the carpenter’s skill and vision.

The full Boyne Ramparts Walk continues for a distance of 8 km from Navan towards Stackallen Bridge and Slane along the banks of the River Boyne, parallel with the old canal. But with darkness about to descend and the rain showing no sign of easing, we turned back and retraced our steps along the path to Ruxton’s Lock and the car park at the junction of the river and the canal. 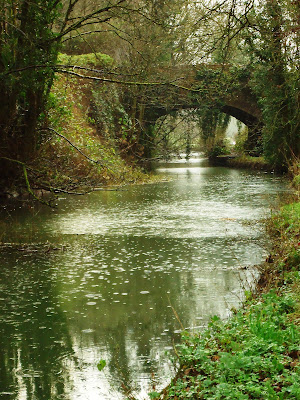 As we drove back east, the lights lit up Stackallen House on the left, standing on a hill above the river. The house was built in 1715-1716 by Gustavus Hamilton, the Lord Stackallen and who became 1st Viscount Boyne in 1717.

The house is now owned by Martin Naughton, who owns the Merrion Hotel and Glen Dimplex. Gustavus Hamilton originally named his new home Boyne House, and it is was easy to understand why he decided to take his title from this majestic river almost 300 years ago.

Trees and tree stumps in a winter scene by the banks of the River Boyne this afternoon (Photograph: Patrick Comerford, 2013)