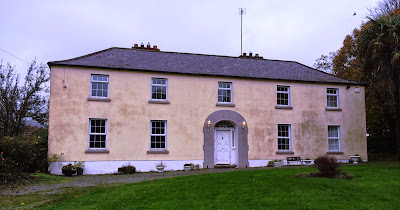 My search for places associated with Ludwig Wittgenstein’s visits to Ireland continued this afternoon with a visit to Kilpatrick House near Redcross, the house where Austrian philosopher lived and worked from December 1947 to April 1948.

Kilpatrick House is just minutes from Ballymoyle Wood, a large area of natural woodland hosting a rich variety of flora and fauna, while Brittas Bay is just 5 km east of the house. Glendalough, the Vale of Avoca and Avondale House and Forest Park are also close at hand. 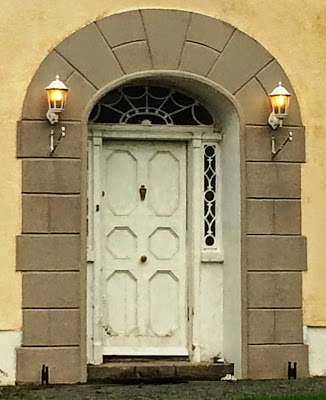 Kilpatrick House was built about 1750 by the Howard family of Shelton Abbey for their land agents (Photograph: Patrick Comerford, 2014)

Kilpatrick House was built around 1750 by Ralph Howard (1726-1786), 1st Lord Wicklow, a local landowner, as one of three houses to accommodate his agents or rent collectors. Lord Wicklow was eldest son of Robert Howard (1670-1740), Bishop of Elphin, and before becoming a peer was MP in the Irish House of Commons for Co Wicklow (1761-1765).

The last holder of the family title was William Howard, 8th Earl of Wicklow (1902-1978), who was educated at Eton and Magdalen College, Oxford, before entering Saint Stephen’s House, Oxford. His Oxford friends and contemporaries included Evelyn Waugh and John Betjeman.

After his ordination to the priesthood in the Church of England, he worked with the Magdalen Mission in Somers Town. He was a devout Anglo-Catholic, but he became a Roman Catholic in 1932, and from then on lived as a layman. He was disinherited by his father and banished from the family home at Shelton Abbey near Arklow on Sundays because he was seen as an embarrassment when he went to Mass with the servants. 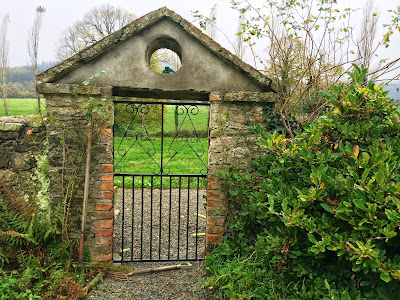 Kilpatrick House is close to all the attractions Co Wicklow has to offer (Photograph: Patrick Comerford, 2014)

Meanwhile, Kilpatrick House has been the Kingston family home and a working farm for three generations. The house first opened as a guesthouse in 1941, and one of the earliest and most eminent guests was the Austrian philosopher, Ludwig Wittgenstein, who stayed there from 1947 to 1948.

While he was staying at Kilpatrick House, Wittgenstein worked on one of his major treatises, Philosophical Investigations, now accepted as a classic of 20th century philosophy.

In his letters from Kilpatrick House to friends in Cambridge, Wittgenstein complains of feeling old and tired. “I have, somehow, an old soul,” he wrote on 5 February 1948. He complained of “occasional … states of nervous instability” that taught him how to pray.

In March 1948, he complained that his work was “progressing very slowly and painfully,” adding: “I wish I had more working power and didn’t tire so very easily … my brain feels very stuffy indeed.”

In another letter later that month, he said: “I often believe that I am on the straight road to insanity. It is difficult for me to imagine that my brain should stand the strain very long. That I dread this end I needn’t say … May our fate not be too terrible! and may we be given courage.”

While he was staying at Kilpatrick House, Wittgenstein kept in touch with his former Cambridge student and friend, Dr Maurice O’Connor Drury. Con Drury had once been an Anglican ordinand at Westcott House, Cambridge, but by the late 1940s he was working as a psychiatrist in Saint Patrick’s Hospital, Dublin, and Saint Edmundsbury’s Hospital, Lucan.

Wittgenstein and Drury met about once a month in Dublin while the Viennese philosopher was staying at Kilpatrick House. In April 1948, he had moved from Kilpatrick House to Con Drury’s holiday home in the west of Ireland, Rosro Cottage in Renvyle, Co Galway, and stayed there until the following October. This is now the Killary Harbour Youth Hostel.

From Co Galway, Wittgenstein moved to Ross’s Hotel, now the Ashling Hotel in Parkgate Street, and he remained there until June 1949. In all he spent 18 months in Ireland before returning to Cambridge, where he died in 1961. 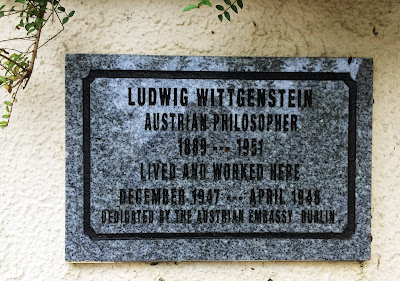 The plaque at the entrance to Kilpatrick House marking the 50th anniversary of Wittgenstein’s death (Photograph: Patrick Comerford, 2014)

To mark the 50th anniversary of Wittgenstein’s death, the Austrian embassy erected a plaque at the entrance to Kilpatrick House in November 2001. Every year, visitors from all over the world call to the house where Wittgenstein stayed, worked and found inspiration.

We were there on our own this afternoon, and we never got to see Saint Patrick’s Well in the grounds of Kilpatrick House. Local legend says Saint Patrick blessed the well before he set out on his journey north to convert Ireland to Christianity.

From Redcross, we had planned to return to the N11 at Jack White’s and to go for a walk on the beach at Brittas Bay. But the afternoon weather was looking dull and grey, and rain was threatening. Instead we had a late lunch in an autumnal setting at the Avoca Garden Café in Mount Usher Gardens near Ashford, and a stroll through the garden centre and shops before heading back through the Glen of the Downs to south Dublin. 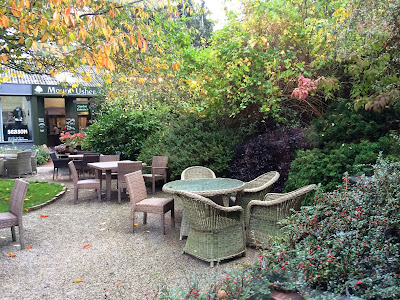 Posted by Patrick Comerford at 19:40 No comments:

‘By thy Cross and Passion,
Good Lord, deliver us’

‘By thy Cross and Passion, Good Lord, deliver us’ (Litany 1) … a carving at the end of a prayer desk in the Church of Saint Michael and All Angels, Penkridge, Staffordshire (Photograph: Patrick Comerford, 2014)

The Litany has the advantages of both simplicity and of praying for everything, including those things we are likely to leave out of our prayers.

The Church of Ireland Directory is mistaken when it comes to the Psalms for this morning, and repeats yesterday’s appointed Psalms. But the appointed readings being used this morning (Psalm 90, Revelation 13: 1-10) are reminders that in the Calendar of the Church we are preparing for All Saints’ Day (1 November), All Souls’ Day (2 November), and Remembrance Sunday (9 November).

Of course many people who are celebrating Hallowe’en this evening will have no idea of how this day has deep roots in the Christian calendar. When he was Dean of Liverpool, Archbishop Justin Welby designed a service to appeal to a new generation that is not associated with church-going, and called it ‘Night of the Living Dead.’

It was an inventive, creative and appropriate title, for Hallowe’en ought not yo be about ghouls and ghosts but instead ought to be the evening of preparation for All Saints’ Day. Then, if we truly believe that those who have died in Christ are alive in him, an evening preparing for remembering all the saints would be appropriately a joyous night for celebrating and remembering the living dead.

Many of the verses in Psalm 90 which we are parying this morning are incorporated into the traditional biddings and prayers for Remembrance Day, and the reading from the Book of Revelation concludes with the verses:

Let anyone who has an ear listen:
If you are to be taken captive,
into captivity you go;
if you kill with the sword, with the sword you must be killed.
Here is a call for the endurance and faith of the saints (Revelation 13: 9-10).

I am speaking tomorrow afternoon [1 November 2014] at the autumn conference of the Church of Ireland Historical Society in Christ Church Cathedral, Dublin, on ‘The Archbishops of Dublin and the Deanery of Penkridge: a mediaeval peculiar in the Diocese of Lichfield.’

In preparing my PowerPoint illustrations for this paper, I came across a photograph from Penkridge Church that I have used on the cover of the brochure for this morning’s service.

It is a carving on the end of a prayer desk and has a simple quotation from the traditional version of the Litany in the Book of Common Prayer.

The Collect (All Saints’ Day):

Almighty God,
you have knit together your elect
in one communion and fellowship
in the mystical body of your Son Christ our Lord:
Grant us grace so to follow your blessed saints
in all virtuous and godly living
that we may come to those inexpressible joys
that you have prepared for those who truly love you;
through Jesus Christ our Lord.