The pleasure of being part of
Greek journalism for a day 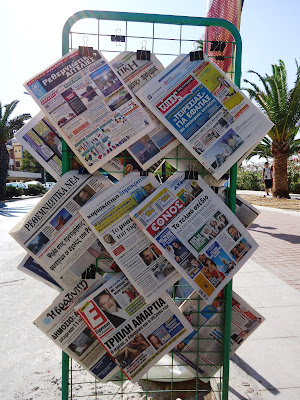 ‘The kiosk. / Standing on its feet all day/ with its small-stock melancholy, / dressed / in its afternoon papers’ (Kiki Dimoula) ... afternoon newspapers on sale at a kiosk in Rethymnon (Photograph: Patrick Comerford, 2013)

Greece is a wonderful newspaper-reading society. Every island, town and city seems to have its own newspaper, many of them daily newspapers. Iraklion in Crete has at least three daily newspapers. When I am in Greece I enjoy reading local and national newspapers – in Greek and in England.

Greek journalists work under trying and dangerous conditions. They are often targeted by police when they are covering demonstrations and many have received threats from the extreme right, the ultra left and anarchists.

Most Greeks buy their favourite daily newspapers in the afternoon at their local períptero (περίπτερος) or kiosk – a part of everyday life in Greece and an essential element of the streetscape of every Greek city and town.

The readers of The Athens News included diplomats, journalists, and members of Greece’s English-speaking and foreign community who relied on the newspaper to keep abreast of domestic and international events. The Athens News was also essential reading by Greek politicians, civil servants and businessmen as well as Greeks abroad.

After 49 years as a daily newspaper, The Athens News became a weekly newspaper on 16 March 2001. But it remained essential reading for many English-speaking people in Greece, and it was a pleasure to be a guest contributor to The Athens News, reviewing the exhibition Byzantium 330-1453 at the Royal Academy of Arts in London in early 2009.

However, with the collapse of the Greek economy and increasing competition, The Athens News fell on hard times, and its last printed issue was published a year ago on 5 October 2012.

There were lingering hopes that the newspaper might find a new investor who would rescue the title. But the website was finally taken down in March 2013.

Some of the former journalists with The Athens News have faithfully maintained the Facebook page, others have been involved in setting up a new English-language newspaper, Athens Views, which hit the newsstands and the kiosks or periptera across Greece two months ago on 2 August.

Athens Views is an independent weekly newspaper offering in-depth analysis of current affairs, politics, the economy, the arts and life in Greece, and is supported by an excellent Facebook page.

Meanwhile, Greece’s leading conservative political and financial daily newspaper, Kathimerini (Η Καθημερινή, ‘The Daily), continues to publish an abridged daily English-language supplement that is part of the editions of the International Herald Tribune sold in Greece and Cyprus.

Kathimerini, which dates back to 1919, was created by Georgios Vlahos and was then owned by his daughter, Eleni Vlahou, and her husband, Constantine Loundras. Eleni Vlahou, who was revered as the Grande Dame of Greek journalism, sold the title shortly before her death, and Kathimerini has been owned by Aristidis Alafouzos since 1988.

An exciting development, with immense potential in recent months is EnetEnglish, an independent, online news service focused on Greece. This online service was launched six months ago [20 February 2013] and is backed up by a Facebook page that gives access to the main website and can also be followed on Twitter.

EnetEnglish is dedicated to serving an international readership, in Greece and around the world, with timely, unbiased and comprehensive coverage and analysis of events in Greece and the region.

In the past week, its news coverage of the arrest of the leading members of the Neonazi hate gang, Golden Dawn, which poses as a political party, has been invaluable. With its comprehensive and analytical news reports and features, photographs and cartoons, backed up by an up-to-minute blog roll, it is unmatched by any other Greek news site.

EnetEnglish covers political and foreign affairs, the economy, immigration, social issues and sport. It will offer opinions and analysis from across the political spectrum. In addition, there is a special section, Community, dedicated to helping the international community living in Greece.

EnetEnglish is a division of one of my favourite Greek newspapers, Eleftherotypia (Ελευθεροτυπία), a national daily with sympathies on the left in Greek politics. It was founded in 1975, a year after the collapse of the colonels’ regime and the restoration of democracy in Greece.

It faced severe financial problems two years ago. Only four editions were published in 2011, and the newspaper filed for bankruptcy that December. But Eleftherotypia and its internet site, Enet, were relaunched at the beginning of this year [10 January 2013].

EnetEnglish was set up to meet a demand for objective news coverage of Greece, within Greece and around the world. The site supports making Greece’s democracy and economy more transparent, meritocratic and accountable. The publishers and editorial staff support a media environment in which journalism serves the public as the final arbiter in any democratic process.

The publisher is Harris Ikonomopoulos and the staff include Damian Mac Con Uladh, who is also known in Ireland for his reports and analysis of Greek politics and life in The Irish Times.

Earlier today, EnetEnglish reposted my blog posting from Rethymnon on the periptero or kiosk that is found on almost every street corner in Greece, and that serves as much more than newsstands.

The posting was quickly reposted on the Athens News and has already been shared on countless Facebook pages, leading even to some new Facebook friends.

One Greek diplomat, now living back in Athens, commented: “From one who knows Greece probably much better than most Greeks, who has an amazing understanding and genuine love for Greece.” We have been good friends for many years, but to read her comments still brought a smile to my face.

Other comments include “Beautiful words,” “this is so true,” and “A charming and culturally educational essay.”

Earlier in the week, it was reposted on the site Real Corfu.

It has been a true pleasure to be part of EnetEnglish, Eleftherotypia and Greek journalism today.