Good news in a dark time 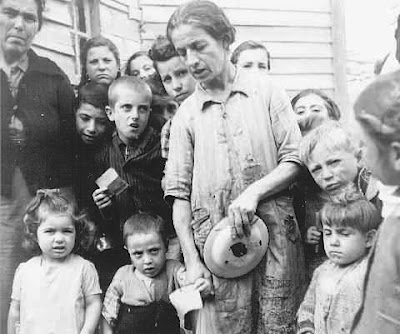 Children in hunger on the streets of Athens in the 1940s

The Irish Times, on its leader page (page 17) this morning [24 December 2012], carries the following full-length editorial:

Good news
in a dark time

As the winter chill closes in, a chilling photograph of children begging in the streets of Athens has gone viral on social media sites in Greece, including blogs and Facebook. The photograph of destitute and distressed children is accompanied by an account by a starving nine-year-old who says these hungry children know nothing of Christmas, and have never seen Christmas trees or Christmas decorations. He talks about his little cousin being shot in the head as they search for food, and he describes orphaned children huddling at home that Christmas Eve in 1944, without light, heat or food. The only pleasure the boy finds that Christmas Eve is one chocolate egg. Today, in their financial distress, Greeks are asking what is different this Christmas Eve, almost 70 years later.

As a consequence of the German occupation, an Allied blockade and the civil war that followed, Greeks suffered immense poverty in the 1940s. One immediate response to that Greek wartime poverty was the formation of Oxfam in 1942 by a group of Quakers, social activists and academics in Oxford. Greeks today are feeling besieged and asking whether their plight is going unnoticed by their European neighbours, wondering where any compassionate responses might come from.

The Christmas story is essentially the story of God’s response to the distress and the plight of humanity in a bleak and dark moment in the winter of history. The nativity account in Saint Luke’s Gospel – the Gospel reading in all major churches on Christmas morning – locates the first Christmas in a specific place and during a particular moment of oppressive rule under Emperor Augustus. This Gospel reading is linked with the Old Testament promise from the prophet Isaiah: “The people who walked in darkness have seen a great light.”

On Christmas morning this year, many people throughout Europe will awake wondering whether there is light at the end of the tunnel. And the task of the churches must be to repeat the words of the angel who told terrified and huddled shepherds on a cold, windswept and snow-covered hillside: “Do not be afraid; for see – I am bringing you good news of great joy for all the people ...”

Taking this message to heart means churches should be sources of great joy for all, especially at Christmas time. Instead, to many at Christmas time, our churches are in danger of being irrelevant, negatively obsessed with inherited bigotries about women bishops or gay marriage. They are in danger of being seen as comfortable and snug places only for comfortable and sometimes smug people.

The cold-heartened response of some to those who are suffering most at this Christmas time almost echoes the words of Scrooge in A Christmas Carol when he sees the afflictions of poverty in his Christmas Eve dream. A charity fund-raiser says to him: “At this festive season it is more than usually desirable that we should make some slight provision for the poor and destitute ...” “Are there no prisons?” asks Scrooge ... “And the Union workhouses? ... Are they still in operation? ... Those who are badly off must go there.”

Yet it takes a small child to get to the heart of the meaning of the birth of a small child in poverty that first Christmas. Charles Dickens brings together the needs of a small child and the call to respond with the love of Christ at Christmas time when he portrays Bob Cratchitt taking his son Tiny Tim – who walks with a crutch – to church on Christmas morning: “‘And how did Tim behave?’ asked Mrs Cratchitt ... ‘As good as gold,’ said Bob, ‘and better. Somehow he gets thoughtful, sitting by himself so much, and thinks the strangest things you ever heard. He told me, coming home, that he hoped the people saw him in church, because he was a cripple, and it might be pleasant to them to remember, upon Christmas Day, who made lame beggars walk, and blind men see.’”

Posted by Patrick Comerford at 09:39 No comments: