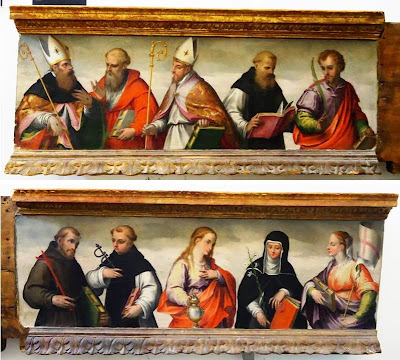 While I was travelling through the Sorrento and Amalfi region of Italy earlier this year, I was delighted to find that each town and city had its own cathedral or duomo, and that each duomo, almost invariably had its museum, often with a treasure of art works collected locally but largely unknown beyond the locality.

Typical of these cathedrals is the Duomo in Ravello. Although Ravello is a small town with only 2,500 inhabitants, it is known for its annual opera festival and the town is a Unesco World Heritage site that includes the Villa Rufolo, where the gardens inspired the setting for Wagner’s Parsifal.

The Duomo in the town centre was originally built in 1086, although the later façade dates from the 16th century. Inside, there is a pair of striking pulpits.

The cathedral museum has a small but interesting collection of religious artefacts, and I have chosen two 16th century paintings from this museum as my choice of Art for Advent this morning [23 December 2013].

These two paintings, which are oil on wood, are the work of Giovanni D’Angelo D’Amato, and are part of a polyptych he painted for the Trinity Benedictine Monastery in Ravello, depicting the Transfiguration, Our Lady of the Rosary, and the Mysteries of the Rosary.

The abbey was suppressed in 1812, and the Benedictine nuns there were moved to the Monastery of Salerno. However, the convent and its possessions became the property of the Church of Saint Michael the Archangel in Torello. Later, the paintings were later moved from Torello to the cathedral museum in Ravello.

This morning’s paintings form a predella that depicts an array of saints and martyrs.

The first painting depicts (from left):

1, Saint Benedict, the founder of western monasticism.
2, Saint Hieronymus or Jerome, who translated the Bible into Latin (the Vulgate).
3, Saint Augustine of Hippo, one of the first systematic theologians; in a famous sermon, Saint Augustine said: “God was made man, that man might be made God.”
4, Saint Aniello, an Italian Franciscan saint.
5, Saint Pantaleon, a fourth century martyr who was the patron of medicine.

The second painting depicts (from left):

6, Saint Francis of Assisi.
7, Saint Leonard, a sixth century abbot and the patron of prisoners.
8, Saint Mary Magdalene.
9, Saint Scholastica, the twin sister of Saint Benedict.
10, Saint Ursula, who was martyred on a pilgrimage to Rome; she was from south-west Britain, and is shown here with the flag of England, the cross of Saint George.

I have not chosen these paintings because of their tenuous associations with Christmas – Saint Francis is credited with creating the first Christmas crib, while Saint Leonard was converted to Christianity at Christmas 496. Instead, I have chosen them because, with only two days to go to Christmas we should remember that our Christian faith has been handed down through the centuries by saints and martyrs, by faithful monks and nuns, by bishops and theologians, by writers and translators, and by the whole heavenly company.

Our Christmas celebrations should never forget how the faith has been passed on down the generations, often at a cost but always by people who trusted more in advent of the Kingdom of God than in the present attractions of the kingdoms of this world.

And these saints remind us that the Incarnation is an ever-present reality. As Saint Augustine once said: “Do not grieve or complain that you were born in a time when you can no longer see God in the flesh. He did not in fact take this privilege from you. As he says, ‘Whatever you have done to the least of my brothers, you did to me’.”

Tomorrow: ‘The Nativity,’ by Edward Burne-Jones