A hidden beach and a welcome break 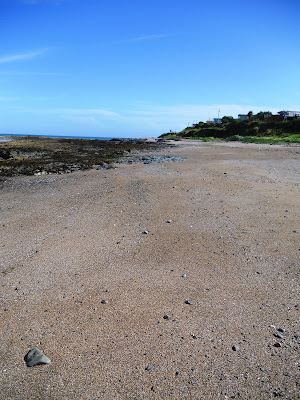 The beach and rocks below The Quay in Portrane were like a hidden beach in Santorini this afternoon (Photograph: Patrick Comerford, 2012)

I spent most of the afternoon in the heat of the big red-and-white marquee in Mary Lynders’ yard at the Quay in Portrane, working on the bookstall at the great bank holiday sale in aid of Heart-to-Hand and its projects in Romania and Albania.

It was raining when we arrived at mid-day, the ground was still wet from the heavy rains of recent weeks, and all the forecasts were predicting rain throughout the afternoon throughout Leinster. But the rain had eased off, even before the gates to the sale opened, and the sun was shining.

The big marquee is against a wall looking down on the surviving remains of the old quay for Lambay Island that gives the house its name. To the left (west) the shoreline eventually opens out in the Burrow Strand, with views across to Rush.

By mid-afternoon, the sunshine was beautiful, and the sky was a clear blue. I took a break and made my way east behind the yard, and down onto a smaller beach, with grey sand and black rocks. The sand was warm and inviting, the rocks were basking in the sunshine, and as I looked south towards Tower Bay I thought if I squinted my eyes I could imagine I was on a hidden beach in Santorini. 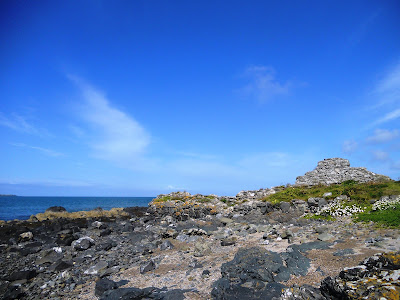 The crumbling remains of the old quay for the boat to Lambay Island in the sunshine in Portrane this afternoon (Photograph: Patrick Comerford, 2012)

I walked back around the crumbling quay wall, and took a few more minutes on the rocks and in the sunshine, before returning to the marquee and the day’s task.

By the time we were leaving Portrane this evening, the tide was out on the Burrow Beach, a few sandbanks had appeared in the water and one heron was busy on the edge of the shoreline.

If you join me either afternoon, we can have another walk along the beaches of Portrane, even if the weather lets us down. 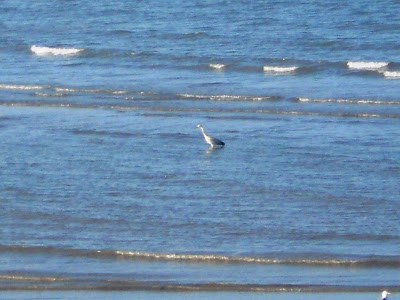 A lone heron working his way along the shoreline in the evening sunshine in Portrane (Photograph: Patrick Comerford, 2012) 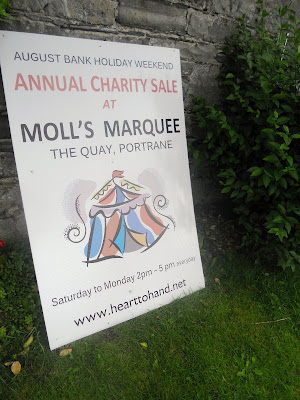 The tents and the big marquee are up, the stalls are out and the sale begins this morning [Saturday 4 August 2012] For the next three days, Saturday, Sunday and Monday, the Portrane peninsula will be busy with one major obsession – the sale Mary Lynders, he family and her friends have organised for the August Bank Holiday weekend in aid of Heart-to-Hand and the projects it supports in Romania and Albania.

The present economic crisis has taken a particular toll in both Romania and Albania. Food prices continue to rise in Romania, and VAT is at 24%. Another shipment is on its way to Romania, with food, clothes, building supplies and other essential items.

Part of the money that has been raised in recent weeks and sent out to Romania is being spent on buying shoes for children in preparation for the new school term that begins next month.

Sister Rose Carmel McNamara, one of the people supported by Heart-to-Hand, is working with 77 children, says: “Sickness also abounds, possibly due to the poverty. Before the opening of the new term we will endeavour to ensure that our children have the essentials for school.”

Are you going to join me in Portrane on the afternoons each day? Perhaps I’ll see you at the bookstall in the big marquee.

I might even get a break and take a walk on the beach in Portrane one afternoon.