An afternoon in Iraklion, the city of Saint Titus and El Greco 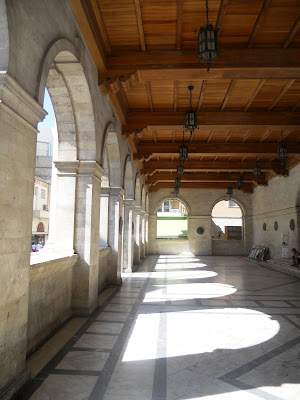 The Loggia in Iraklion takes on a cloister-like appearance in the afternoon sun (Photograph: Patrick Comerford, 2012)

Manoli and Lena Xrysakis have been good friends for almost 20 years. We were their guests for many years in Piskopianó, in the hills above the resort of Hersónisos, and it is wonderful to build on that friendship each time we visit Crete.

We met them in their home city of Iraklion for lunch yesterday afternoon [Tuesday 3 July 2012] and spent two or three hours together at Geronimos, a quiet restaurant in Riga Ferraiou Square, close to their home, catching up on old news and friends we share, meeting their family and neighbours, and hearing first-hand about the impact of the economic and financial crises that are hitting Greece.

It is distressing to hear about the number of suicides that have affected every family in Crete in recent months, the fall in tourism which is a direct blow to the economy of Crete, and the way forced austerity measures are having a crushing effect on small businesses. 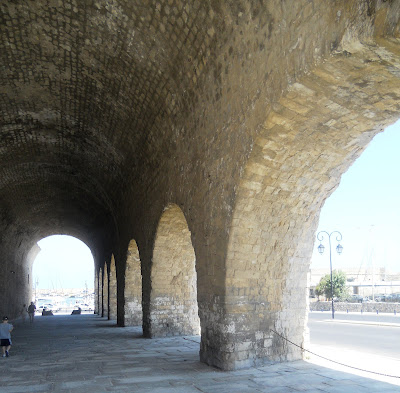 The Venetian Arsenali ... part of the legacy of Iraklion (Photograph: Patrick Comerford, 2012)

We arrived by bus from Rethymnon, and walked through the old Venetian Harbour area, by the fortress which stands guard over the harbour and through the Arsenali, before turning into Odhos Martirion 25-Avgoustou, Iraklion’s elegant main shopping centre which takes its name after a crucial event in 1898 leading to the forced departure of all Turkish troops from the city.

The street is lined with boutiques, souvenir shops and department stores, but also includes some of Iraklion’s most important Venetian buildings, including the Loggia, San Marco or Saint Mark’s Basilica and the Morosini or Lion Fountain.

The Loggia was the principal meeting place for the Venetian nobles of Candia (Iraklion). Here they met to discuss politics, plan business deals and exchange information. The tall building is far more impressive than the single-storey Loggia in Rethymnon.

San Marco was the Cathedral of the Venetian city and became a mosque under Turkish rule. Today the restored basilica is used for concerts, lectures and exhibitions. 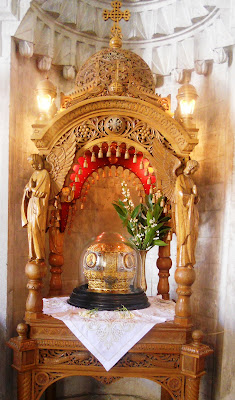 The reliquary with the head of Saint Titus was returned from Venice in 1966 (Photograph: Patrick Comerford, 2012)

In a little square to the east of the street, we visited the Church of Aghios Títos (Saint Titus). It has had a chequered history first as a Byzantine church, then as a Venetian church, and then as an Ottoman mosque. As a mosque, it was roofed with a large dome, and rebuilt as a mosque after an earthquake in 1856. But when the Turkish population left Iraklion, this became a church once again, and reverted to its original name.

Saint Titus was the companion of the Apostle on his missionary visit to Crete, and the saint’s head is preserved in a reliquary to the left of the entrance to the church. The relic was brought to Iraklion from Gortys in the Byzantine period, but was later carted off to Venice, which may have saved it from destruction by the Ottoman Muslims. The saint’s head was returned to Iraklion in 1966, and is brought through the city in procession on 25 August each year. 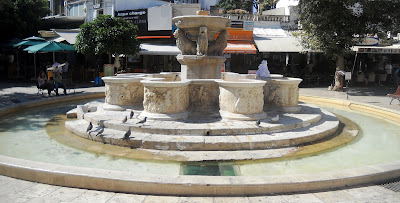 The Morisini Fountain was once the city’s principal source of fresh running water (Photograph: Patrick Comerford, 2012)

At the top of the street, Platía Venizélou is known locally as Lion Square, but in Venetian times this was Piazza San Marco. In the centre of the square, the Morosini Fountain dates from 1628 and was once the city’s principal source of fresh running water. The lions guarding the eight-sided fountain are 200 or 300 years older than the rest of the structure and they, in turn, replaced an original statue of Neptune.

From there, it was a three-minute walk east along Kalokerinoú Street and up a side alley to Platía Ekaterinas or Saint Catherine’s Square, with three interesting churches. 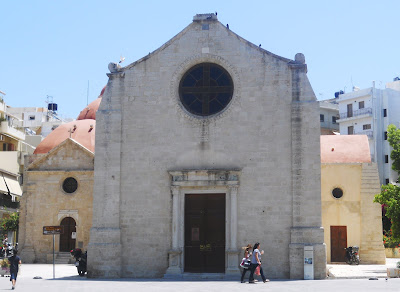 The tiny church of Aghía Ekateríni was once the centre vof the Cretan renaissance in the 15th to 17th centuries (Photograph: Patrick Comerford, 2012)

Aghía Ekateríni was closed, but this is the most interesting church in the city. Dating from the 16th century, this church was linked with Saint Catherine’s Monastery in Mount Sinai and its school was the centre of the Cretan Renaissance after the fall of Byzantium and before Venetian Crete was captured by the Ottoman Turks. 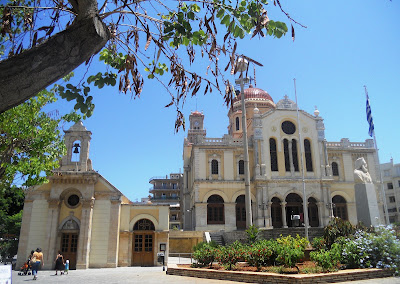 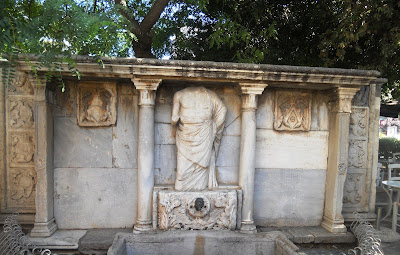 After lunch we walked through the market in Odhós 1866 to Platía Kornárou, where an old six-sided Turkish pumphouse serves as a café. Behind the café is the Bembo Fountain, which was designed by Zuanne Bembo in the 16th century. This was the first fountain to bring the town with fresh running water. It is decorated with Venetian coats of arms and the centrepiece is a headless Roman torso.

We spent a little time among the flowers and the sculptures in El Greco Park before heading back for the bus. 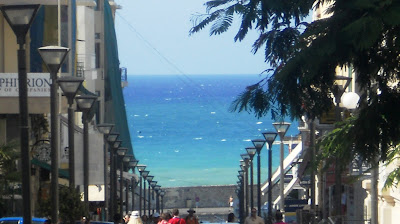 Below us, the blue sea seemed to rise up to greet us, framed between the lampposts and the buildings of the street (Photograph: Patrick Comerford, 2012)

As we strolled back down Odhos Martirion 25-Avgoustou, past San Marco and the Loggia, the street seemed empty compared with the mid-day bustle, and many of the tourists had probably made their ways back to the resorts of Hersónisos and Mália.

Below us the blue sea seemed to rise up to greet us, framed between the lampposts and the buildings of the street.

Back in Rethymnon, in the late evening, we had dinner in the Lemon Tree Garden restaurant, behind Saint Francis Church and the Nerantze Mosque, listening to traditional Cretan music and enjoying the sound of children playing in the square behind us.

Posted by Patrick Comerford at 07:01 No comments: