Interfaith consultation with
the Muslim community 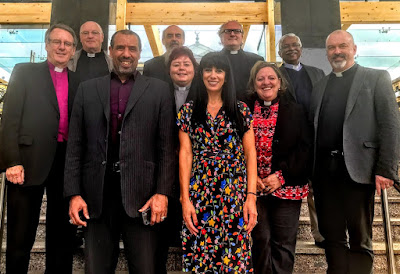 Bishop Kenneth Kearon and Canon Patrick Comerford of the Rathkeale Group of Parishes took part in the Church of Ireland interfaith consultation last month [12 September] that focused on engagement with the Muslim community in Dublin.

The day was organised by the Interfaith Working Group of the Church of Ireland, chaired by Bishop Kearon.

The principal speaker was Dr Ali Selim, the resident theologian at the Islamic Cultural Centre of Ireland (ICCI), who has studied at the Irish School of Ecumenics and lectured in Trinity College Dublin, where Bishop Kearon is a former director.

The previous interfaith consultation earlier this year [5 March 2019] included a seminar with Rabbi Zalman Lent and a visit to the Dublin Jewish Museum in Portobello, an area also known as Dublin’s ‘Little Jerusalem.’

Earlier in September, Bishop Kearon and Canon Comerford were guests at the unveiling of a plaque in the community centre in Templeglantine to recognise the work of Michael (Max) Arthur Macauliffe (1841-1913), who is still for his translation of Sikh scripture and history into English.

The attendance include representatives of the Sikh community in the Mid-West, church leaders, people involved in interfaith dialogue, local politicians and council officials, as well as members of the local community, including teachers and pupils from the school Max Macauliffe once attended in Templeglantine, near Newcastle West, Co Limerick.

Limerick City and County Council was approached by the Dublin Interfaith Forum last year about ways to honour the man from West Limerick. The commemorations were organised by representatives from the Sikh community, Limerick City and County Council and local historians. The speakers included the Indian ambassador, Sandep Kumar, and Dr Jasbir Puri of the Sikh Community.

‘These interfaith encounters are positive experiences of face-to-face dialogue and an opportunity for the Church of Ireland to engage with the cultural and religious diversity that is contributing positively to shaping Irish identity today,’ Canon Comerford said.

Inside the mosque in Clonskeagh during the interfaith consultation (Photograph: Patrick Comerford, 2019)

This full-page news report is published in the October 2019 edition of ‘Newslink,’ the Limerick and Killaloe diocesan magazine (p 20)

The synagogue at 11 Lombard Street West in the Portobello area of Dublin was founded in 1890 or 1893 and continued until the 1960s (Photograph: Patrick Comerford, 2019)

According to Louis Hyman in The Jews of Ireland, the Chevrah Tehillim Synagogue at 46 Lombard Street West in 1893 was one these many hebroth established in this area by the recent immigrants from Lithuania and Poland.

Louis Hyman says the Chevrah Tehillim Synagogue was founded in 1893, although the Jewish Year Books say it dates from 1890.

James Joyce in Ulysses has Leopold and Molly Bloom living nearby at 38 Lombard Street West in 1893.

In her soliloquy in Ulysses, Molly Bloom recalls 1893, the year ‘the canal was frozen’ and how she had too many oranges and too much lemonade at a party in the Comerfords’ home in Clanbrassil Street. She was caught short on the way home to Lombard Street that night, and recalls how she had to use the men’s toilets in a pub, with great personal discomfort.

The synagogue closed in the early 1960s, due to the decline in the Jewish population in the area, with many people moving to the southern suburbs of Terenure, Rathfarnham and Churchtown, and the building later became a clothing factory.

The former synagogue was on the market earlier this year, when it was described as ‘a truly unique former synagogue boasting a very spacious interior ideally located in the heart of Portobello on the doorstep of the city centre ... This red brick property incorporates an adjoining terraced property and dates from the 1890s.’