Our tradition is constantly calling us out of our tribalism

Bishop Tim Stevens introduces the panel discussion on the last day of this week's conference in Saint Philip’s Centre, Leicester

There was a beautiful sunset at Birmingham airport last night, with the sun remaining as a red balloon low in the sky for 10 or 15 minutes before it finally dropped below the horizon. It was a peaceful finale to the three-day conference on interfaith relations that over a dozen people from the Church of Ireland had been attending in Leicester this week.

Earlier in the morning, the Revd Dr Andrew Davey, who works at Church House in Westminster as national adviser on community and urban affairs to the Archbishops’ Council, was one of the speakers at the conference in Saint Philip’s Centre who introduced the need to address political extremism in our engagement with faith communities.

Leicester was an appropriate setting for this, following a major demonstration by English Defence League last October, when – as Bishop Tim Stevens told us – the cathedral played an “iconic and pivotal role in praying for the peace of the city.”

The demonstration was a reminder of risks we live with, Bishop Tim said, and the “great enemy is complacency.”

Political extremism is posing as the true voice of English Christianity, and we need to understand the Biblical foundations for resisting racism and countering far-right extremist political parties.

He was clear in saying bishops need to be more proactive. There is a danger of thinking everything all right when it is probably not so.

The Archbishop of Canterbury had spoken recently of instincts within the Church for tribalism that are deep-seated. “But our tradition is constantly calling us out of our tribalism,” and Bishop Tim reminded us of the great challenge of what it is to be the new humanity, the new creation. “That is what the Eucharist is about, that is what the Gospel tradition to be about.”

We need to think carefully about how to be a credible witness to a world that is prey to political extremism, he said, for the BNP, the EDL and others are aware of the disaffection, pain and anxiety being created by economic and financial policies. 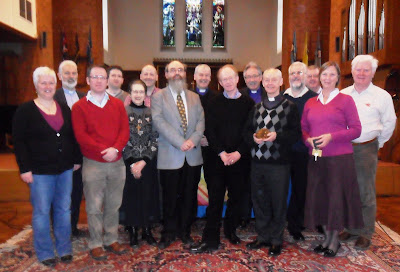 On the last day of this week's conference in Saint Philip’s Centre, Leicester

Andrew Davey highlighted the new agenda being posed by racists who deny being racists, holocaust deniers who accuse others of being fascists, and self-styled patriots who distort the image of the nation.

Who looked at the roots of the BNP in British fascism, tracing its history through Oswald Moseley, John Tindall, the National Front and Enoch Powell’s “rivers of blood” speech in 1967 to its present standing in elections at European, national and local level.

Despite its smart veneer, the image is superficial and the core remains fascist, he said. Opposition to immigration remains at heart of programme, expressed in the demonisation of Islam, which is portrayed as colonising and an invading threat.

It has grown in areas that have been marked by “white flight,” and the “normalisation” of the party is in danger of taking hold.

Racism denies reconciling work of Jesus Christ, our common humanity, and that all are made in God’s image, he said. “We find our identity not in racial categories but in our shared humanity.”

The English Defence League, which operates on the fringes of BNP and organises among football hooligan networks, has been disruptive presence on English streets since 2009, and could grow into a political force in its own right. It expresses a new selective and cultural racism, directed against all Muslims.

Dr Davey was followed by a panel of speakers who shared local stories.

Detective Inspector Geoff Brookes spoke about the value of real partnerships with the community that were already in place by the time of the EDL demonstration in Leicester last October.

Raheema Caratella, spoke her work as youth engagement worker at Saint Philip’s and of the work of the Leicester Interfaith Youth Hub.

A local Labour councillor, Mohammed Dawood, spoke of “our great city,” where the faith communities had publicly stated: “An attack on one of us is an attack on all of us.”

In a recession, it is easy to blame the other, he said. Leicester may be an harmonious city, but there are challenges ahead economically, and austerity and lack of jobs pose continuing challenges.

Bishop Trevor Williams of Limeick and Killaloe spoke of the experiences of facing up to sectarianism in his work in the Corrymeela Community in Co Antrim, in a parish in West Belfast, and through the Hard Gospel project in the Church of Ireland. We must risk vulnerability one step at a time, he said.

The Revd David Howell, a Baptist minister from Derbyshire, spoke of the slow initial response from local churches to the BNP’s ‘Red, White and Blue Festival” on a farm in Derbyshire. Since there have been prayer vigils in the local parish church, supported by local MPs and people from different churches.

He drew attention to the far-right activities of the Revd Robert West., and the activities of a local BNP councillor in the Amber Valley who constantly challenges interfaith initiatives at local school, asking what a visit to a mosque has to do with education.

At the end of the panel discussion, Bishop Tim said the responsibility of a Christian leader includes showing what relationships should be like if we were living out the whole Gospel.
Posted by Patrick Comerford at 12:30 No comments: