Saturday afternoon ... and time to walk on the beaches at Portrane and Bettystown 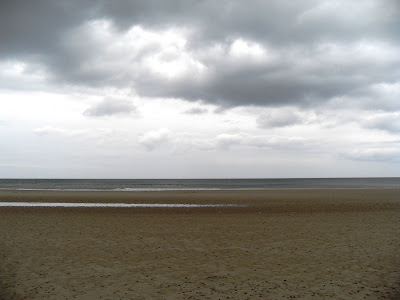 Dark clouds gathering over the broad stretches of sand on the beach at Bettystown, Co Meath, late this afternoon (Photograph: Patrick Comerford)

Long ago i learned to write my sermons as early in the week as possible. And I learned too that even if I’m not preaching to read the Sunday Lectionary readings and at least ten days in advance and to think on them constantly so that I can engage with the sermon, and be prepared to peach at short notice.

This practice has normally left me with Saturdays that are free of pressure and demands. A late night last night at dinner with good friends still left me free to spend the afternoon on the coast.

After an early lunch I visited cousins in Portrane, and received a surprise gift of a bottle of Bordeaux brought back from a holiday in France.

From The Quay, there was a clear view across to Rush, and one lone yacht sailing between the Quay and Lambay Island. Out from the Burrow Beach, two teenagers were playing joyfully in the water and swimming, paying no regard to the fact that weather has become noticeably chilly these days or that dark clouds were threatening to gather. 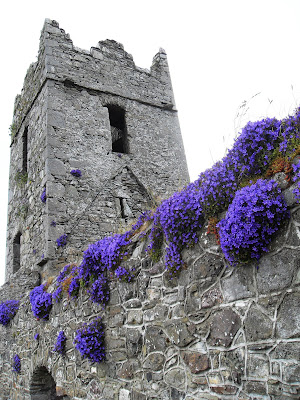 In Portrane itself, I noticed beautiful purple flowers that were in full bloom on the ruined walls of old Saint Catherine’s Church. My grandparents, great-grandparents and many other generations on that side of the family are buried in the old churchyard, but it was sad to see inside the ruins of this former Church of Ireland parish church that the gravestones of members of the Evans family, who once owned Portrane House, are crumbling and many of them are now difficult to read.

Relish has a picturesque location at the end of a terrace of cottages above a sandbank overlooking the beach at Bettystown, Co Meath (Photograph: Patrick Comerford, 2011)

The two of us then drove back through Donabate, onto to the M1 and north to Bettystown on the “Gold Coast” of Co Meath. There we had an early dinner in Relish, the most picturesquely located café in this part of Ireland, at the end of a terrace of cottages poised on top of a sandbank and looking out over broad stretches of soft sand at Bettystown and out to the Irish Sea.

Later, we stepped down onto that beautiful golden beach and started strolling south towards Laytown. It was still early in the evening, but the gathering clouds made it feel darker and colder and threatened rain.

We bought the Guardian in Donovan’s supermarket, some bread for tomorrow morning’s Eucharist in All Saints’ Church, Grangegorman.

We stopped outside Julianstown to photograph an old thatched cottage that has recently been refurbished. And then we headed back through Gormanston, Balbbirggan and the city centre to my office to collect my robes and print out that Sunday sermon.
Posted by Patrick Comerford at 21:03 No comments: