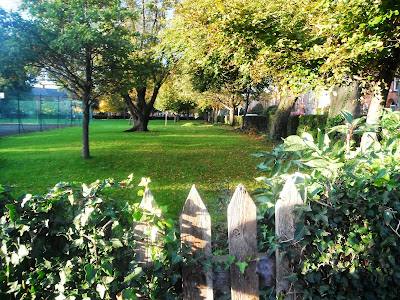 Brighton Square, where James Joyce was brought to play as a small child, has a subdued elegance, with its picket fences and mature trees (Photograph: Patrick Comerford, 2013)

I finished work for the week in mid-afternoon [25 October 2013] and two of us went for coffee in Mayfield Deli and Eatery, on the corner of Brighton Square and Terenure Road North.

Although Mayfield is a local neighbourhood restaurant and café, with freshly baked scones and cakes, and an energizing double espresso, it also has a kitchenware section and Union Square restaurant is next door. 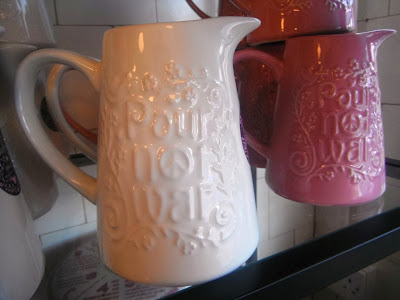 ‘Pour not war’ ... a message on kitchenware for sale in Mayfield (Photograph: Patrick Comerford, 2013)

My widowed grandmother lived around the corner in Ashdale Park for many years, and two aunts and two uncles continued to live in that house for years afterwards.

I often visited that house in my childhood and teens, but the area did not have such good coffee shops and restaurants in those lean years.

I sometimes wonder what it was like for them living in area where WB Yeats had lived as a child and where James Joyce was born.

We had parked on Brighton Square, and so before leaving, we took a walk around the square that, in reality, is a triangle. But then, Brighton Triangle does not sound as elegant as Brighton Square.

This was once a charming and respectable Victorian suburb, with terraced and paired redbrick houses that give this part of south Dublin some of its charm and character. It was an area of eminent respectability and had no room for peasants or poverty. 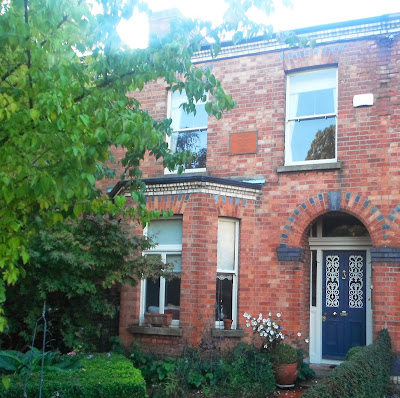 John Stanislaus Joyce, a rate collector from Cork, and Mary Jane Murray, who lived on Terenure Road North, were married in the Church of Our Lady of Refuge, Rathmines, on 5 May 1880.

They first lived at 47 Northumberland Avenue, Kingstown (Dun Laoghaire), but moved to Brighton Square by 1882, and James Augustine Joyce was born on 2 February 1882 in No 41 Brighton Square, the eldest of 10 children – six girls and four boys.

In a letter to his son dated 31 January 1931, John Joyce asked James Joyce: “I wonder do you recollect the old days in Brighton Square, when you were Babie Tuckoo, and I used to take you out in the Square and tell you about the moo-cow that used to come down from the mountain and take little boys across?”

The Joyces lived in Brighton Square until 1884, when they moved to 23 Castlewood Avenue, Rathmines. Over a space of 22 years, James Joyce lived at no fewer than 19 different addresses in Dublin. The family was on the move endlessly, as John Joyce’s hopes and fortunes declined, each move bringing then down the social ladder another step. Most of those houses survive, though many of them – unlike 41 Brighton Square – are unmarked. 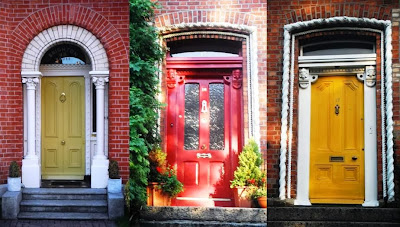 Front doors on Brighton Square ... notice the stucco faces on the frames of the two doors to the right (Photographs: Patrick Comerford, 2013)

As we strolled around the three sides of Brighton Square in the autumn afternoon sunshine, there was no sign of the scary “moo-cow” waiting “to come down from the mountain and take little boys across” to other side. But in that theme, many of the houses were already decorated for next week’s celebration of Hallowe’en [31 October], with pumpkins, masks, spider webs and danger signs.

One of the privileges of living on Brighton Square is the exclusive use of the park in the square, where John Joyce brought his children to play.

The park is managed by commissioners elected by the square’s resident, and its private grassed area, mature trees, pavilion and three tennis courts are enclosed by a picket fence and a low privet hedge that allow the outsider to put aside any feelings of exclusion. 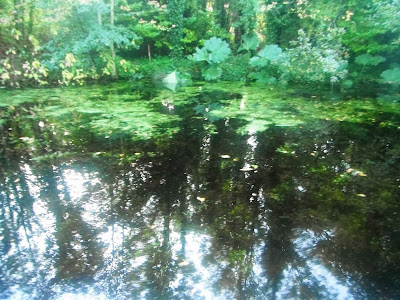 A walk by the pool in Bushy Park in the late autumn afternoon sunshine (Photograph: Patrick Comerford, 2013)

Later, we drove past the public house where James Joyce’s mother was born, and then along the road between Rathfarnham village and Bushy Park, where mist was rising from the road, the grass and the River Dodder below as the afternoon sun continued to burn off the surface water from the heavy rain storms of the last 24 hours.

We stopped briefly to walk by the riverbank, by the pool in the park and as far as the small waterfall that was once a feature of the Shaw estate attached to Bushy Park House.

The autumn leaves are falling now, but the reflections in water were clear, and the families of swans living here were still expecting to be fed by hand by people strolling through the park.

It was a beautiful start to the autumn bank holiday weekend. 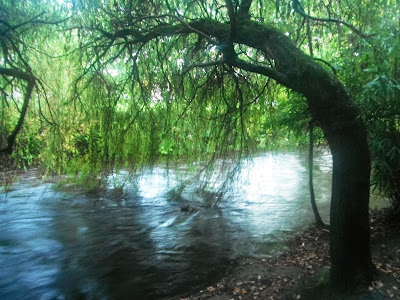 A willow by the River Dodder below Rathfarnham Village this afternoon (Photograph: Patrick Comerford, 2013)

Posted by Patrick Comerford at 20:24 No comments: