Croom Castle, Crom Abu,
and the debts that brought
down the Croker family 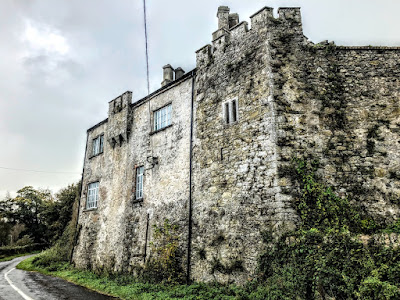 Croom Castle, Co Limerick … built by the FitzGeralds on the site of an earlier O’Donovan fortification (Photograph: Patrick Comerford, 2020)

During our visit to Croom, Co Limerick, earlier this week, two of us walked around the walls and ramparts of Croom Castle, standing above the bend on the River Maigue that gives Croom its name.

Croom Castle was once one of the principal residences of the Kildare branch of the FitzGerald dynasty. Their ancient rallying cry, ‘Crom a Boo,’ became the motto of the Earls of Kildare and the Dukes of Leinster. 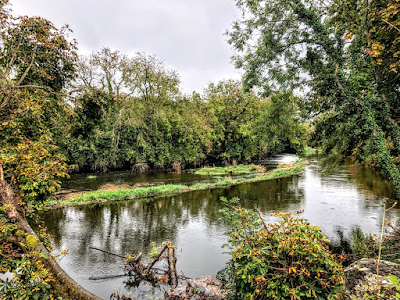 At the bend on the River Maigue, below the walls of Croom Castle (Photograph: Patrick Comerford, 2020)

Until the arrival of the Anglo-Normans, the territory around Croom was the domain of the ancient Uí Cairpre Áebda (Cairbre Eva), of whom the O’Donovans were the principal family. The Ui Chairpre were a member of the larger regional kingdom of the Uí Fidgenti, once squeezed between the rival Kingdom of Desmond to the south and Kingdom of Thomond to the north.

Uaithne mac Cathail), ancestor of the O’Donovans, is said to have lived in the Cromadgh or Croom area ca 960. The O’Donovans were associated with the Croom area in the 1130s, when they are mentioned in the Caithréim Chellacháin Chaisil.

Ruaidhri, son of Toirdhealbhach Ua Conchobhair, made a great predatory attack from Thomond in 1151, when he burned Cromadh and carried away many cows.

Some O’Donovans remained in the Croom area after the arrival of the Anglo-Normans and, according to Samuel Lewis in 1837, Dermot O’Donovan built the first-known castle at Croom sometime during the reign of King John or shortly before. 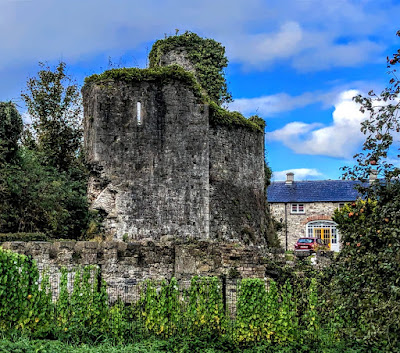 Croom Castle was besieged on at least three occasions during the reign of Elizabeth I (Photograph: Patrick Comerford, 2020)

According to Samuel Lewis, this early castle was built to secure the country that the O’Donovans had recently taken from the MacEnirys, their Ui Fidgheinte kinsmen.

It is believed that the tower castle was built in the early 13th century, following earlier attacks on the town.

During the reign of Elizabeth I, the FitzGeralds were besieged in Croom Castle on at least three occasions. The last of these sieges was in 1600, when Carew, the Lord President of Munster, led a force of 1,500 men in an attack on the castle. The castle garrison was commanded by Pierce Lacey,who made his escape at night under cover of darkness, and the castle surrendered the following morning.

Croom Castle and manor were restored to the FitzGerald family by James I, but they forfeited Croom once again during the wars of 1641. 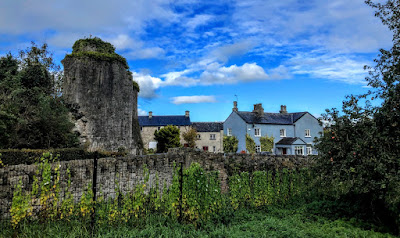 After the restoration, King Charles II granted Croom Castle in 1678 to his six-year-old illegitimate son, Charles Lennox (1672-1723), Duke of Richmond, who later lived in the castle for several years.

The castle was fortified against the Williamite force in 1691 by Jacobites who later took refuge in Limerick.

The Duke of Richmond sold Croom Caste to his agent, John Croker, in 1721. Later, a residence was built at Croom Castle with some of the stone and rubble from the old castle. 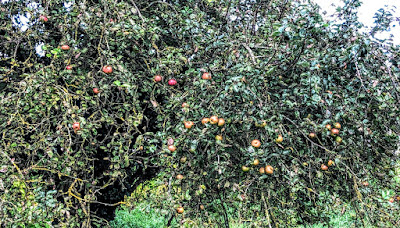 This attached two-storey house was built ca 1730, within the bawn of the mediaeval castle. It has rubble stone walls, square-headed windows with stone sills, and stone chimneystacks. The crenellations on the walls may date from the 19th century.

John Croker was the father of Captain Edward Croker married Lady Georgina Ellen Monck of Charleville House, Enniskerry, Co Wicklow, one of the 11 daughters of Henry Stanley Monck (1785-1848), Earl of Rathdown, in 1841. His father was disappointed that Edward was not marrying an heiress who might shore up the family fortunes; her father questioned Edward’s motives in marrying his daughter and was concerned about his mounting debts. 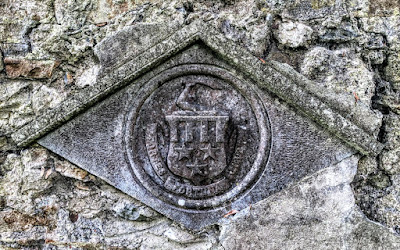 The Dickson coat-of-arms on the family vault in the Church of Ireland churchyard in Croom (Photograph: Patrick Comerford, 2020)

Edward Croker’s debts mounted up between 1849 and 1859, reaching close to £70,000, while the Croom Castle estate was valued at £2,158. By then the Dickson family were living at Croom Castle as agents and tenants of the Croker family. But the sale of Croom Castle was complicated and led to a lengthy legal dispute.

General Dickson married Harriet Dallas and they were the parents of two sons, Samuel Auchmuty Dickson (1817-1870), who lived at Croom Castle, Co Limerick and Major General William Thomas Dickson, 16th Lancers, and two daughters, Mary Eleanor who was disinherited when she became a Roman Catholic nun, and Fanny Charlotte, who married Mortimer Sackville-West (1820-1888), 1st Baron Sackville, in 1847. Her nephew was the father of the English novelist, poet, journalist, letter writer and diarist Vita Sackville-West (1892-1962).

Meanwhile, Croom Castle and its demesne were advertised for sale in February 1864. The Croker estate at Croom, including 450-500 acres, was sold for £8,000 in 1872. The Croker Estates Act 1888 was designed to settle many outstanding issues dating back to Edward Croker’s marriage settlement in 1841. 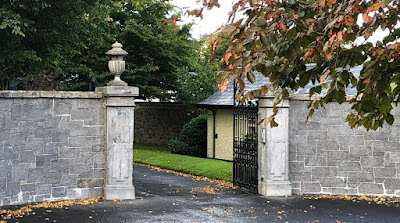 The gates of Croom House in Croom (Photograph: Patrick Comerford, 2020)

Croom Castle was bought by the Lyons family, descended from Denis Lyons (1749-1809) who in 1779 married Christian daughter of Thomas Casey, MP. The Lyons family were the owners of the mills in Croom and also lived at Croom House.

The descendants of Henry Lyons were still living in Croom in the mid-20th century.

The house at Croom Caste is of architectural importance as it remains relatively intact. It retains its archaeological significance as it was built within the bawn of the mediaeval castle. It was bought by Michael Corry in 1936, and more recently offered self-catering accommodation. 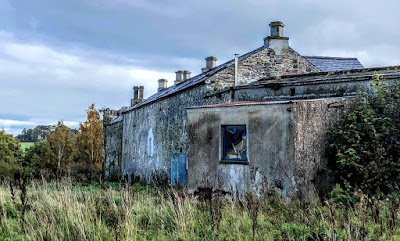 The house at Croom Caste is of architectural importance and remains relatively intact (Photograph: Patrick Comerford, 2020) 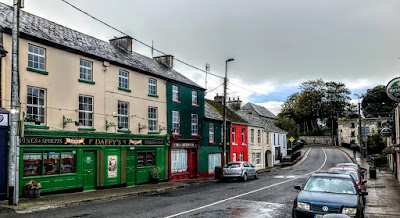 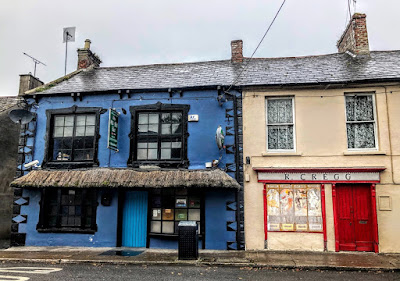 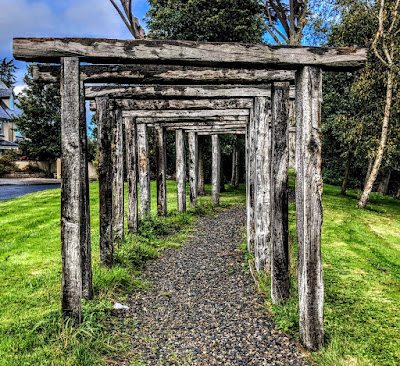 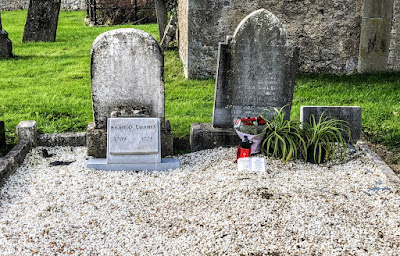 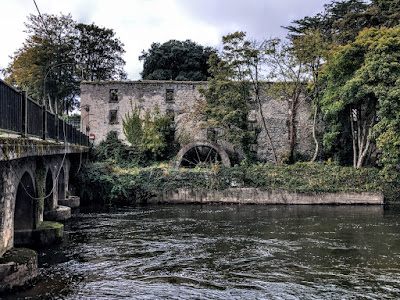