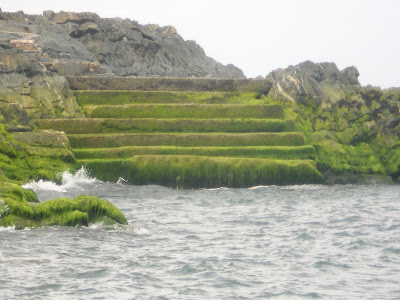 Scales on La Scala ... the steps at the north end of the beach in Greystones, Co Wicklow, this afternoon (Photograph: Patrick Comerford, 2012)

School’s out, the Tour de France has reached its final stages, it’s time for Test Cricket and Pimms ... but it just does not feel like high summer.

Why, the temperature never even reached 20 this afternoon.

Hay fever tells me this is summer; the grey skies and low temperatures make me wonder. But none of that was going to stop me going to the beach for a walk along the shore.

On the way out to Greystones, the Wicklow Mountains stood out in sharp relief, as though a child had drawn a line round them in pencil or cut them out with a scissors.

In Greystones, we stopped for late lunch and coffee at Insomnia, and sat outside, enjoying life ambling by. 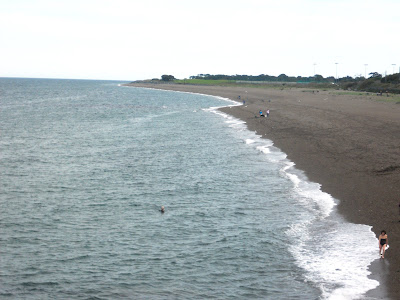 Just a few people braved the waters and the weather in Greystones this afternoon (Photograph: Patrick Comerford, 2012)

Down on the beach, a handful of Spanish students were enjoying the afternoon – they must think the rain in Ireland is just plain awful. A happy dog, a small child, and three brave adults tried swimming, but no-one, apart from the dog, seemed to stay in the water for very long. 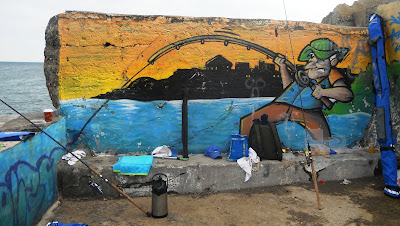 Gone fishing ... the only blue this afternoon seemed to be in the wall paintings (Photograph Patrick Comerford, 2012)

But it was soothing to watch the waves crush softly against the pebbles and to listen to the gentle rolling sound of the water.

The walk was soothing too for the cough that my sarcoidosis has been inflicting on my chest for the last week or two.

Hopefully the promise of warmer sunshine next week comes true. 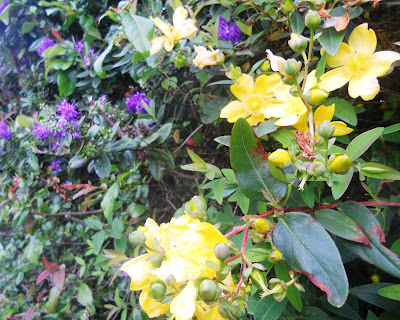 A promise of summer? Flowers in Greystones this afternoon (Photograph: Patrick Comerford, 2012)