Signs of the times on the old
houses in Portugal Place 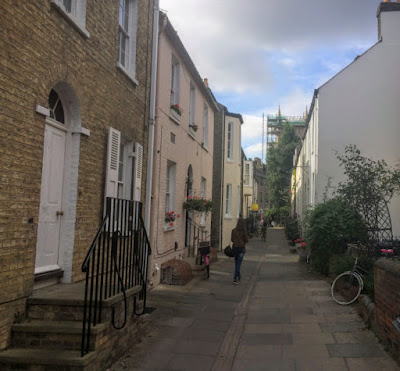 Portugal Place is a much photographed street in Cambridge and it features in many guide books and on postcards and calendar. For people who know Cambridge, this is a popular link between the heart of the city and Jesus Green and beyond. Yet many visitors pass it by on their way from the centre of Cambridge to the punts for hire at Magdalene Bridge.

The short, narrow street runs east from Bridge Street to Portugal Street and on to Jesus Green and the River Cam, and faces back towards the chapel of Saint John’s College at the east end. It is just a two-minute walk from Sidney Sussex College, and I walked along it many times this week during breaks at the summer conference organised by the Institute for Orthodox Christian Studies.

I decided to walk back along Portugal Place after a morning walk along the River Cam and by the boat clubs yesterday [1 September 2016] before I left Cambridge this week following the summer conference in Sidney Sussex College organised by the Institute for Orthodox Christian Studies. 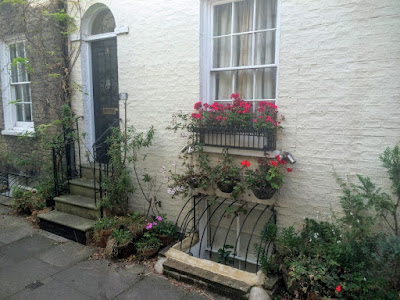 Portugal Place is a narrow, picturesque street and is fully pedestrianised. It has been described as ‘an attractive antidote to the adjoining commercial streets.’ It consists mainly of residential properties, although there are some low-key commercial and retail units.

It is said that some of the most interesting and most colourful characters in Cambridge have lived here in houses that date mainly from the 18th and 19th century. More recently, No 19 was the home of Francis Crick (1916-2004), the molecular biologist, biophysicist, and neuroscientist, most noted for being a co-discoverer of the structure of the DNA molecule in 1953 with James Watson.

However, there is no independent evidence that the church predates the Norman conquest, and most of the street is much later in date, with gradual extensions northwards in the 17th, 18th and 19th centuries. 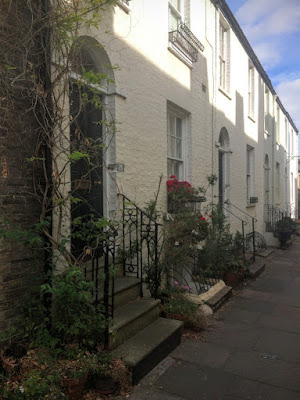 Most of the properties on Portugal Place are set on the edge of the footpath (Photograph: Patrick Comerford, 2016)

Most of the properties on Portugal Place are set on the edge of the footpath, and there is a feeling of a small square at a kink in the lane just east of the church. The south-west vista is closed by North Court with views of the chapel beyond at Saint John’s College.

To the north-east, the vista is blinkered and leads to Portugal Street and Jesus Green and beyond. Nearby is a multi-storey car park, but the tall holly tree in Saint Clement’s churchyard adds some greenery at the west end of Portugal Place.

The iron railings and balustrades in front of the houses are a key feature, and the variety of roof heights and chimneys provide the skyline with some interesting and eye-catching details. Street lighting is provided by reproduction heritage columns.

A recent report recommended repaving throughout in York stone and repairing the railings would improve the street scene, and suggested that interest could be added to the street by providing details of some of the former residents.

A sign at No 17, one of the pretty houses ‘Allama Muhammad Iqbal, Born 1877 Died 1938 Poet-Philosopher of Pakistan lived here 1905-6 while at Trinity College.’ It is an interesting anachronism, for although he is often described as t‘ Spiritual father of Pakistan,’ the state of Pakistan was not formed or delineated for more than a decade after his death. 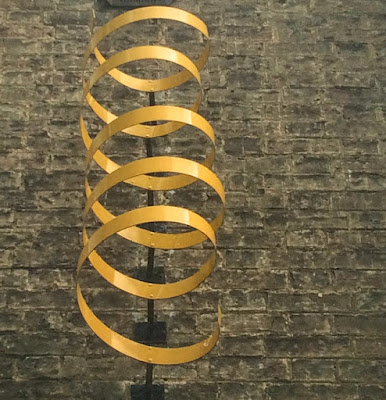 This narrow street turns right at this point, and No 18 is the Hawks Club. Next door, Nos 19 and 20 share a number plate and an eye-catching sculpture above the doors is a representation of the Double Helix, a reminder without any accompanying words that Crick once lived here.

However, like most people, I imagine, I more inclined to associate Crick, James Watson and the Double Helix with the Eagle in Bene’t Street. 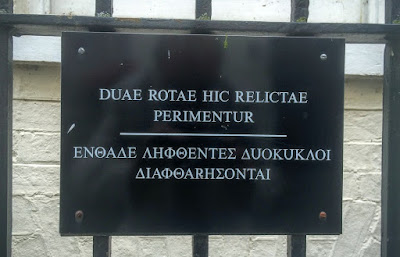 A sign at No 12 Portugal Place makes errors in not just one but two classical languages (Photograph: Patrick Comerford, 2016)

Whatever about the potential of more signs like this, a sign placed on railings on No 12 Portugal Place last year upset many classicists in Cambridge. Reports said the owners of the building were so perturbed by the number of bicycles left chained to the railings by students that they erected this angry sign in both classical Greek and Latin.

The notice is intended to warn cyclists that all bicycles will be ‘removed or destroyed.’ However, it seems the sign-writer might have benefitted from some further tutoring. Despite appearing to be the work of a well-educated person, critics quickly pointed out that the wording includes a number of mistakes.

‘It’s definitely trying to be ancient Greek but it’s not quite,’ he said, the BBC quoted him as saying. He said both lines of the Greek inscription use the wrong letters. ‘I don’t know what to make of it really, but it’s very amusing and it’s absolutely great to see this in the city.’

Professor Mary Beard of Newnham College, a leading Cambridge and international classicist, said the Latin – Duae rotae hic relictae perimentur – may be correct, but she pointed out that it translates literally as ‘two wheels left abandoned here will be removed.’

Students were critical too and said the sign for being pompous, elitist and patronising. All this week, I noticed a bicycle chained to the railings in defiance – or in ignorance – of the intended meaning of the sign. 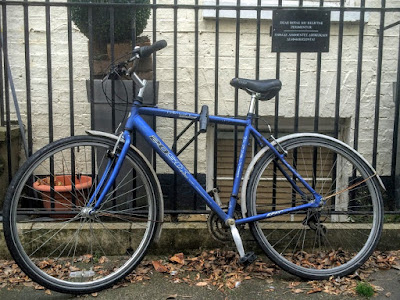 A chained bicycle that defies the sign on the railings at No No 12 Portugal Place (Photograph: Patrick Comerford, 2016)

Others might have pointed out that Greek speakers were available in plentiful supply: Saint Clement’s hosted the Greek Orthodox parish for many years, or that Sidney Sussex College, the annual venue for the summer school of the Institute for Orthodox Christian Studies, is just two or three minutes walking distance.