‘The sea, the sea’ … a bracing
walk along the seafront in Bray 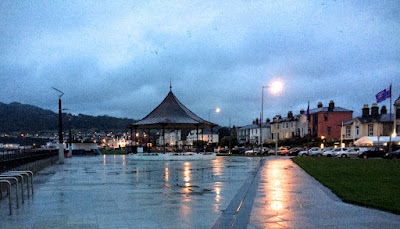 Evening lights on the Promenade and a rainy seafront in Bray (Photograph: Patrick Comerford, 2015)

The water and the sea are not being very kind to the people of Ireland these days, it may seem. Houses, shops, farms and whole towns are beneath water all along the Shannon Basin, and the sea has battered most of the west and south coasts for days on end.

But the sea is not always cruel. According to Xenophon, in his Anabasis (Ἀνάβασις, The Inland Expedition), “The Sea! The Sea!” (θάλαττα θάλαττα, Thalatta! Thalatta!) is the shout of exultation from the roaming 10,000 Greek mercenaries when they catch sight of the Black Sea from Mount Theches in Trebizond and realise they are saved from death.

Their joyful cry is one of the best-known quotations from ancient Greek literature, alongside Homer’s description of the sea in the Odyssey as ἐπὶ οἴνοπα πόντον, meaning “wine-red,” “wine-faced,” “wine-dark,” or “wine-coloured.”

James Joyce cites both references in the opening chapter of Ulysses, when Buck Mulligan looks out from the parapet of the Martello Tower in Sandycove and asks Stephen Dedalus rhetorically: “Isn’t the sea what Algy calls it: a great sweet mother? The snotgreen sea. The scrotumtightening sea. Epi oinopa ponton. Ah, Dedalus, the Greeks! I must teach you. You must read them in the original. Thalatta! Thalatta! She is our great sweet mother. Come and look.”

Of course, Joyce is undermining Mulligan’s scholarship in this passage. The phrase ἐπὶ οἴνοπα πόντον (epi oinopa ponton) occurs several times in the Odyssey. By putting these words into Mulligan’s mouth, Joyce is doing Mulligan’s scholarship no favour. The Classical Greek Mulligan would have learned at Oxford was not pronounced according to the reconstructed pronunciation of Ancient Greek, and the Classical Association, which promoted the introduction of a more authentic pronunciation, was only founded in 1903. So Mulligan has almost as little experience of the Greeks in the original as Stephen. 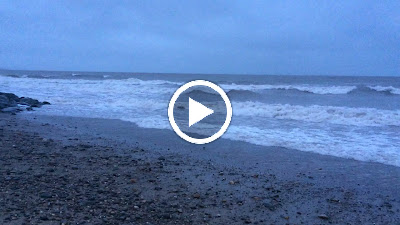 Xenophon’s phrase also inspired Louis MacNeice’s poem, Thalassa, in which life is seen as a perilous voyage in an open boat, amidst looming waves, in an icy sea, beneath a tilting sky:

Run out the boat, my broken comrades;
Let the old seaweed crack, the surge
Burgeon oblivious of the last
Embarkation of feckless men,
Let every adverse force converge –
Here we must needs embark again.

Run up the sail, my heartsick comrades;
Let each horizon tilt and lurch –
You know the worst: your wills are fickle,
Your values blurred, your hearts impure
And your past life a ruined church –
But let your poison be your cure.

Put out to sea, ignoble comrades,
Whose record shall be noble yet;
Butting through scarps of moving marble
The narwhal dares us to be free;
By a high star our course is set,
Our end is Life. Put out to sea.

This poem was found in Louis MacNeice’s papers after he died in 1963, although the date it was written is not known.

Xenophon’s phrase also inspired the title of The Sea, the Sea, a novel by the Irish-born writer Iris Murdoch, and it won the Booker Prize in 1978. It tells the story of the strange obsessions that haunt a self-satisfied playwright and director as he begins to write his memoirs.

I went out to see the raging sea in Bray this afternoon just as it was getting dark. Perhaps Joyce was inspired by views such as this for he lived by the sea at Bray, at No 1 Martello Terrace, overlooking the Promenade and the Sea Front, from 1887 and 1891.

The Joyces moved to No 1 Martello Terrace in May 1887. Stanislaus Joyce claimed that his father had moved from Dublin to Bray to get away from his in-laws who could be relied on not to pay the train fare to Bray to visit them. John Joyce took up his sporting life again, rowing and going fishing with his neighbour, the chemist James Vance, and fishermen from Bray, all accompanied by the usual drinking.

James Joyce sang with his parents in a fundraising concert for Bray Boat Club on 26 June 1888. Joyce was just six years old, and two months away from starting as a boarder at Clongowes Wood College in Co Kildare.

According to the programme, ‘Master Joyce’ sang ‘Houlihan’s Cake’ towards the end of the first half of the programme. John Joyce sang ‘My Sweetheart when a Boy’ by Reginald Morgan, and Mrs Joyce and Mrs Vance sang the duet ‘The Fisher’s Evening Song’ by Friedrich Kücken.

https://photos.google.com/photo/AF1QipNVIGjzOZ8F0ApNqCrayFQw-PVJDtIhEjTsVSI8 As dark enfolded the seafront in Bray this evening, the waves were churning up and bashing against the pebble shore. One lone surfer seemed to be foolish rather than brave as he held onto his board against the incoming tide.

Along the promenade, the paths were filled with water that reflecting the dim lights above, and only handful of people had braced themselves for the brisk walk.

Eventually, I retreated to Carpe Diem on Albert Avenue for a hearty albeit late lunch, accompanied by a glass of San Rocco and a stiff double espresso.

A glass of San Rocco during a late lunch in Carpe Diem (Photograph: Patrick Comerford, 2015)

Posted by Patrick Comerford at 19:26 No comments:

Waiting in Advent 2015 with
Dietrich Bonhoeffer (14) 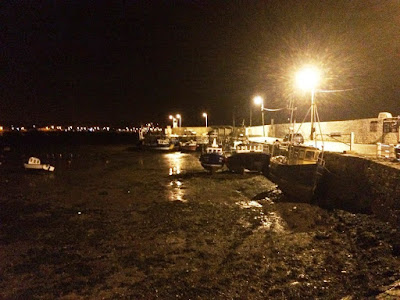 ‘God is in the manger, wealth in poverty, light in darkness’ … light and darkness on a winter’s evening in Skerries Harbour (Photograph: Patrick Comerford, 2015)

We have come to the end of the second week of Advent, tomorrow [13 December 2015] is the Third Sunday of Advent, and there are less than two weeks to go to Christmas Day. Throughout this Advent, as we wait and prepare for Christmas, I am inviting you to join me each morning for a few, brief moments in reflecting on the meaning of Advent through the words of the great German theologian and martyr, Dietrich Bonhoeffer (1906-1945).

In a letter to his 19-year-old fiancée Maria von Wedemeyer while he was in prison, separated from her and facing darkness, sorrow and uncertainty, Bonhoeffer wrote:

“… And then, just when everything is bearing down on us to such an extent that we can scarcely withstand it, the Christmas message comes to tell us that all our ideas are wrong, and that what we take to be evil and dark is really good and light because it comes from God. Our eyes are at fault, that is all. God is in the manger, wealth in poverty, light in darkness, succour in abandonment. No evil can befall us; whatever men may do to us, they cannot but serve the God who is secretly revealed as love and rules the world and our lives.”