This weekend’s return visit to Achill Island at the invitation of the Heinrich Boll Memorial Weekend allowed plenty of opportunities to meet old friends, and for walks on the beautiful, long sandy beaches of Achill, including, of course Dugort and Keel.

I had one long, last walk on the beach in Dugort before leaving the island … although I am sure I shall back again soon.

On the way back to Dublin, we stopped 3 km outside Newport for my first-ever visit to the ruins of Burrishoole Friary, beside a quiet tidal estuary on a remote stretch of the Mayo coastline.

I have often seen the signposts for Burrishole and had intended to take a detour to visit the friary and coastline here, but I seemed to miss the opportunity on every occasion.

The first recorded clergyman in Achill in modern times was not the Revd Edward Nangle, who was the subject of so many papers this weekend, but the Revd John Horsley Beresford. He was ordained deacon and priest in 1803 by Bishop William Bennett of Cloyne and was soon after appointed Vicar of Burrishoole, Kilmeena and Achill by his father William Beresford, Archbishop of Tuam and first Lord Decies.

The quiet shoreline at estuary below the in ruins of Burrishoole Friary (Photograph: Patrick Comerford, 2015)

Back in the mists of time, Richard ‘fitzThomas’ Comerford (1564-1637), who inherited Ballybur Castle at the age of 24, was involved in securing the title of the Earls of Ormond to large tracts of land in Co Mayo, including Achill Island and Burrishoole, under Butler family claims that dated back to at least 1281.

Richard was a contemporary and kinsman of Justice Garret Comerford (ca 1558-1604), a judge and politician, who was sent by Lord Ormond to Mayo to report on the wreckages of the Spanish Armada. These included the Rata Encoronada, which was wrecked near Ballycroy, and the Gran Grin, wrecked at Burrishoole in Clew Bay.

The Gran Grin was wrecked in Clew Bay, at “Borreis … which place belongs to the Earl of Ormond.” This was Borris or Burris, a townland with western borders fronting onto the sea at Clew Bay. The name lives on in the smaller and more southerly area now defined as Burrishoole, but in the 16th century it applied to a much wider area.

Achill Island and the Barony of Owle were claimed by the Ormond Butlers. Those claims dated from 1238, and although the territory passed to the de Burgo family in the late 14th or early 15th century, the Butler claims were reasserted by Black Tom. 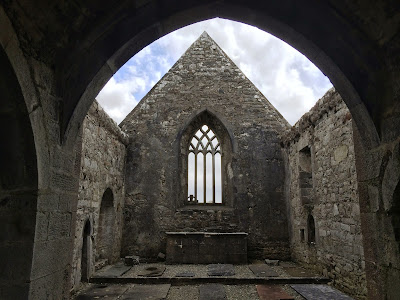 Inside the ruins of Burrishoole Friary, near Newport (Photograph: Patrick Comerford, 2015)

The friary at Burrishoole, which I visited this afternoon, was founded by Sir Richard de Burgo of Turlough for the Dominican order in 1469. He was Lord Mac William Oughter and the Chief of the Burkes of Turlough and is known in Irish as Risteard an Cuarscidh, or Richard of the Curved Shield.

At the foundation of the friary, de Burgo resigned his lordship and entered the friary, where he remained a friar until his death four years later.

Meanwhile, the friary had been built without the permission of the Pope, and it was not until 1486 that Pope Innocent VII instructed the Archbishop of Tuam to forgive the friars and pardoned all those that began building before receiving his approval. Although it is known locally as Burrishoole Abbey, the name is inaccurate as the Dominican order did not have abbots, and the foundation was a friary rather than an abbey. 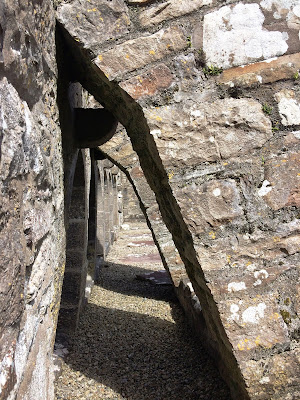 The friary flourished in the century that followed, with friars taking on the roles of pastors, physicians and hospitallers for the surrounding parish. The abbey had a troubled history, and the Dominican friars were repeatedly expelled although they returned time and time again, even after the Dissolution of the Monastic Houses at the Reformation.

Richard de Burgo, the founder of the friary, was an ancestor of Risteárd an Iarainn (‘Iron Richard’) Bourke, the second husband of Granuaile, who owned nearby Rockfleet Castle. Their son Tiobaid na Loinge is buried at Ballintubber Abbey, while their daughter, Honoria de Burgo (Nora Burke), joined the Third Oorder of Saint Dominic in the order of Saint Catherine of Siena from Father Thaddeus Ó Duanne when she was only 14 in 1563.

Although her parents were powerful and wealthy figures in the area, she withdrew from world concerns and built a small convent close to the abbey where she lived with her fellow sisters.

Around 1580, when a band of soldiers arrived at her convent, she fled to the mountains in search of sanctuary, and later returned to her convent.

Later, in 1652, it is said, the abbey was attacked and plundered by Cromwellian troops. They brutally treated two nuns, Sister Honoria Bourke, who was still alive, and Sister Honoria Magaen. The two nuns, now over 100 years old, fled to Saint’s Island in nearby Lough Furnace. They were later captured, stripped naked, their ribs broken and were left to die in the bleak mid-February. Sister Honoria sought refuge in the hollow of a tree, but was found dead the following day. The sisters were buried together.

Peregrine O Cleirigh, one of the Four Masters, is also buried in the abbey. He said in his will, dated February 1664: “I bequeath my soul to God and I charge my body to be buried in the monastery of Burgheis Umhaill.”

The abbey fell into ruins in the 18th century, and the collapse of its roof in 1793 hastened its demise. 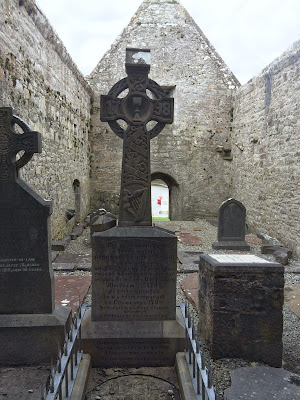 Father Manus Sweeney, who is buried within the friary church, was a local priest who was hanged on the market crane in Newport in 1799 for his he part in the 1798 Rising.

He was a contemporary of Father John MacDonnell, the last prior (1798-1800). Local lore tells of friar named Horan who continued to live near the friary in the early 19th century. The last friar to take the habit for Burrishoole was John Hughes from Co Galway who became a Dominican friar in 1862 at Esker, Co Monaghan.

Today, the nave, chancel, tower and south transept of the friary church remain, and there are ruins of domestic buildings and a cloister to the north. 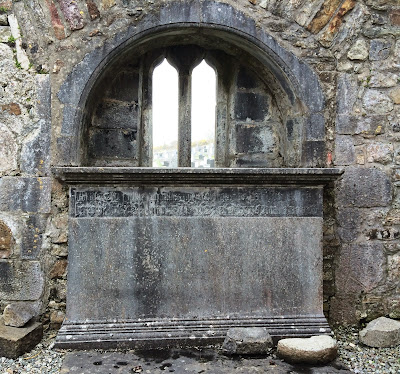 The O’Kelly tomb, dating from 1623, inside the ruins of Burrishoole Friary (Photograph: Patrick Comerford, 2015)

The oldest inscribed tomb in the friary is the O’Kelly altar tomb in the south transept, with a Latin inscription dated 1623.

The friary is a National Monument and the grounds are used as a local cemetery.

From Newport, we drove on to Castlebar, and through Turlough, the ancestral home of the de Burgo family who founded Burrishoole. We diverted to visit Foxford, where we had lunch at the Foxford Woollen Mills

It was late in the evening when we arrived back in Dublin, cherishing memories of another beautiful weekend on Achill Island and in Co Mayo.

Posted by Patrick Comerford at 23:07 2 comments: