Saint Luke’s Chapel, part of the Radcliffe Observatory Quarter, was once the church attached to the Radcliffe Hospital (Photograph: Patrick Comerford, 2022)

I was in Oxford yesterday for a lunch with a long-standing friend from Pakistan who is in England working on her PhD at the Oxford Centre for Mission Studies.

The chapel is now deconsecrated, but it has been beautifully restored to showcase its pre-Raphaelite stained glass windows and vaulted ceiling.

Saint Luke’s was built in the Early English Gothic style and is named after Saint Luke, the gospel writer and the patron saint of physicians.

The large, rectangular interior of the chapel is now a flexible event space with a capacity of up to 80 people in theatre style layout. It is also a venue space for private dining, live theatre and recordings. The range of bookings including meetings, dinners, drinks receptions and talks. However, it is only available to hire to people who have associations with the University of Oxford.

The carving over the south porch in Saint Luke’s Chapel (Photograph: Patrick Comerford, 2022)

The chapel was designed by the architect Sir Arthur William Blomfield (1829-1899), a son of Charles James Blomfield, Bishop of London, and was consecrated on 7 June 1865.

Saint Luke’s is built of coursed rubble, with stone tracery and a red tile steeply pitched roof with a bell turret. It was connected to the Radcliffe Infirmary by a pitched-roof, four-bay corridor, and formed one side of the courtyard in front of the Infirmary.

It was designed on a rectangular plan of five bays and chancel. The transept porch on the south wall is under bellcote. It was connected to main hospital block by a four-bay corridor.

Inside the chapel, the bays are marked by wood trusses with cusped underside. Each bay has a window with pair of narrow cusped lancets surmounted by pointed trefoils and quatrefoils with carved hood stops. The East Window has three stepped lancets and is framed by tall colonnettes with small capitals supporting thin roll mouldings and with foliate roundels in the spandrels.

The glass originally depicted nine miracles of healing and the Resurrection, and may have been designed by Henry Holiday (1839-1927).

The chapel is now a Grade II listed building, standing in the Radcliffe Observatory Quarter (ROQ), a major development project by the University of Oxford in the estate of the old Radcliffe Infirmary hospital site.

The site covers 10 acres (3.7 hectares) is in central north Oxford, and is bounded by Observatory Street and Green Templeton College to the north, Woodstock Road to the east, Somerville College to the south, and Walton Street to the west.

The project and the area are named after the Radcliffe Observatory, now the centrepiece of Green Templeton College, which is intended to form the visual centrepiece of the project.

Radcliffe Observatory was founded and named after John Radcliffe by the Radcliffe Trustees. It was built on the suggestion of the astronomer Thomas Hornsby, who was the Savilian Professor of Astronomy, following his observation of the notable transit of Venus across the sun’s disc in 1769 from a room in the nearby Radcliffe Infirmary.

The observatory building was initially designed by Henry Keene in 1772, and was completed in 1794 by James Wyatt. Its prominent octagonal tower based on the Tower of the Winds in Athens. The tower is topped with a statue by John Bacon of Atlas holding up the World.

The Savilian Professor of Astronomy was responsible for the observatory until 1839. The appointment that year of George Henry Sacheverell Johnson, an astronomer with no observational experience, caused the creation of the new role of Radcliffe Observer.

Radcliffe Observatory was the astronomical observatory of the University of Oxford from 1773 until 1934, when the Radcliffe Trustees sold it. Because of viewing conditions, weather, urban development and light pollution at Oxford, the observatory moved to South Africa.

Today, the observatory is the centrepiece of Green Templeton College. The original instruments are now in the Museum of the History of Science, Oxford, except for the Radcliffe 18/24-inch Twin Refractor telescope, which was transferred to the University of London Observatory.

Green Templeton College is the university’s second newest graduate college, after Reuben College, and was founded by the merger of Green College and Templeton College in 2008. The college specialises in subjects relating to human welfare and social, economic and environmental well-being, including medical and health sciences, management and business, and most social sciences.

Green Templeton College is one of the newest graduate colleges in the University of Oxford (Photograph: Patrick Comerford, 2022)

Praying for World Peace and with USPG:
Wednesday 19 October 2022

‘I was ill and you visited me,’ a sculpture by Timothy Schmalz on the steps of Santo Spirito Hospital near the Vatican, in Rome … the Week of Prayer for World Peace invites prayers today on the theme of ‘Poverty’ (Photograph: Patrick Comerford)

The Calendar of the Church of England in Common Worship today (19 October) recalls Henry Martyn, Translator of the Scriptures, Missionary in India and Persia, 1812, with a Lesser Festival.

Later today, I have a meeting in the offices of the Anglican mission agency USPG (United Society Partners in the Gospel) in London. But, before today gets busy, I am taking some time this morning for reading, prayer and reflection.

This year, the Week of Prayer for World Peace is from 16 to 23 October. In my prayer diary from last Sunday until next Sunday, I am reflecting in these ways:

2, A reflection from the programme for the Week of Prayer for World Peace (16 to 23 October); 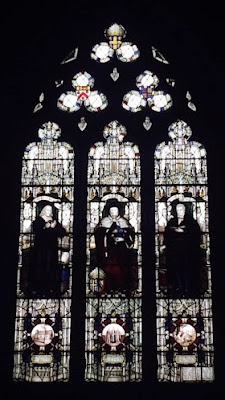 Henry Martyn (1781-1812) was born in Truro and studied at Saint John’s College, Cambridge, from the age of 16. He became an avowed evangelical and his friendship with Charles Simeon led to his interest in missionary work. In 1805, he left for Calcutta as a chaplain to the East India Company. The expectation was that he would minister to the British expatriate community, not to the indigenous peoples; in fact, there was a constant fear of insurrection and even the recitation of Magnificat at Evensong was forbidden, lest ‘putting down the mighty from their seat’ should incite the natives. Henry Martyn set about learning the local languages and then supervised the translation of the New Testament first into Hindustani and then into Persian and Arabic, as well as preaching and teaching in mission schools. He went to Persia to continue the work but, suffering from tuberculosis, he died in Armenia on this day in 1812.

[Jesus said:] 39 ‘But know this: if the owner of the house had known at what hour the thief was coming, he would not have let his house be broken into. 40 You also must be ready, for the Son of Man is coming at an unexpected hour.’ 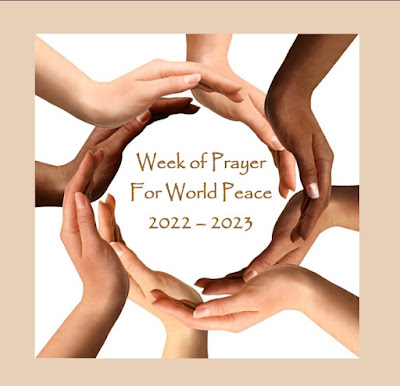 The week of Prayer for World Peace takes place from the second to third Sunday in October each year, which this year is from Sunday last (Sunday 16 October 2022) to next Sunday (23 October 2022).

The Week of Prayer for World Peace is supported by a wide range of organisations, many of which I have engaged with over the years, including the Anglican Pacifist Fellowship, Christian CND, the Fellowship of Reconciliation, Pax Christi, and Quaker Peace and Social Witness.

We remember all those who live in poverty partly because of the resources spent on war.

‘To humble beings, immersed in suffering without respite,
all harried by terrible and endless karma,
unbearable disease, fighting, starvation and all manner of dangers: let an ocean of happiness and peace arise.’ – Dalai Lama

‘The bird that has eaten cannot fly with the bird that is hungry.’ – North American – Omaha

‘Christ the Beggar’, a sculpture by Timothy Schmalz on the steps of Santo Spirito Hospital near the Vatican … the Week of Prayer for World Peace invites prayers today on the theme of ‘A Prayer for the Earth’ (Photograph: Patrick Comerford)

Almighty God,
who by your Holy Spirit gave Henry Martyn
a longing to tell the good news of Christ
and skill to translate the Scriptures:
by the same Spirit give us grace to offer you our gifts,
wherever you may lead, at whatever the cost;
through Jesus Christ your Son our Lord,
who is alive and reigns with you,
in the unity of the Holy Spirit,
one God, now and for ever.

Holy Father,
who gathered us here around the table of your Son
to share this meal with the whole household of God:
in that new world where you reveal
the fullness of your peace,
gather people of every race and language
to share with Henry Martyn and all your saints
in the eternal banquet of Jesus Christ our Lord.

The theme in the USPG Prayer Diary this week is ‘World Food Day.’ This theme was introduced on Sunday.

Let us pray for the Food and Nutrition programme run by the Anglican Council of Malawi. May the programme be successful in its aims to train farmers and provide them with much-needed equipment. 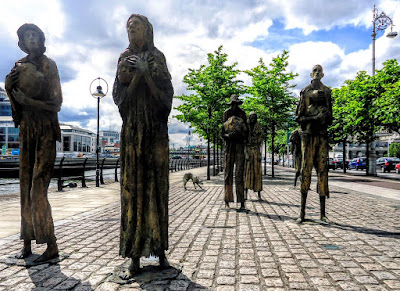 ‘We remember all those who live in poverty partly because of the resources spent on war’ … the Famine Memorial by the sculptor Rowan Gillespie on Custom House Quay, Dublin (Photograph: Patrick Comerford)

The Unjust Steward … part of the East Window in Saint Michael’s Church, Limerick, made in 1878 by Mayer & Co and illustrating the parables (Photograph: Patrick Comerford)