Back in Thessaloniki once again

Thessaloniki: the Paralia or seafront promenade is lined with cafés and shops

I am back in Thessaloniki after a gap of seven years. I arrived late this afternoon after a short stopover in the Hungarian capital, Budapest, on a Malev flight from Dublin.

I am staying in the heart of the city at the Egnatia Hotel on Antigonidon Street, off Egnatia Avenue, the busiest main street in central Thessaloniki and within a 10-minute walk of the city’s, restaurants, shops and nightlife. The hotel is close to the Roman agora and the main historical sites, and just minutes from the Paralia or seafront promenade, which is lined with cafés and shops,and the Thermaikos Gulf. Nearby are old Byzantine churches and monuments, reflecting the 2,500 years of history that have shaped and made Thessaloniki. 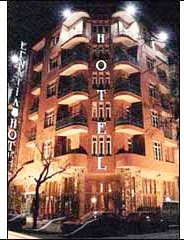 The Egnatia Hotel... within walking distance of the main historical and archaeological sites in Thessaloniki

I was last in this beautiful city in 2004 when I was visiting Mount Athos. But I have been here many times before, passing through to or from Athens or especially in 1997 when the Ecumenical Patriarch visited and delivered a lecture in the Aristotelian University, and when Thessaloniki was the European Capital of Culture. I have written travel reports on Thessaloniki, book and exhibition reviews, and features on its Byzantine and Jewish heritage.

Local lore says Thessaloniki was founded about 315 BC, on the site of old prehistoric settlements dating back to 2300 BC, by Cassander, King of Macedonia, who named the city after his wife, Thessaloniki, the sister of Alexander The Great.

Since then, Thessaloniki has become the principal city of Macedonia and its most important commercial port. In Roman times, it was visited by the Apostle Paul, who preached here and who addressed two epistles (I Thessalonians and II Thessalonians) to Christians in Thessaloniki.

This time I am visiting Thessaloniki to retrace the footsteps of my grandfather, Stephen Edward Comerford, who died on 21 January 1921, in hospital, suffering the terrible consequences of the malaria he had picked up in Thessaloniki at the height of World War I. He had been shipped to the Balkans in 1915 along with thousands of other men from the Royal Dublin Fusiliers.

After taking part in the wars and the battles in the Balkans, he was struck down with malaria. He was shipped back to Ireland from Thessaloniki and was discharged on 3 May 1916, only three days after the Easter Rising ended in Dublin. Malaria saved him from further action in World War I and probably saved his life, albeit briefly. His early homecoming was fortuitous for the Comerford family and for me … otherwise, my father would never have been born.

It is coincidental then that Thessaloniki has long been one of my favourite Greek cities. Like Milan, Cork, Kyoto, and many other cities, this city exudes the casual but elegant confidence associated with second cities. It is a pleasant, relaxed but cultured city, with fine museums, universities and a rich architectural and historical heritage, and I am looking forward to a pleasant reacquaintance with this city over the next few days.
Posted by Patrick Comerford at 18:00 No comments: