‘The Doors! The Doors! In wisdom, let us attend!’ 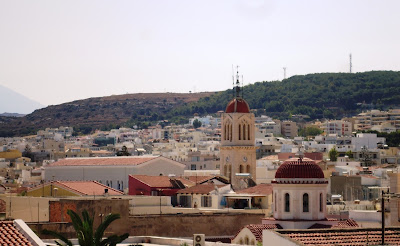 Looking across the roofs of Rethymnon from the terrace above the Centre for Byzantine Art (Photograph: Patrick Comerford, 2013)

The terrace café on the rooftop of the restored Venetian mansion that houses the Centre for Byzantine Art on Ethinikis Antistasros Street offers panoramic views across the rooftops and narrow streets of the old town of Rethymnon, with the dome on the top of the Fortezza hill to the north and the mountains of Crete to the south. The scene is punctuated here and there by minarets of old former mosques and the domes and rowers and turrets of more modern churches.

It was my last day in Rethymnon on Friday [6 September 7, 2013], and I spent a few hours in the morning strolling through these same narrow streets, enjoying the town’s amazing collection of doors and doorways from the centuries of Venetian and Ottoman rule. 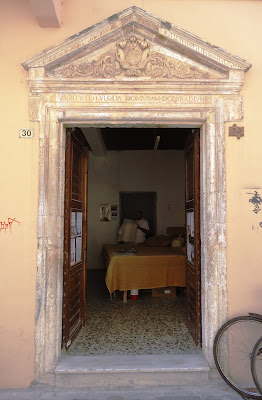 I wrote last year about the doors of Rethymnon, with their rich variety of style and sad state of neglect and decay that threatens many of them.

The Venetian doorframe at No 30 Vernardou Street is one of the richest in Rethymnon, with a Latin inscription: Virtutue fulcida domus MCCIX Kal Iunii, “Virtue illuminates the house, Calends of June 1609.” The doorway also displays the coat of arms of the Clodio family, one of the leading Venetian families in Rethymnon. 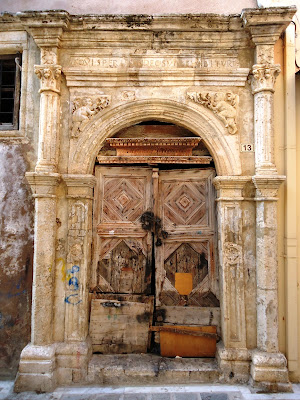 But another door with a Latin inscription that I missed last year is at No 13 Klidis Street. The door is framed with Corinthian columns, and in the triangular spaces beside the pediment, there is a pair of putti or chubby little child-like angels chasing birds.

The Latin inscription in the crown of the doorway above reads: Qui sperat in Deo sublevabitur, “Whoever trusts in God is secure.” The full Biblical quotation is: “The fear of others lays a snare, but one who trusts in the Lord is secure” (Proverbs 29: 25). 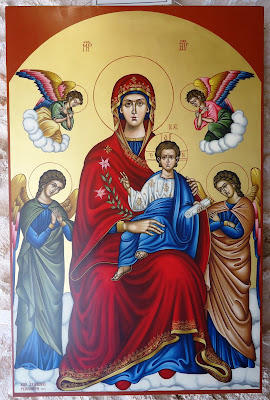 An icon by Alexandra Kaouki in the recent exhibition in the Fortezza (Photograph: Patrick Comerford, 2013)

Beneath the Fortezza, in Melissinou Street, I visited the icon workshop of Alexandra Kaouki, who also exhibited three of her icons in the Icon Painting Exhibition which I visited last Saturday and which was part of this year’s Renaissance Festival in Rethymon. 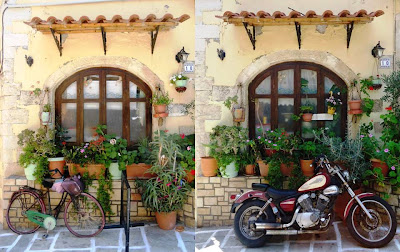 Time moves on at Marylee’s House beneath the Fortezza (Photographs: Patrick Comerford, 2012 left and 2013 right)

Beneath the Fortezza, I came across a house which had provided one of my favourite photographs last year, with its colourful façade, flowerpots and window and a punctured bicycle outside.

Yesterday, the bicycle that had been outside Marylee’s house last year had given way to a motorbike. I suppose time just moves on at a speed we never understand. 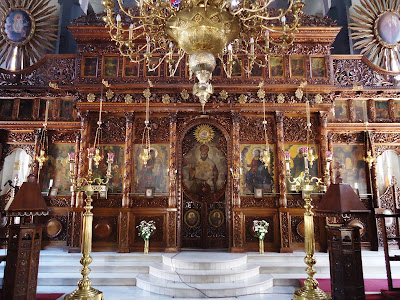 ‘The Doors! The Doors! In wisdom, let us attend!’ … the icon screen in the Cathedral in Rethymnon (Photograph: Patrick Comerford, 2013)

At the Divine Liturgy in the Orthodox Church, the Symbol of Faith or the Creed is traditionally introduced with the exclamation: “The Doors! The Doors! In wisdom, let us attend!”

However, the doors referred to here are the doors of the church building, and not the doors of the iconostasis as many think. This is a call to ensure that all catechumens and non-communicants have left, and that no-one enters or leave the liturgical assembly. The historical liturgical expectation was that the Creed would be said only by those who had already officially pronounced it at baptism, and continued to confess it within the life of the Church.

Of course, visitors are now allowed to remain in church and, because the bread and wine of the liturgy have been brought though the doors of the iconostasis, many people now believe that these are the doors referred to in the call: “The Doors! The Doors! In wisdom, let us attend!”

After dinner at Kyria Maria in Moschoviti Street, a shay back street near the Rimondi Fountain, we left Rethymnon late last night, and returned to Iraklion to catch an early morning flight.

I was back in Dublin eight days after leaving. Rethymnon is still basking in the sunshine, I am assured, but it is raining in Dublin. Summer is gone. Time moves on, but faith remains constant. “Whoever trusts in God is secure.” 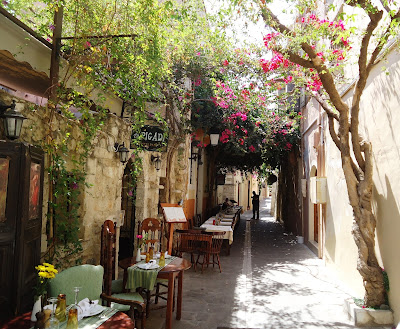 Walking through the streets of Rethymnon yesterday (Photograph: Patrick Comerford, 2013)