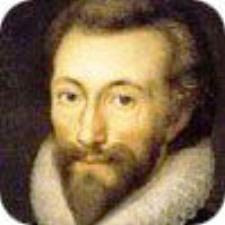 ‘And let once more, by mystic birth,/The Lord of life be born in earth’ … Henry Vaughan

My fourth choice of poem for this Christmas season is ‘Christ’s Nativity’ by Henry Vaughan (1621-1695), a Welsh doctor and metaphysical poet. He is the major Welsh poet of the Commonwealth period, and there has been a renewed interest in his poetry in recent years because of the revival of interest in the poetry of John Donne and his followers.

Henry Vaughan and his twin brother the philosopher Thomas were the sons of Thomas Vaughan. They were born in 1621 in Newton-upon-Usk in Breconshire and the poet spent most of his life in the village of Llansantffraed, near Brecon, where he is also buried.

After attending a local school, Vaughan was sent to Jesus College, Oxford, but he abandoned his pursuit of a degree at Oxford to seek a career in law. But that too was interrupted by the Civil War, and eventually he followed a career in medicine. Although no major Civil War battle was fought in Breconshire, but the effects of the war were deeply felt by Vaughan and his local community, and Vaughan lost his home at that time.

Vaughan took his literary inspiration from his native environment, and had deep love of the Welsh mountains and rivers. His most famous worksare Silex Scintillans(‘The Fiery Flint’), a collection of religious poems published in 1650, and Olor Iscanus (‘The Swan of Usk’), a collection of secular poetry, published the following year. Silex Scintillans was reprinted in 1655 with a second, additional part.

These two collections represent that crucial a period in Vaughan’s life, with allusions to debt and happy living. A fervent topic is the Civil War and he expresses satisfaction at being clean of “innocent blood.” Although he is thought to have been a royalist, his poems express contempt for all current authority and a lack of zeal for the royalist cause.

It appears Vaughan suffered a prolonged sickness that brought him much pain. He interprets this experience as an encounter with death and a wake-up call to his “misspent youth.”

This conversion is credited to the Welsh poet and priest George Herbert, and Vaughan claims that he is the least of Herbert’s many “pious converts.” During this period of his life, around 1650, Vaughan adopts the motto “moriendo, revixi” or: “By dying, I gain new life.”

Vaughan remained deeply indebted to George Herbert, who provided him with a model for his new-found spiritual life and literary career, in which he displayed “spiritual quickening and the gift of gracious feeling” derived from Herbert.

Vaughan’s inspired religious poetry, on which his reputation chiefly rests, is reminiscent of Herbert’s The Temple. Vaughan was then nearly 30 years younger than George Herbert, whom he consciously and intentionally imitates, but he is now considered one of the major metaphysical poets for his works pondering one’s personal relationship with God.

In his poetry, Vaughan was faithful to the themes of the Anglican Church and religious festivals, but found his true voice in the more mystical themes of eternity, communion, nature, and childhood. An example is found in fragment of one of his poems, ‘The World’:

I saw eternity the other night
Like a great Ring of pure and endless light,
All calm, as it was bright,
And round beneath it, Time in hours, days, years
Driv’n by the spheres
Like a vast shadow moved, In which the world
And all her train were hurl’d. 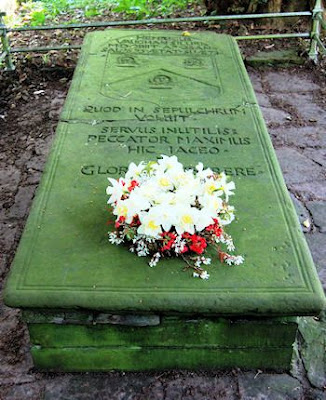 Henry Vaughan died on 23 April 1695 at the age of 74. He is buried in the churchyard of Saint Bridget’s, Llansantffraed, Powys. On his gravestone are his coat of arms consisting of a chevron between three boys’ heads, each with a snakes entwined about the neck. On the stone are words from Vaughan’s poem, ‘The Mount of Olives.’ Fifty years before his death, in his poem ‘To the river Isca,’ he wrote:

When I am layd to rest by thy streams,
And my sun sets, where first it sprang in beams
I’le leave behind me such a large, kind light
As shall redeem thee from oblivious night.

Each year, on the Sunday nearest to the anniversary of his death, a memorial service is held in Saint Bride’s Church, followed by a graveside service and the laying of a wreath on his grave.

In 1650, Vaughan was concerned with the consequences of the rise of the Cromwellian government, and with it the loss of a Visible Church in which he believed. “The consequences of the Revolution which most offended Vaughan,” Christopher Hill writes, "were those affecting religion. It had been tainted, poisoned, had become ‘instead of physic, a disease.’ The church had been despoiled and religion exiled.”

Vaughan endorses the Laudian approach to the Anglican liturgy in poems such as ‘The Dressing,’ ‘The Feast,’ ‘The Throne,’ and ‘Christ’s Nativity,’ which also demonstrates his forthright opposition to the Puritan demands for the removal of Christmas from the calendar of the Church.

The presence of his poetic voice, in those years immediately after the forced abolition of Anglicanism as the church of the land, was an effective witness that the promises of God still apply to those who keep the faith in his promises in such a time. And so, my chosen poem this morning is ‘Christ’s Nativity,’ from Vaughan’s most famous work, his Silex Scintillans.

Awake, glad heart! get up and sing!
It is the birth-day of thy King.
Awake! awake!
The Sun doth shake
Light from his locks, and all the way
Breathing perfumes, doth spice the day.

Awake, awake! hark how th’ wood rings;
Winds whisper, and the busy springs
A concert make;
Awake! awake!
Man is their high-priest, and should rise
To offer up the sacrifice.

I would I were some bird, or star,
Flutt’ring in woods, or lifted far
Above this inn
And road of sin!
Then either star or bird should be
Shining or singing still to thee.

I would I had in my best part
Fit rooms for thee! or that my heart
Were so clean as
Thy manger was!
But I am all filth, and obscene;
Yet, if thou wilt, thou canst make clean.

Sweet Jesu! will then. Let no more
This leper haunt and soil thy door!
Cure him, ease him,
O release him!
And let once more, by mystic birth,
The Lord of life be born in earth.