A unique building on Dame Street, Dublin,
has links with some important churches

No 31 Dame Street was built in 1868-1870 as new premises for the Caledonian Fire and Life Insurance Company (Photograph: Patrick Comerford, 2016)

Some of the unique churches designed by the architect and artist James Edward Rogers (1838-1896) are celebrating their 150th anniversary this year. They include Saint Mary’s Church, Howth, consecrated by the Archbishop of Dublin on 3 July 1866, and Kenure Church in Rush, Co Dublin, consecrated on 4 December 1866.

Saint Mary’s Church, Howth, was built between 1864 and 1866 as a new church to replace a church built 200 years ago in 1816. The tower in the north-west corner is the only part of older church building that was retained. The new church, built to accommodate 450 people, has a five-bay nave with north and south aisles, and a private door for Lord Howth at the east end of the south aisle. Building work started late in 1864. The contractor was Walter Doolin, and the church, which was built at a cost of £2,600, was consecrated on 3 July 1866.

Kenure Church and the nearby Rectory in Rush, Co Dublin, were built for Sir Roger Palmer (1832-1910) of Kenure Park and his estate workers and the church was consecrated on 4 December 1866. Rogers also designed the stained glass in the west window in memory of Mary Ellen Peel, executed by James Powell & Sons.

Rogers was also the architect of Holmpatrick Parish Church in Skerries, Co Dublin, which was consecrated on 2 September 1868. The limestone for the building came from the Milverton quarries, near Skerries, and once again the contractor was Walter Doolin.

Other churches designed by Rogers include Kilfergus Parish Church, Glin, Co Limerick (1865-1870), which was built in the grounds of Glin Castle incorporating the west tower of the old church; Saint Patrick’s Church (1868-1870), Kilcock, Co Kildare, built in the 13th century Gothic style in 1868-1870, and consecrated on 17 March 1870; Kilkeedy Church, Clarine, Co Limerick (post 1868); and Saint Columba's Church, Omagh, Co Tyrone (1871). Rogers was also the architect of Saint Bartholomew’s Vicarage (1872-1873) and the parochial hall in Ballsbridge. 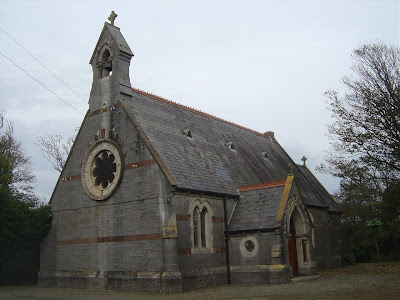 Kenure Church was designed by Rogers and celebrated its 150th anniversary on 4 December 2016 (Photograph: Patrick Comerford)

While they were working on these churches, Rogers and Doolin also worked together on building No 31 Dame Street. This architectural gem is often ignored because of the surrounding ugly and tacky modern buildings on Dame Street, but it is a charming part of the decorative heritage of this street even though is all too easy to pass it by and to ignore it. Yet this is a building I have come to appreciate in recent years because of its proximity to Christ Church Cathedral.

No 31 Dame Street was built in 1868-1870 as new premises for the Caledonian Fire and Life Insurance Company. It is a two-bay Ruskin-style Gothic building with Romanesque elements, strongly influenced by Ruskin's architectural principles.

From 1865, he was living in Cambridge Road, Rathmines, and he was the architect to the Diocese of Meath until the disestablishment of the Church of Ireland in 1869. By 1870, Rogers had moved to 179 Great Brunswick Street, where his friend James Franklin Fuller and William Stirling also had their offices. Most of his recorded work was in connection with the Church of Ireland, and at this time he designed or worked on churches in Dublin and the west of Ireland.

It was during this period that Rogers designed No 31 Dame Street, as well as his churches in Howth, Kenure, Holmpatrick, Glin and Kilcock, as well as the new Vicarage on Clyde Road for Saint Bartholomew’s Church.

But Rogers’s abiding interests were drawing and painting in watercolours rather than architecture. He exhibited at the Exhibition of Fine and Ornamental Arts in Dublin in 1861 and at the Royal Hibernian Academy from 1870 on. He was elected an associate of the RHA on 4 December 1871.

Rogers was elected a Fellow of the Royal Institute of British Architects (FRIBA) in 1874, proposed by James Franklin Fuller, James Joseph McCarthy and Thomas Newenham Deane. But Rogers resigned as FRIAI in October 1874 and moved to London in 1876. He does not appear to have practised as an architect there, and he resigned his fellowship of the RIBA in 1877. However, he continued to exhibit his paintings at the Royal Hibernian Academy until he died. He also exhibited at the Royal Academy (1881, 1882 and 1884), at the Irish Exhibition in London (1888), and at exhibitions of the Dublin Sketching Club and the Dublin Art Club. 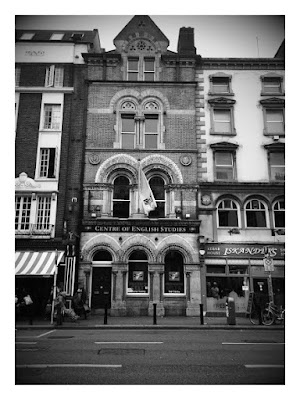 No 31 Dame Street was designed by the architect and artist James Edward Rogers (Photograph: Patrick Comerford, 2016)

The builder of No 31 Dame Street and of many of the churches designed by Rogers was Builder, of Dublin, was Walter Doolin (1819-1900). Walter Doolin was a son of the Dublin carpenter and builder, Walter Doolin of Westland Row.

By 1842, the younger Walter Doolin was working in the family business, and was described by his father as having ‘all the life and fun and amusement of his mother,’ as well as being very clever at business, ‘able to make out an estimate of any work, ever so extensive or difficult.’

When Walter Doolin senior died, in 1842 or 1843, his business passed to his sons, William and Walter Doolin. The brothers ran the firm in partnership from 22 and 23 Westland Row until 1857 or later, but by 1863 Walter Doolin was running the business alone.

In 1857, while the Doolin brothers were still in partnership, the firm was engaged to build additions designed by the English architect George Goldie to the Vincentian Church in Phibsborough, Dublin. This contract became the subject of protracted litigation in 1868, when the builders sued Father Dixon for the balance of payment they claimed they were due to them. The case lasted for more than six months, was finally settled by arbitration.

For some time, Walter Doolin also owned the Ballinasloe lime quarries in Co Galway. He had retired for some years when he died at the age of 81 in September 1900 at his home, The Bungalow, Saint Mary’s Road, Dublin.

Walter Doolin was the builder of No 31 Dame Street (Photograph: Patrick Comerford, 2016)

We are in the third week of Advent. Throughout this time of preparation for Christ’s coming at Christmas, I am praying each morning in Advent and using for my reflections the prayer diary of the Anglican mission agency, USPG (United Society Partners in the Gospel).

This week, those prayers focus on the needs of the Church of Ceylon, the Anglican Church in Sri Lanka. Yesterday, the USPG Prayer Diary told the story of children at the USPG-supported Saint Andrew’s Little Flower Nursery School in Templestowe. The school looks after the children of marginalised tea plantation workers, and the story of two five-year-olds, Durga and Sabish.

Pray for Durga and Sabish, who live with their families on tea estates in Sri Lanka (see article). Pray that they might know a future filled with hope.