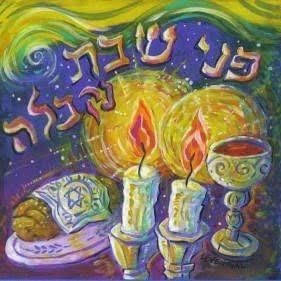 The challot symbolise bread without war, a foretaste of the future, when ‘there will be neither famine nor war, neither jealousy nor strife.’

In his commentaries in the Authorised Prayer Book, the former Chief Rabbi, Lord (Jonathan) Sacks includes a number of Shabbat meditations for Friday evenings and Saturday mornings.

He explains that lighting the Shabbat candles to welcome the Shabbat on Friday evenings is a positive rabbinic commandment, symbolising shalom bayit, or domestic peace. He says the Shabbat candles also symbolise the light of the Divine presence, which illuminates relationships within the home.

In one of his footnotes, Dr Sacks recalls how Rabbi Akiva noted that the Hebrew words for man (ish) and woman (ishah) both contain the letters of esh, ‘fire.’ Each contains one extra letter – yod in the case of man, heh in the case of woman – and that that these two letters together spell one of the names of God. Rabbi Akivah concluded: ‘When husband and wife are worthy, the Divine presence dwells between them.’

The ancient custom is to light two candles, representing the two dimensions of Shabbat: shamor or guarding, observing the prohibitions of Shabbat; and zachor, keeping its positive commandments.

Two loaves of bread are blessed as reminders of the double portion of manna that fell in the wilderness on Fridays so that the people did not have to collect food on the Shabbat itself (see Exodus 16: 22). The challot symbolise bread without war, a foretaste of the future in which, as Maimonides said, ‘there will be neither famine nor war, neither jealousy nor strife.’

Already in Talmudic times, Shabbat was seen as a bride, and the day itself as a wedding.

Dr Sacks continues, ‘Rabbi Chanina robed himself and stood on the eve of Shabbat at sunset, and said, ‘Come let us go and welcome Shabbat the queen.’ Rabbi Yannai donned his robes and said, ‘Come O bride, come O bride’.’

In one of his Shabbat meditations, Dr Sacks recalls how the Hassidic master, Rabbi Levi Yitzhak of Berditchev, was once looking out of his window, watching people rushing across the town square. He leaned out asked one, ‘Why are you running?’

The man replied, ‘I am running to make a living.’

The rabbi replied, ‘Are you so sure that your livelihood is running away from you and you have to rush to catch it up? Perhaps it’s running after you, and all you have to do is stand still and it will catch up with you?’

Still today, in our busy, modern world, Rabbi Sacks observes, Shabbat is the day we stand still and let our blessings catch up with us. Without it, we can be so busy making a living that we hardly have time to live. We risk making the journey while missing the view.

On Shabbat, he says, we cease striving for what we do not have, and thank God for what we have. 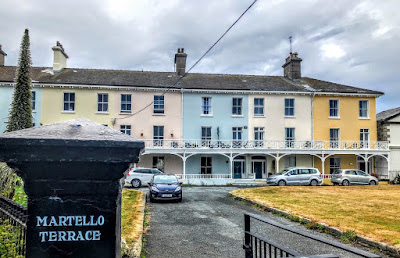 Martello Terrace, Bray … James Joyce once lived at No 1, the first house on the right, and RM Butler lived two doors away at No 3 (Photograph: Patrick Comerford, 2020)

While I was in Bray, Co Wicklow, earlier this week, between watching the swans at Bray Swan Sanctuary and walking along the beach, I stopped at Martello Terrace to admire two Victorian houses. One house is associated with James Joyce, and another with the architect Rudolf Maximilian Butler.

Martello Terrace is part of Bray’s Victorian architectural heritage and is Bray’s earliest, best preserved, and most distinctive seafront terraces. In recent years, well-known residents include the Labour politician Liz McManus and the singer Mary Coughlan.

Undoubtedly, James Joyce’s four years in Bray as a teenager will be recalled by many next week during the celebrations of Bloomsday on 16 June. But it is also worth recalling Bray’s connections with an important early 20th century architect.

Martello Terrace takes its name from the Martello Tower at the north end of the Promenade, the last remaining of three original towers built in Bray. In all, 16 towers were built between Bray and Sandymount in 1804-1805 during fears of a Napoleonic French invasion.

This terrace of eight, largely uniform, three-storey houses was built in 1860. Seven of the houses are two-bay houses, but No 8 at the west end of the terrace has its entrance at the west side.

A veranda and a first-floor, Regency-style balcony continue across the eight houses in the terrace. They face onto the grass-covered esplanade but are separated from it by a small private space now used by the residents for car-parking. 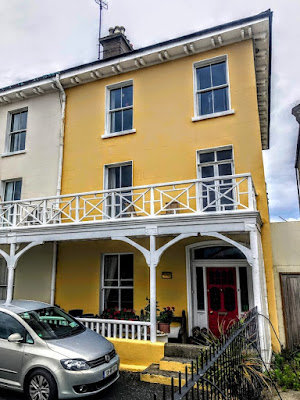 James Joyce (1882-1941) lived at No 1 Martello Terrace between 1887 and 1891. This is a two-bay, three-storey house at the east end of the terrace. The veranda has a low rendered wall with simple railings and steps, and slender iron columns with brackets support the balcony, with its decorative geometric chinoiserie railings.

The façade is finished in painted lined render, the hipped roof is covered in artificial slate and has an overhang supported on paired brackets, and there is a shared rendered chimneystack with corbelling.

At the entrance, the timber and glazed door has narrow sidelights and a segmental-headed fanlight. A glazed door on the first floor leads onto the balcony.

Joyce mentions his childhood home and Bray in his writings, and the Christmas dinner scene in Portrait of the Artist as a Young Man is set in the house. 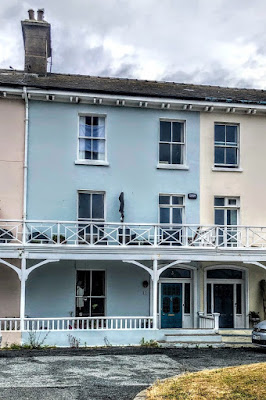 Two doors away, almost in the middle of the terrace, No 3 was briefly the home of the architect Rudolf Maximilian Butler (1872-1943). He lived there in the 1890s, probably moving into No 3 just after the Joyce family had moved out of No 1.

I was writing earlier this week about how Butler was the architect who give the distinctive Tudor-style appearance to the boathouse of the Dublin University Boat Club on the south bank of the River Liffey at Islandbridge.

Butler’s first major architectural success came in 1912, when he won first prize in the competition for designing University College, Dublin, and in 1924 he became the first Professor of Architecture at UCD. He was involved in establishing the Georgian Society, and for many year he was the editor of the Irish Builder.

His daughter, Eleanor Grace Butler (1914-1997), also an architect, became Countess of Wicklow. As Lady Wicklow, she was a Labour senator and became a founding figure in the Glencree Centre for Reconciliation.

Martello Terrace, Bray … takes its name from one of the Martello Towers built over 200 years ago (Photograph: Patrick Comerford, 2020; click on image for full-screen view)

Another well-known architect and builder who lived in Bray was Samuel Henry Bolton (1829-1897), who lived Rath-na-Seer from about 1883 until 1896. This house later became Rath-na-Seer Hotel and is now Jim Doyle’s, a popular pub and restaurant on the seafront. It was built in the Jacobean style as a detached, two-bay, three-storey house.

Although the building was much altered in the later 20th century, it remains a good example of a house that has been converted to commercial use, and it adds much to the rhythm of Bray’s mainly Victorian promenade.

Bolton was one of the leading builders in Victorian Dublin. His directory entries chart a steady rise in his business practice and in his respectability. From being simply a builder in South Richmond Street in the 1850s and 1860s, he acquired a timber and stone yard in South Circular Road, iron works at Portobello Harbour, and a residence in Rathmines Road in the 1870s. He then moved his entire business out to Rathmines Road, to a site by the Grand Canal.

Bolton had acquired a second residence in Bray by 1883. He was also a member of the Rathmines and Rathgar Township Commission and a Justice of the Peace for Co Dublin.

After John died, she moved to Templeogue and was a teacher in Our Lady’s School in Templeogue. Her father, Jeremiah Crowley who was a brother of my grandmother, Maria (Crowley) Murphy (1882-1957) of Millstreet, Co Cork, lived of Wallstown Castle, Castletownroche, Co Cork, which I visited earlier this year.

Tullira or Seanchara House was sold recently after being on the market with an asking price of almost €1.4 million. It was interesting to see this week that since being sold it has been refurbished and remains a family home. 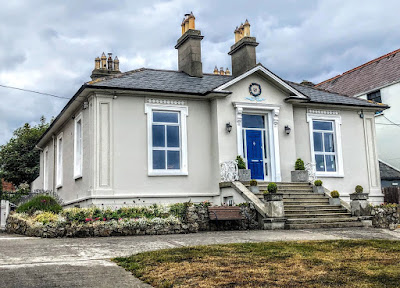