Rev Edwards Comerford Hawkins (1827-1906): The Prisoner of Zenda was written in his vicarage

I was writing yesterday about Captain Basil Maclear (1881-1915) of the Royal Dublin Fusiliers, who was capped 11 times for Ireland, who died on a battlefield in 1915 and who was descended from the Comerford family of Cork and Wexford. The following feature about his cousins, the Revd Edwards Comerford Hawkins and Sir Anthony Hope Hawkins, was published as ‘An Irishman’s Diary’ almost 10 years ago in ‘The Irish Times’ on 13 February 2006:

Yesterday [12 February 2006] was the 100th anniversary of the death of the Rev Edwards Comerford Hawkins, a journalists’ parson and a writer with a strong Irish background.

His fame as a Victorian writer and journalist has vanished in the intervening century, but his literary reputation continues vicariously through a more famous son and nephew.

The only son of a Hertfordshire doctor, he was born on May 15th, 1827. Dr Frederick Hawkins of Hitchin, his sister Anne, and their cousin Susanna Hawkins all married into the Casey family of Cork, their spouses being two of the sons and a daughter of Edwards Casey of Cahirgal and Elmgrove Grove, Cork, and his wife, Jane Comerford. The Comerford-Casey family fortune came from the soap industry in Liverpool, but medicine and the law became the main professions of the family members, who moved with ease between their homes in Cork, Hitchin and Liverpool. There were so many look-alike Comerford-Casey and Hawkins cousins that they often played at passing themselves off as each other.

It came as no surprise when Edwards Comerford Hawkins entered the ministry of the Church of England – four of his first cousins were clergymen too. Rev Henry Ernest Casey became Vicar of Berrow; Rev George Edwards Comerford-Casey was a teacher at Nottingham High School before moving to Nice; Rev William Henry Casey was a curate in Liverpool; and Rev Henry Hawkins was a Victorian pioneer in mental health care. In 1861, Edwards Comerford Hawkins became headmaster of St John's Foundation School. The school was founded in 1851 for the sons of poor clergy, but by 1872, when St John’s moved to Leatherhead in Surrey, Hawkins had transformed it into an English public school.

By now Hawkins was also a well-known journalist and writer, contributing to Smith’s Dictionaries and publishing Spirit and Form in 1881. An invitation from the Dean of Westminster in 1883 to become Vicar of St Bride’s, the journalists’ church in Fleet Street, had obvious attractions and Hawkins soon published a history of Wren’s church.

The youngest Hawkins boy, Anthony Hope Hawkins, went to St John’s while his father was headmaster, before going on to Marlborough and Balliol, Oxford. For a while, Anthony practised at the bar and shared chambers with a future Prime Minister, Herbert Henry Asquith. Despite a brief flirtation with politics – he failed as a Liberal candidate in South Buckinghamshire – young Hawkins found his real interest was in journalism and writing. He began contributing short stories and society sketches to the Westminster Gazette, and as he balanced wig and pen in Fleet Street Anthony lived with his widowed father at St Bride’s Vicarage.

From childhood, Anthony was fascinated with look-alikes and doubles, and later he followed the Titchborne case as his cousin, Sir Henry Hawkins, exposed the claimant to the title as a fraudster. On the afternoon of November 28th, 1893, after winning a case in Westminster County Court, Anthony was walking back to the Temple, playing in his mind with the word “suburb” and the Latin phrase rus rur (countryside), entertaining thoughts of an unknown, unnamed foreign kingdom. As he walked on, two men passed him by separately, one after the other, both sharing uncannily similar features.

He wondered what might happen if they had the same name, swapped places and walked off, each in the other's direction, passing himself off as his look-alike.

Back at his father's vicarage, he began to create Ruritania, and within a month, using the name Anthony Hope, he had finished a new novel about two Rudolfs, The Prisoner of Zenda: being the history of three months in the life of an English Gentleman. When it was published just over three months later, in April 1894, The Prisoner of Zenda was an instant success. Hawkins made up his mind – he gave up the wig for the pen, and more Ruritanian novels followed, including The Heart of Princess Osra (1896), Rupert of Henzau (1898), The King’s Mirror (1899) and Quisanté (1900).

In 1903, Hawkins married Elizabeth Somerville Sheldon, an American 22 years his junior. A year later, Edwards Comerford Hawkins retired from Fleet Street. By now he was living in the shadow of his son’s glory and was largely forgotten as an author and journalist. Edwards died at 78 on February 12th, 1906. Fame and acclaim came two years later to his nephew, Anthony’s first cousin, Kenneth Grahame, with the publication of The Wind in the Willows in 1908.

For his wartime propaganda work, Sir Anthony Hope Hawkins was knighted in 1918. His writing career was waning, but he lived comfortably on the film rights and royalties from new editions of The Prisoner of Zenda until his death on July 8th, 1933.

The first film versions of The Prisoner of Zenda were produced in 1913, 1915 and 1922. But the finest screen version was made in Hollywood in 1937, four years after the author's death, and starred Ronald Colman, David Niven and Douglas Fairbanks.

The film’s success may have been due less to the literary merits of the original novel and more to good timing: it hit the cinemas only a year after the British abdication crisis, which also involved two look-alikes sitting on the throne within months of each other, romantic stories about a woman who had given up one man for another only to see one of them lose his throne for love, while at the same time Continental Europe was beset by intrigues involving dark Teutonic forces.

Ruritania and The Prisoner of Zenda continue to conjure up images of a romantic middle Europe and a mythical time when history wore a rose and politics still danced to the waltz. But perhaps we should not forget the inspiration and motivation to write that the author first received from his father, the vicar-journalist Edwards Comerford Hawkins, or his Comerford and Casey family roots in Ireland.

This feature was first published as ‘An Irishman’s Diary’ in ‘The Irish Times’ on 13 February 2006.

Waiting in Advent 2015 with
Dietrich Bonhoeffer (20) 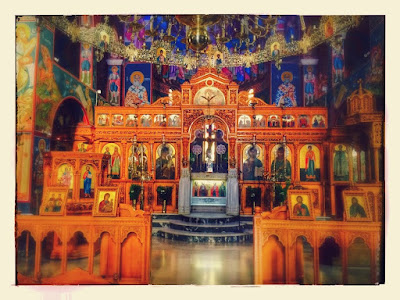 ‘… a spiritual tradition that reaches through the centuries’ … inside the Church of the Four Martyrs in Rethymnon, Crete (Photograph: Patrick Comerford, 2015)

This morning [18 December 2015], I awake to the realisation that there is only one week left to Christmas Day. I have so little done, there are still presents to wrap and cards to write.

But over these past three weeks I have been preparing for Christmas in another way. During the season of Advent this year, I am working my way through my own Advent Calendar. Each morning, I am inviting you to join me for a few, brief moments in reflecting on the meaning of Advent through the words and meditations of the great German theologian and martyr, Dietrich Bonhoeffer (1906-1945).

“The awareness of a spiritual tradition that reaches through the centuries gives one a certain feeling of security in the face of all transitory difficulties.”