Finding cloistered seclusion
in the busy bustle of Sorrento 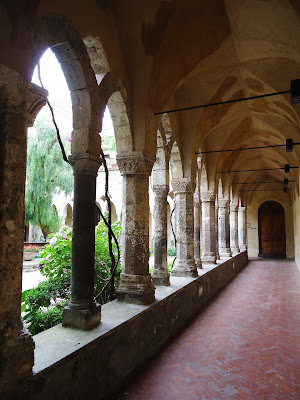 The cloisters beside the Chiesa di San Francesco are a haven away from the bustle of tourism in Sorrento (Photograph: Patrick Comerford, 2013)

The final day of the seven-day programme on the Sorrento Coast was billed as a “full day at leisure, to relax and take in those amazing views ... and practice your Italian.” There was an optional tour of an ice cream factory, with the promise of a delicious gelato to enjoy. But instead I spent the morning at the pool, and noon had passed before two of us caught a local train on the Circumvesuviana line that runs from Naples for one last visit to Sorrento.

The square in front of the station commemorates Giambattista De Curtis, who wrote the song Torna a Surriento (‘Come Back to Sorrento’) with his brother Ernesto De Curtis. 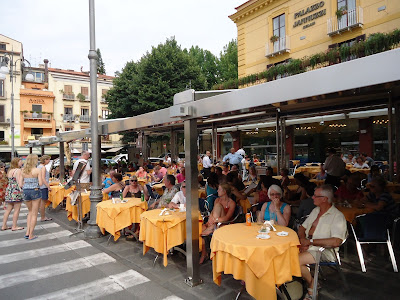 The Piazza Tasso in the centre of Sorrento is at the heart of life for most tourists in Sorrento (Photograph: Patrick Comerford, 2013)

It was a short walk from the rail station to Piazza Tasso in the centre of Sorrento, where we had dinner on Sunday evening on the busy terrace of the popular Fauno Bar. The square is named after Sorrento’s own poet Torquato Tosse (1544-1595), author of the Gerusalemme Liberata. The square has statues to both Tasso and Saint Anthony, and opposite the Fauno Bar stands the baroque Church del Carmine. 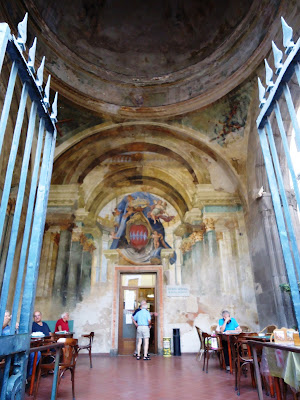 The Sedil Dominova ... now a workingmen’s club but once the seat of Sorrento’s ruling nobility (Photograph: Patrick Comerford, 2013)

From Piazza Tasso, we squeezed our way through the bustling boutiques and tourist shops that line the narrow Via Cesareo, selling limoncello, T-shirts, leather bags, postcards and souvenirs.

At the corner of the narrow Via Cesareo and Via Giuliani, in the heart of old Sorrento, in a tiny square called Largo Dominova is the beautiful Sedil Dominova, with the campanile of Sorrento Cathedral on Corso Italia in the background.

This “new seat of the nobility” is a unique piece of slowly decaying gentility, first built in the 14th century, and rebuilt in the 16th century. The building once belonged to the sedile (seat) – effectively the town council – and it there the nobles met and deliberated and decided the course of civic life of Sorrento. 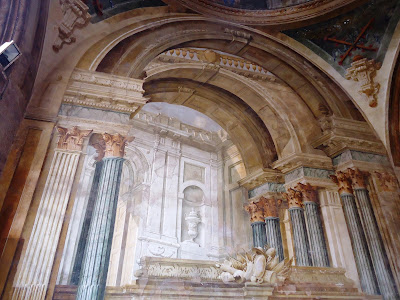 It is an open loggia with expansive arches, balustrades, and a green-and-yellow-tile cupola. It is covered with extravagant frescoes from the 18th century, with amazing trompe l’oeil columns and the coats of arms of the noble families, including the D’Angio and Durazzo families.

Sorrento’s nobles were deprived of their civic role by King Ferdinand IV, the Bourbon King of Naples and Sicily – bent on revenge, perhaps, because he had been deposed twice: once by the revolutionary Parthenopean Republic in 1799, and again by Napoleon in 1805.

This building is last surviving example of the ancient seats of nobility in the Campania region. Today, it is a workingmen’s club, the Societa Operaia di Mutuo Soccorso, with pensioners sitting on the terrace beneath the dome playing cards and sipping coffee. One loud-mouthed tourist – making a virtue of his tiny knowledge of Italian as he read the sign for the working men’s club – exclaimed to his companions: “Oh look, I’ve found the opera house.”

We had lunch on the tiny square that is Largo Dominova in the pizzeria that is named after the Sedil Dominova, and then walked down Via Giuliano to Via San Francesco. 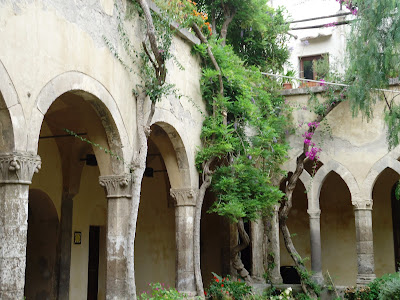 The cloisters in the Franciscan convent have been built in a hybrid mixture of architectural styles (Photograph: Patrick Comerford, 2013)

From the outside, the Church of Saint Francis (Chiesa di San Francesco) looks like a modern church its simple white marble façade was rebuilt in 1926. However, the church is much older, and was founded in the eighth century as an oratory by Saint Anthony, the patron saint of Sorrento, who first dedicated the church to Saint Martin of Tours.

In the 14th century, Franciscan friars transformed this into a church, and it was later rebuilt in the baroque style and embellished with stucco decorations.

Beside the church, the Franciscan convent has a cloister with a hybrid mixture of many architectural styles, from the fourth to the 16th century: rounded arches on two sides, with Arabic ones on the other two.

These tranquil, secluded cloisters, with overhanging bougainvillea, colourful summer flowers and tree-shaded corners, have a quiet, contemplative environment. As we arrived, the cloisters were being prepared for a wedding, but they are also used for musical evenings and concerts.

Beach huts at the Marina Piccola below the Villa Comunale (Photograph: Patrick Comerford, 2013)

From the convent and the cloisters, we strolled on into the Villa Comunale, with its gardens overlooking the Marina Piccola and views out across the Bay of Naples. Below us, there were tinny beaches, swimmers, people on pedaloes and in kayaks, and – that most English of seaside institutions – rows of beach huts.

We then walked back to the cathedral, and up to the Bastioni di Parsono, between Corso Italia and Via del Aranci, to see a surviving section of Sorrento’s old Roman walls and bastion. 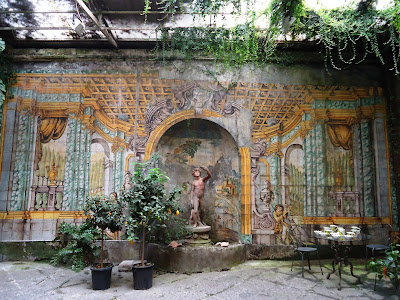 The courtyard inside the 18th century Casa Grande Correale or Correale Mansion on Via Santa Maria della Pieta with its decorated majolica walls (Photograph: Patrick Comerford, 2013)

We made our way to Piazza Tasso through Via Santa Maria della Pieta, another narrow street running parallel to Corso Italia, lined with hidden elegant villas and mansions, and from there to the station and Circumvesuviano back to Seiano.

We entertained until the second or third station by a group of young buskers. Back in Seiano in the evening, we had dinner once again in Ma che Bonte, looking out across the Bay of Naples at the outline of Mount Vesuvius and at the pink, orange and purple streaks left in the sky after the sun had set. 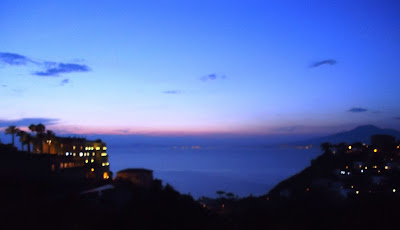 Looking out at the Bay of Naples and the outline of Mount Vesuvius during dinner in Ma che Bonte in Seiano (Photograph: Patrick Comerford, 2013)