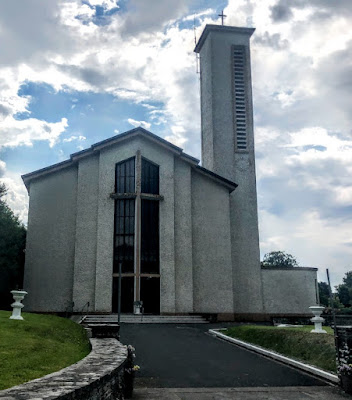 The Church of Our Lady and Saint Michael in Ennistymon, Co Clare, designed by Liam McCormick and Frank Corr (Photograph: Patrick Comerford, 2021)

After last weekend’s ‘road trip’ visit to Comerford houses and sites in Ennistymon, Co Clare, including the former Comerford shop on Main Street and the remains of the West Clare Railway, two of us visited the Church of Our Lady and Saint Michael, one of the interesting pre-Vatican II modern churches in Ireland.

In the Roman Catholic Church, Ennistymon parish is part of the Kilfenora Deanery in the Diocese of Galway, Kilmacduagh and Kilfenora. The parish includes the two neighbouring towns of Ennistymon and Lahinch. The present parish priest is Father William Cummins and the curate is Father Des Forde.

The Church of Our Lady and Saint Michael in Ennistymon is the main church in the parish and was built in 1954 by Father John Jennings to replace an earlier, nearby church, built in the early 19th century. 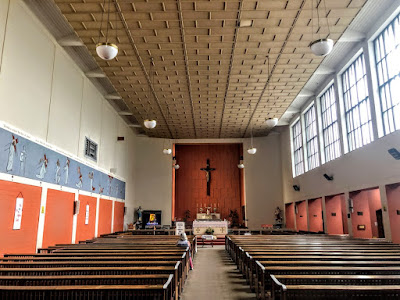 Inside the Church of Our Lady and Saint Michael in Ennistymon, facing the liturgical east (Photograph: Patrick Comerford, 2021)

The Church of Our Lady and Saint Michael was designed by the Derry-born architects, William Henry Dunlevy McCormick (1916-1996) and Francis Michael (Frank) Corr. They successfully won the competition to design a new church for Ennistymon, Co Clare, in 1947. At the time, Liam McCormick was convalescing from tuberculosis in Greencastle, Co Donegal.

McCormick was one of founders of modern Irish architectural movement and also one of the most important church architects in Northern Ireland. He was responsible for designing 27 church buildings and many commercial and state buildings, including the iconic Met Éireann building in Glasnevin. 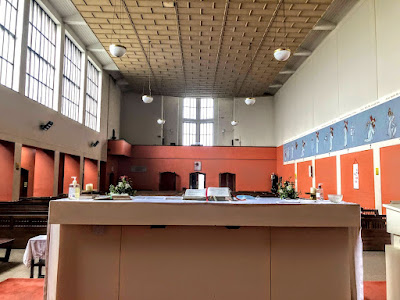 Inside the Church of Our Lady and Saint Michael in Ennistymon, facing the liturgical west (Photograph: Patrick Comerford, 2021)

McCormick and Corr formed an architectural studio, Corr and McCormick, in 1948, and they designed the new church in Ennistymon to seat 1,000 people. The church was built in 1952-1954, the contractors were Farmer Bros of Dublin, and the church was opened on 8 December 1954.

The church is considered one of the first modern churches designed in Ireland. This is a gable-fronted, double-height church, with a stepped central breakfront, a single-bay, four-stage, bell tower, and a single-bay, single-storey, bow-ended baptistery. It is oriented on a west-east axis, rather than the liturgically traditional east-west axis.

There are eight-bay nave elevations and an eight-bay, single-storey, side aisle on the north (liturgical south) or right side. 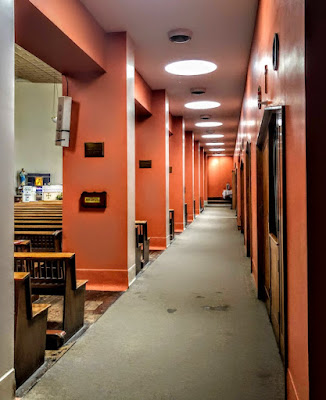 The single-storey, side aisle on the north (liturgical south) side of the church (Photograph: Patrick Comerford, 2021)

The church has roughcast rendered walls, and full-height timber windows at the glazed entrance bay, with concrete mullion and transoms forming a large cross. The timber, multiple-paned clerestory windows, are separated by rendered columns.

The church has a pitched copper sheeted roof on the nave, and there are flat roofs on the tower, aisle and baptistry. The tower belfry has concrete louvres to tower belfry.

Inside, the church retains many of its original features, including built-in confessionals in the side aisle, marble altars, altar rails, a gallery at the rear and the artistically interesting Stations of the Cross.

The Stations of the Cross form one continuous fresco along the south (liturgical north) wall of the church. They were completed in 1955 by the Cork-born Dominican friar and artist, Father Aengus Buckley (1913-1978) of Limerick. They were presented by James Shaloo of Chicago, formerly on Carhuclough, Ennistymon, who died in 1965.

The second church in the parish is the Church of the Immaculate Conception in Lahinch. This too was built in 1954, and also replaced an older church.

The third church in the parish, the Church of Saint Columba in Clouna, was built in 1846. 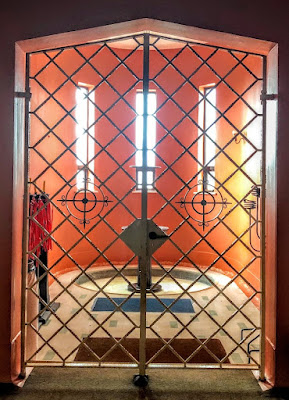 The single-storey, bow-ended baptistery in the (liturgical) south-west corner of the church (Photograph: Patrick Comerford, 2021) 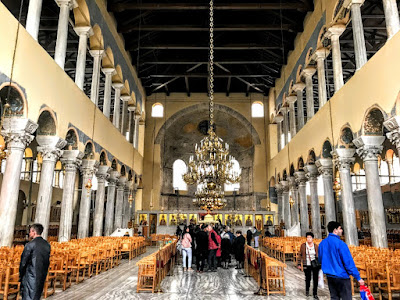 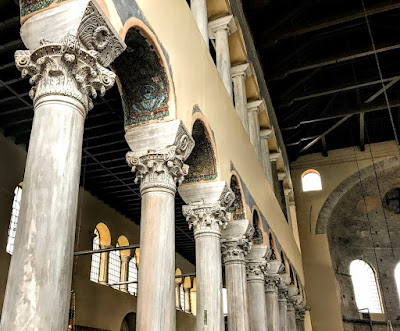 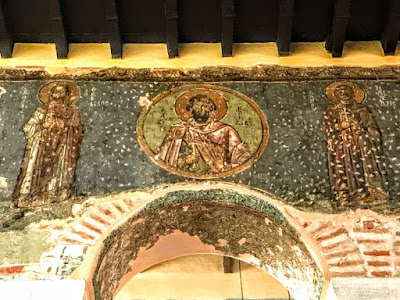 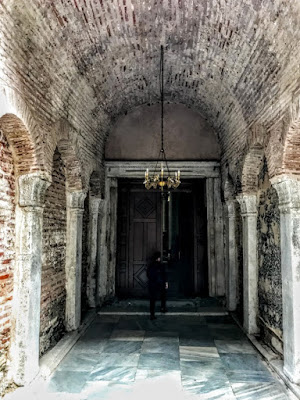