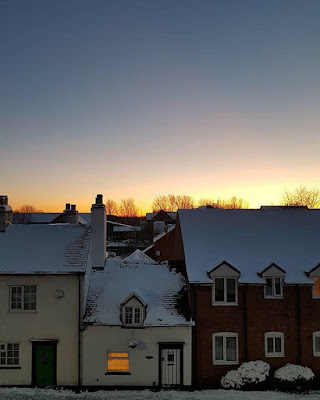 Snow on Beacon Street in Lichfield earlier this month … where did a curate from Lichfield find inspiration on the ‘Feast of Stephen’? (Photograph © Phil Sutcliffe, 2017)

Recent photographs by Phil Sutcliffe, Steve Johnson and others of snow earlier this month at Lichfield Cathedral and in the Cathedral Close, reminded me of some questions I had a few years ago about one of the most popular Christmas carols or hymns – questions that are appropriate to ask again on this ‘Feast of Stephen.’

‘Good King Wenceslas’ is a popular Christmas carol that tells a story of a king braving harsh winter weather to give alms to a poor peasant on the Feast of Stephen,’ 26 December, the day after Christmas Day.

During the journey, the king’s page is about to give up the struggle against the cold weather, but is enabled to continue by following the king’s footprints, step-by-step, trudging through the deep snow.

Immediately after his death, Wenceslas was considered a martyr and a saint, and within a few decades four biographies of him were in circulation. These biographies influenced mediaeval concepts of the rex justus or righteous king, so that he was revered as ‘the father of all the wretched.’

Several centuries later, Pope Pius II followed his example and walked 15 km barefoot through snow and ice in an act of pious thanksgiving.

In 1853, the English hymn-writer the Revd John Mason Neale and his music editor, the Revd Thomas Helmore, collaborated in wring the carol ‘Good King Wenceslas,’ which first appeared that year in Carols for Christmas-Tide (1853).

Helmore set the lyrics to a tune based on a 13th-century spring carol, Tempus adest floridum (‘The time is near for flowering’), first published in 1582 in Piae Cantiones, a Finnish song collection of 74 songs compiled by Jaakko Suomalainen, the headmaster of Turku Cathedral School.

Around 1853, the British ambassador in Stockholm, GJR Gordon, gave a rare copy of Piae Cantiones to Neale, who was then the Warden of Sackville College, East Grinstead, Sussex, and who was well-known for his interest in early music. Neale in turn passed the book on to Helmore, then the Vice-Principal of Saint Mark’s College, Chelsea, and who was a known expert in the interpretation of the mensural notation in which the tunes were written.

Neale translated the texts into English, or in a few cases wrote completely new texts. Together, Neale and Helmore published 12 of the tunes that year as Carols for Christmastide, and a dozen more the following year as Carols for Eastertide (1854).

Helmore went on to publish a more substantial collection, The Hymnal Noted, where the texts were mostly Neale’s translations from the Latin.

However, the text of ‘Good King Wenceslas,’ which is usually attributed to Neale, bears no semblance to the words of Tempus adest floridum, which was a Spring carol and had no associations with either winter or Christmas. Some critics say Neale may have written the words some years earlier, since he repeated the legend of Saint Wenceslas in his Deeds of Faith (1849). Some Czech sources say Neale’s lyrics are a translation of a poem by the Czech poet Václav Alois Svoboda.

In the Oxford Book of Carols (1928), the editors, Percy Dearmer, Ralph Vaughan Williams and Martin Shaw, were critical of this carol, describing it as one of Neale’s ‘less happy pieces.’ It has been dismissed as ‘ponderous moral doggerel’ and as ‘poor and commonplace to the last degree,’ and these three editors hoped that ‘Good King Wenceslas’ would ‘gradually pass into disuse.’

This carol is not included in either the New English Hymnal or the Irish Church Hymnal of the Church of Ireland. Perhaps the editors agreed with Dearmer, Smith, Vaughan Williams and other critics; but they may have also rejected it because this carol makes no mention of Christ, despite the fact that it provides an exemplary model of discipleship. Nonetheless, this remains a well-loved and popular carol at this time of the year, and it has included in many popular collections for over 150 years. 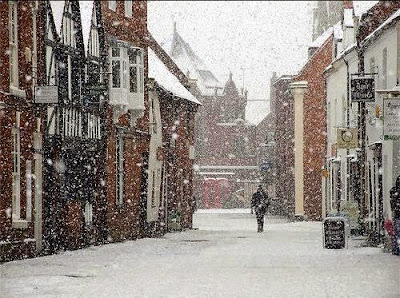 Trudging through the snow in Dam Street, Lichfield, some years ago (Photograph: BBC)

Perhaps the question to ask may be whether John Mason Neale ever wrote ‘Good King Wenceslas.’ The true author may have been Neale’s collaborator, Thomas Helmore. Together, Helmore and Neale wrote other popular carols, including in ‘O Come, O Come, Emmanuel’ (1853).

But the inspiration for the lyrics for ‘Good King Wenceslas’ may have come to Thomas Helmore first after he trudged through 93 miles of snow, bravely and alone, from London to Stratford one Christmas.

Was the memory of this tough winter walk through the snow, deep and crisp and even, so formative that it shaped the words of a popular carol, but the credits went to both Neale and Helmore to avoid confusion at the editing and publishing stages?

Thomas Helmore (1811-1890) was born in Kidderminster, Worcestershire, on 7 May 1811, the son of the Revd Thomas Helmore, an Anglican priest who left the Church of England the previous year to become the minister of an independent chapel in Kidderminster in 1810. The Helmore family moved to Stratford-upon-Avon in 1821.

The younger Thomas Helmore went to school with his brother Frederick at Mill Hill in London. He returned to the Stratford and in the 1830s became the choirmaster and organist at Holy Trinity Church, the parish church where William Shakespeare was baptised and where he is buried.

Helmore formed a choir that rivalled those in many cathedrals. But he upset some of his father’s friends when he enticed some members of Rother Street Congregational Church (now the United Reformed Church), where his father had been minister, to join the choir at Holy Trinity Church. He was also the founder and first conductor of the Stratford-upon-Avon Choral Society. But despite his successes, he eventually decided to seek ordination in the Church of England.

When he went up to Oxford in 1837, the school his father had founded closed. He studied at Magdalen College and graduated BA in 1840. That year, he was ordained deacon and priest in the same year by the Bishop of Lichfield, James Bowstead, who ordained him priest earlier than is usual by special dispensation. 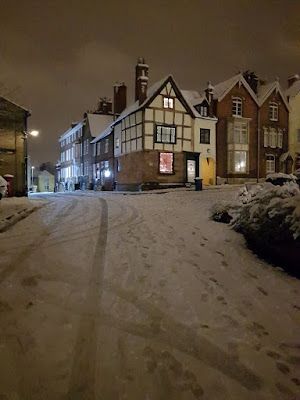 Snow in the Cathedral Close and at Lichfield Cathedral earlier this month (Photograph © Steve Johnson, 2017)

Helmore was appointed the curate at Saint Michael’s Church, Lichfield, and a priest-vicar in Lichfield Cathedral, and he spent the next two years in Lichfield, until 1842.

As the curate of Saint Michael’s, he was a favourite with both rich and poor. In Lichfield Cathedral, he made himself familiar with ‘the beautiful harmonies of the 16th and 17th centuries, and their admirable fitness for religious worship’ including motets and anthems founded on the old Gregorian modes of which he was to become the popular exponent.

The beautiful voice of the new priest-vicar was brought to perfection by systematic practice, and working closely with Fearsall, the principal tenor in the cathedral, and Machin was leading bass. His voice soon placed Helmore at the head of the list of cathedral vicars or minor canons in England. He was particularly remembered for his rendering Tallis’s Litany and his ‘reverential delivery’ of Agnus Dei, which was regarded as ‘a masterpiece of vocalisation.’

Helmore’s contemporaries and friends at Lichfield Cathedral included Canon William Gresley, author of The Siege of Lichfield and other historical books, and the Revd Francis Edward Paget (1806-1882), Rector of Elford and author of Tales of the Village and other books. All three were popular and they supported and promoted the Tractarian movement.

It was with mingled feelings of regret and hopeful anxiety that Helmore left Lichfield Cathedral, its quiet precincts, and the friends he had made at Lichfield after two years. He resigned as priest-vicar and as curate of Saint Michael’s, and in 1842, he was appointed Vice-Principal and Precentor of Saint Mark’s Training College, then in the course of formation in Chelsea.

Saint Mark’s was the first Choral Training College in England, training teachers and choir leaders for the Church of England. There Helmore’s main responsibility was training students to sing a daily unaccompanied choral service in the college chapel. In the basic musical training, he was assisted by John Pyke Hullah. With his attention, the choir’s repertoire grew to include anthems by Gibbons and Byrd and motets by Palestrina, Vittoria and Marenzio.

At the time, there was a growing interest in plainsong among Anglican musical circles. The 16th-century Booke of Common Praier Noted of John Merbecke was republished in 1844. In the same year, Helmore’s friend, the artist William Dyce (1806-1864), published his Book of Common Prayer with Plain Song. Soon Helmore was determined to become involved in this research and to contribute to it.

In 1845, he proceeded MA at Oxford, and in the following year, as a result of his growing reputation as a choirmaster, he succeeded William Hawes as Master of the Choristers of the Chapel Royal, Saint James’s, where he was admitted one of the priests-in-ordinary in 1847.

One of his early pupils in the Chapel Royal was the young Arthur Sullivan (1842-1900), the son of an Irish-born bandmaster and later to achieve fame in the partnership of Gilbert and Sullivan. 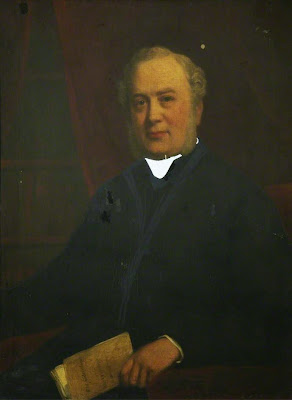 The Revd Thomas Helmore ... for two years he was a curate in Lichfield. Is he the true author of ‘Good King Wenceslas’?

In 1849, Helmore completed The Psalter Noted the first of a series of similar works.

Helmore was involved with Neale in the Ecclesiological Society, founded as the Cambridge Camden Society and dedicated to the revival of the ancient liturgical practices of the Church of England. He wrote the music for three of Neale’s translations in Hymns of the Eastern Church (1862): ‘Peace, it is I,’ ‘The Day is Past and Over,’ and ‘’Tis the Day of Resurrection.’

In 1872, he was appointed Rector of Beverstone, Gloucestershire. But he resigned from the parish immediately after his appointment, and remained at Saint Mark’s until 1877.

Helmore’s interest in plainsong led him to make several visits in 1875 and later to the Abbey of Saint Gall in Switzerland, where he worked on an ancient manuscript supposed to be an accurate copy of a book on Gregorian chant written by Saint Gregory the Great. His Primer of Plainsong (1877) later came to be regarded as the standard work on the subject.

He retired from Saint Mark’s in 1877. He died at his home in Saint George’s Square, Pimlico, on 6 July 1890, and was buried in Brompton Cemetery.

Praying at Christmas with USPG
and Lichfield Cathedral
(2): 26 December 2017 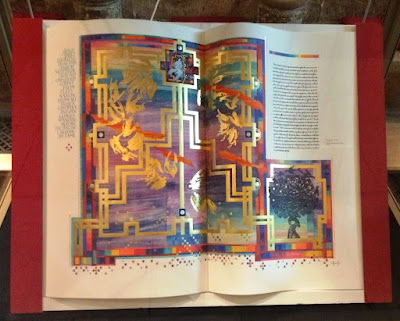 ‘Give thanks for those whose inspiration is the Law, the Prophets and the Writings of Holy Scripture’ … pages from a hand-made copy of Saint John’s Gospel in the ‘Holy Writ’ exhibition in Lichfield Cathedral some years ago (Photograph: Patrick Comerford)

Give thanks for those whose inspiration is the Law, the Prophets and the Writings of Holy Scripture, that they may find in its pages wisdom, challenge and hope.