‘Christ the Beggar’ … a sculpture by Timothy Schmalz on the steps of Santo Spirito Hospital near the Vatican (Photograph: Patrick Comerford, 2017)

There is no escape in Rome from thinking about the crisis in housing and homelessness in Dublin. People from every age group can be seen begging on almost every street corner, and not just in the areas seen as tourist traps.

Homeless couples and individuals can be easily identified as they walk the streets. Clusters of homeless people gather on the steps of many churches.

It was interesting this week to see a large group of homeless men gathered on the steps of the Chiesa Nuova, off the Corso Vittorio Emanuele, which is one of Rome’s main streets, running from the bridge over the Tiber to by Piazza Navona. The church and the oratory beside it were founded by Saint Philip Neri, whose work among the poor, the sick and the homeless earned him the title of ‘Apostle of Rome.’

The ‘Homeless Jesus’ project by the Canadian sculptor Timothy Schmalz provides an interesting link between Christ Church Cathedral, Dublin, and the homeless crises in both Dublin and Rome.

One of the most photographed features at Christ Church Cathedral is the statue of the ‘Homeless Jesus’ by Timothy Schmalz, who has been sculpting large scale sculptures for almost three decades. He describes many of his works as visual translations of the Bible, and quotes Saint Gregory the Great, who said that ‘art is for the illiterate,’ an effective way of educating the general population.

The bronze sculpture of the ‘Homeless Jesus’ shows Christ as a homeless person, sleeping on a park bench. The original sculpture was installed at Regis College, University of Toronto, in early 2013. Since then, other casts have been installed at churches and cathedrals throughout Canada and the US.

In April 2014, his sculpture was installed outside the small Episcopalian Church of Saint Alban in Davidson, North Carolina. One evening soon after, the local police had a phone call from a woman expressing concern – she thought she had seen a real homeless person in flesh and blood lying on the bench as she passed by on the other side of the street.

His first sculpture outside North America was installed on the grounds of Christ Church Cathedral, Dublin, in 2015. Christ is shown as a man lying down on a park bench, his body almost entirely covered by a thin blanket, his face shrouded. The only indication that this is the Crucified Christ is the feet poking out under the blanket, bearing the marks of the crucifixion.

The artist decided to depict Christ like this after seeing a homeless person sleeping on a bench outside one Christmas. ‘That is Jesus. That is how we should perceive the least among us in our heart,’ Schmalz has written.

Since then, many similar sculptures have been installed in Australia, Cuba, India, and Spain. At the start of Holy Week last year, a bronze sculpture of the ‘Homeless Jesus’ was also placed in a courtyard in the Vatican, at the entrance to the Office of Papal Charities.

This week, I have seen two similar statues by Timothy Schmalz outside the entrance to the new wing of Santo Spirito Hospital on the banks of the River Tiber in Rome, close to the main entrance to the Vatican. 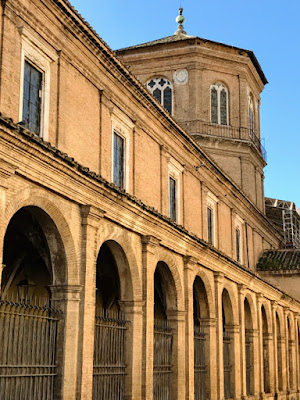 The Church of Santo Spirito in Sassia, close to the entrance to the Vatican, was first built as a church by an English Saxon monarch, King Ine of Wessex, who died in Rome in the year 728.

The hospital attached to the church is the oldest hospital in Rome and was founded after a nightmare experienced by Pope Innocent III (1198-1216). In his dream, the Pope saw angel who showed him the bodies of Rome’s unwanted babies dredged up from the River Tiber in fishing nets. As a result, the Pope decided to build a hospital for paupers.

In the Middle Ages, unwanted infants were passed into the hospital through a revolving, barrel-like door, the rota. When Martin Luther visited the hospital in 1511, he was shocked by what he saw, but he exaggerated the reports he heard and claimed the unwanted babies were the Pope’s own children.

The church was rebuilt in 1538-1544 after the sack of Rome in 1527, and the hospital survives to this day, continuing to care for the poor and the homeless. 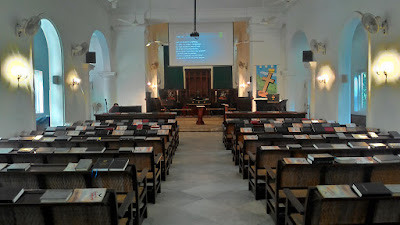 Inside All Saints’ Church, Jakarta … this week, the USPG Prayer Diary focuses on the needs and work of the Anglican Church of Indonesia

This is the last day of my short city break in Rome [5 January 2017]. During these few days I have been visiting some important sites in Church history, and finding time too for prayer and for reflection.

We are still in the Christmas season, and each morning throughout the Twelve Days of Christmas I am using the prayer diary of the Anglican mission agency, USPG (United Society Partners in the Gospel), for my morning prayers and reflections.

Pray for church leaders in Indonesia as they seek to nurture Anglicans in discipleship. Pray that God might bless all Christians in their spiritual path.