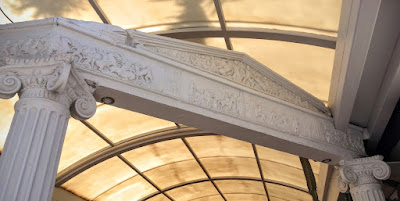 Figures from the Parthenon Marbles decorate a bar in Platanes (Photograph: Patrick Comerford, 2016)

Some political cynics might ask whether Britain or America ever were great. In the British context, Great Britain refers to a geographical reality and not a political past, colonial or imperial.

But even if they were once great, Trump, Gove or Johnson are hardly the people to recover greatness, British or American, that has been gravely injured by isolation, bigotry and the dangerous, frightening rise in racism.

Interestingly, nobody today calls for making Greece great again, apart from the lunatics on the far-right in disgusting neo-fascist groups such as Golden Dawn.

The idea of a Great Greece died politically with the failure of the Megali Idea (Μεγάλη Ιδέα) or ‘Great Idea’ and irredentist nationalism that hoped for a Greek state encompassing all ethnic Greek-inhabited areas, including large parts of Anatolia and the former Byzantine Empire.

It was a vision of a Greece that stretched from the Ionian Sea to the west, to Asia Minor and the Black Sea to the east and from Thrace, Macedonia and Epirus to the north, to Crete and Cyprus to the south, with the Great City or Constantinople as its capital.

The borders of the modern Greek state were settled in the 1940s with the incorporation of the Dodecanese islands, which had once been occupied by Italy. 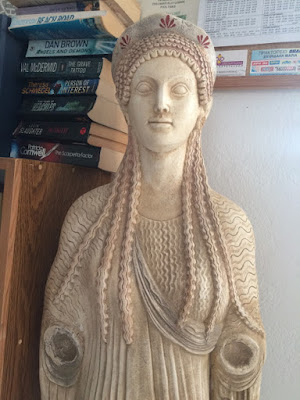 Greeks are conscious of the greatness of their civilisation (Photograph: Patrick Comerford, 2016)

But Greek greatness does not depend on territory and is not limited by borders. Unlike ‘Leave’ voters in Britain, or vocal supporters at a Trump rally, Greeks by and large do not suffer from any national sense of inferiority or victimhood. Greeks know they are great, and are always conscious that they are part of a great civilisation, the heirs to a classical identity that has never been lost over the course of time or the passing of centuries.

A statue of Asklepios, the god of medicine, outside a house in the mountains above Tsesmes and Platanes (Photograph: Patrick Comerford, 2016)

Across the village square in Platanes from where I am staying stands a bar called the Akropolis Pub. The entrance is through a portico that would be seen as totally tasteless in Ireland, particularly at the entrance to a newly-built house in the countryside. But here there are reminders of the greatness of ancient Greece, with classical columns and miniature reproductions of the Parthenon marbles that languish in the British Museum.

In many bars there are reproductions of Minoan princes or the statues of the gods and goddesses of Olympus, and no-one – apart from the tourist and the visitor – regards them as being out of place.

Two restaurants where I have eaten further east along the old road that once ran between Rethymnon and Iraklion are called Vergina and Vergina II. They use as their symbol the Macedonian star found by archaeologists in the grave of Philip II, father of Alexander the Great.

Greatness is inherited by Greeks. They can be brash, crude and even tasteless about it. But they never need to assert it for fear of losing their identity in a Europe they know owes them far more than it ever acknowledges these days. 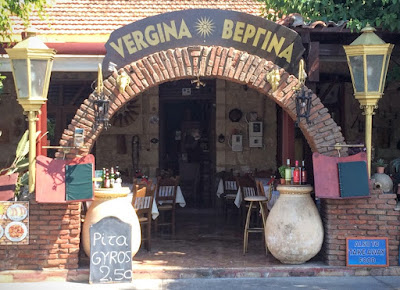 Remembering Philip II and Alexander the Great in a street-side restaurant in Platanes (Photograph: Patrick Comerford, 2016)