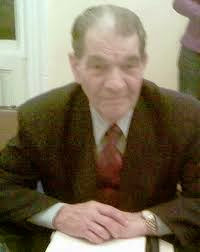 The latest edition of the SIPTU NRSC Newsletter (Issue 11, November 2014), devotes its front page to the following feature:

“I knew Tommy well when I lived in Wexford in the early and mid-1970s. I was working as a journalist with the Wexford People and was an active trade unionist. I became involved in the Labour Party at the time of the 1973 general election.

“At that time, Tommy worked closely with John Howlin in what was then the Irish Transport & General Workers’ Union. I was living around the corner from the Corish Memorial Hall, where the Union had its offices. There were many late night meetings with Tommy in the smoke-filled room at the back of the Hall, and many post-mortems much later in the Tower Bar!

“Tommy was one of Wexford’s true gentlemen. There was always a spring in his step, a smile on his face and a twinkle in his eye.

“After many years after of political and trade union activism, Tommy was elected Mayor of Wexford for the first time in July 2001. He took office only two weeks after the death of his wife Betty.

““My one regret is that my darling Betty is not here with me,” he said on the night of his election.

“It was a moment he had long waited for. Especially as the honour of being mayor of his home town had been snatched from him 22 years earlier when a pact arrangement collapsed.

“He was proud to be elected Mayor for a second term in 2005 and pledged to do all he could to achieve progress in Wexford, from the refurbishment of the municipal swimming pool, to improvements in housing, to enhancing the town. “I have always considered Wexford Quay the gem of Wexford and I intend to enhance that gem by putting a fountain in Crescent Quay,” he said.

“Tommy had a long and distinguished career both as a Councillor and trade union official. He effectively had two separate political careers, first serving as a Councillor in the 1970s until he lost his seat as part of a clean-out of sitting Councillors in the 1979 local elections. But he returned to politics almost two decades later and eventually in 2001 was honoured to become Mayor of Wexford for the first time.

“Tommy was instrumental in the setting up of the Wexford Film Commission, a sub-committee of Wexford County Council – which promoted Wexford as a location fpr film shoots, and he was justly proud when Stephen Spielberg chose Curracloe for the D-Day sequence of his film ‘Saving Private Ryan’ in 1997.

“A kind and generous man, he was noted for his quick wit and turn of phrase.

“Speaking after Tommy’s death, Councillor George Lawlor praised his contribution to life in Wexford both as a public representative and a trade union official.

“ “Tommy Carr was a great friend and colleague who was there in good times and in bad. I was with him shortly before he died and that glint was still in his eye, even though we knew his time was short. We bade each other farewell with his usual strong handshake. In his 86 years he brought a smile to many a face with his infectious charm and good humour. He will be remembered with fond affection,” said Lawlor.

Tommy was predeceased by his beloved Betty who died in 2001 and by his brothers Willie, Frank, Eamonn, Pat and Teddy, who died in the Battle of Arnham in World War II.

He is survived by his nephew Ger Coughlan, who travelled from his home in California to look after him when he became ill.

Mayor of Wexford, George Lawlor and councillors led the funeral cortege as it left Bride Street Church in Wexford. Members of the Labour Party formed a guard of honour. Tánaiste Joan Burton, the Bishop of Ferns, Debis Brennan, as well as SIPTU officers, staff – active and retired – and members were all in attendance.

Our thanks to the Rev Canon Prof Patrick Comerford, Church of Ireland (Anglican) for allowing us to reproduce this personal tribute to his friend Tommy Carr.