They’ve got an awful lot of coffee in Brazil ... even if they have no more football 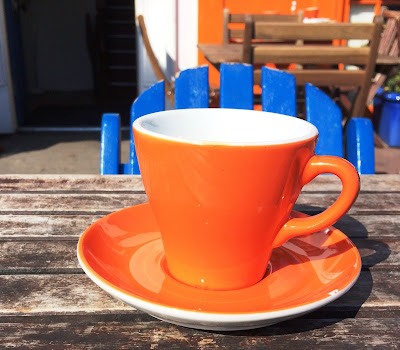 Am I suffering from World Cup withdrawal already?

No more football on television – well not until some time in August ... at the latest.

No more late nights sitting up until midnight for extra time and penalty shootouts.

No more late-night exercise from jesticulating, jumping up and down and making sure the vocal cords are fit.

But there some few myths that are being pedalled that need to be challenged and even dismissed:

Despite all the hype, England won the World Cup only once – back in 1966.

The worst defeat Germany ever inflicted on any side was in 1938 when Germany eliminated Austria. Hitler’s forceful annexation of Austria that year forced Austria to withdraw, leaving 15 nations in the tournament, including a German side that included some Austrian players.

When we are counting Brazil’s World Cup finals, we should remember there was no final in 1950. Although the result is often given as Uruguay 2 Brazil 1, this was only one of four matches played at the same time to decide which of eight teams would win.

Some teams that played in previous World Cups are never going to be seeded again: apart from West Germany and East Germany, Czechoslovakia, the Soviet Union, Yugoslavia and the short-lived Serbia and Montenegro no longer exist.

Even Saar fielded a team as a separate state until 1956. The short-lived Saar Protectorate existed from 1947 to 1957. It was partitioned from Germany after World War II and was administered by France until it joined West Germany in 1957 as the smallest area state in the Federal German Republic. Saarland took part in the qualifying section of the 1954 FIFA World Cup, but failed to qualify after coming second to West Germany ... but ahead of Norway.

FIFA plays its own game of UN Security Council: it says Russia succeeds the Soviet Union, Serbia succeeds both Yugoslavia and Serbia and Montenegro, and the national team of Czech Republic succeeds the Czechoslovakia – which is hardly cheery news for Ukraine, Slovakia, Croatia, Bosnia, Montenegro and FYR Macedonia, among others, but might be good news for Ruritania’s prospects.

Forget Nike, Adidas and all the other sponsors ... India had to withdraw from the 1950 World Cup when the players were not allowed to play barefoot.

Hungary may hold the record for scoring the most goals when they beat El Salvador 10–1 in 1982, but I like the joke told by Martin Pennington, a letter-writer in the Guardian this morning: the hapless Frank Haffey was Scotland’s goalkeeper on the day Scotland was beaten 9-3 by England in 1961. Fans jokingly asked afterwards “What’s the time?” to hear the response: “Nearly ten past Haffey.”

Meanwhile, if you miss those breaks that announced it was time to switch on the kettle, here’s a short reminder:

That cartoon told me it time to make a cup of coffee. And so often in the past few weeks I was reduced to frivolity as I thought of this Frank Sinatra hit written by Bob Hilliard and first recorded in 1956 – a year when there was no World Cup competition:

Way down among Brazilians
Coffee beans grow by the billions
So they’ve got to find those extra cups to fill
They’ve got an awful lot of coffee in Brazil.

You can’t get cherry soda
’Cause they’ve got to fill that quota
And the way things are I’ll bet they never will
They’ve got a zillion tons of coffee in Brazil.

No tea or tomato juice
You’ll see no potato juice
The planters down in Santos
all say “No, no, no.”

A politician’s daughter
Was accused of drinking water
And was fined a great big fifty dollar bill
They’ve got an awful lot of coffee in Brazil.

You date a girl and find out later
She smells just like a percolator
Her perfume was made right on the grill
Why they could percolate the ocean in Brazil.

And when their ham and eggs need savour
Coffee ketchup gives ’em flavour
Coffee pickles way outsell the dill
Why they put coffee in the coffee in Brazil.

So your lead to the local colour
Serving coffee with a cruller
Dunking doesn’t take a lot of skill
They’ve got an awful lot of coffee in Brazil.

For, as TS Eliot says, 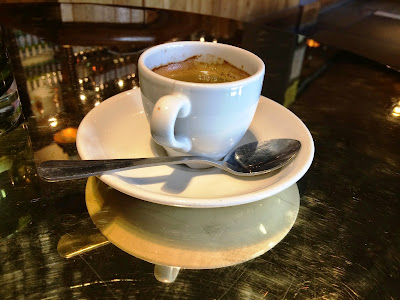 I have measured out my life with coffee spoons ... a cup of coffee in Lichfield on a Saturday morning last month (Photograph: Patrick Comerford, 2014)