‘Where are the songs of Spring? Ay, where are they?
Think not of them, thou hast thy music too …’ 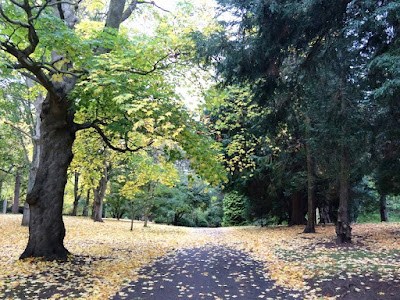 ‘When yellow leaves, or none, or few, do hang / Upon those boughs which shake against the cold’ … in the National Botanic Gardens, Glasnevin, this afternoon (Photograph: Patrick Comerford, 2015)

That time of year thou mayst in me behold
When yellow leaves, or none, or few, do hang
Upon those boughs which shake against the cold,
Bare ruined choirs, where late the sweet birds sang.
In me thou see’st the twilight of such day
As after sunset fadeth in the west;
Which by and by black night doth take away,
Death’s second self, that seals up all in rest.
In me thou see’st the glowing of such fire,
That on the ashes of his youth doth lie,
As the deathbed whereon it must expire,
Consumed with that which it was nourished by.
This thou perceiv’st, which makes thy love more strong,
To love that well which thou must leave ere long. 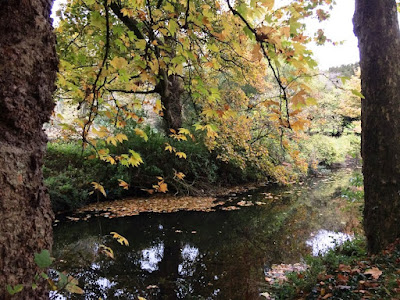 The ode To Autumn by John Keats is the most anthologised English poem.

In his poem, Keats recalls the Greek myth of Persephone, Demeter, and Hades, in which Demeter, the goddess of the earth, casts the land into a permanent winter when her daughter, Persephone, is kidnapped by Hades.

Persephone is eventually able to return from the underworld, but only for half the year. In celebration, Demeter brings Spring and Summer to the land. But when her daughter must return to the world of the dead, Demeter brings death to the earth in the form of Autumn and Winter.

In this poem, Keats offers an acceptance of this cycle of life and death. In the final stanza, the speaker addresses a personified Autumn, asking:

Where are the songs of Spring? Ay, where are they?
Think not of them, thou hast thy music too …

But the speaker then realises that the approach of death brought by Autumn can be just as beautiful as the promise of life found in the Spring. 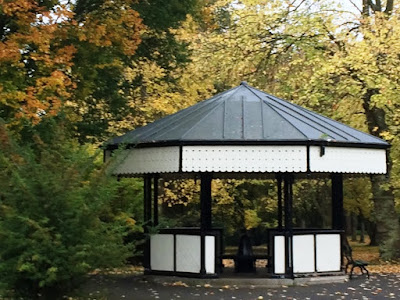 The late stages of Autumn arrived in Ireland not gently but almost with ferocity this morning.

After a gentle autumn that was almost like an Indian Summer, this morning brought in heavy rain storms and strong gusts that moved quickly across the land.

It was a damp squid for the beginning of the most unusual bank holiday that exists in any European country.

When the October bank holiday on the last Monday in October was announced almost 40 years ago in February 1977 by the then Minister for Labour, Michael O’Leary, it came as a surprise to his cabinet colleagues and to employers.

After O’Leary did his “solo run,” the Minister for Finance, Richie Ryan, tried to have the decision reversed by the cabinet a month later. He accused O’Leary of “making the announcement contrary to the government’s decision” and said it was “entirely unnecessary and inappropriate.”

O’Leary’s surprise announcement also angered the Irish Employers’ Confederation (IEC), which wrote to the Taoiseach, Liam Cosgrave, complaining there had been no prior consultation.

However, O’Leary held firm and he signed regulations in June to sanction the new public holiday.

His solo run has since meant the last Monday in October has become the traditional day for the running the Dublin Marathon. 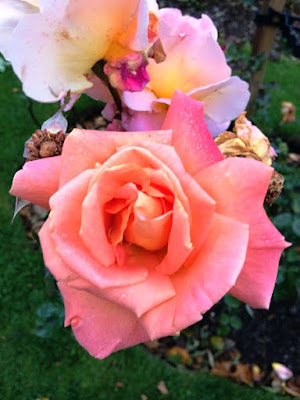 The last of the summer roses in the Botanic Gardens this afternoon (Photograph: Patrick Comerford, 2015)

Traffic was going to be snarled up throughout the city Dublin as the marathon straggled on for hours, and two us drove around the city on the M50 rather than trying to go through it, and went for a walk in National Botanic Gardens in Glasnevin to see the autumn leaves falling.

There was still a hint of that “Indian Summer” in the Rose Garden, with some roses still in bloom. But the Pumpkin Painting competition and displays left us with no doubt that Autumn is about to turn to Winter. 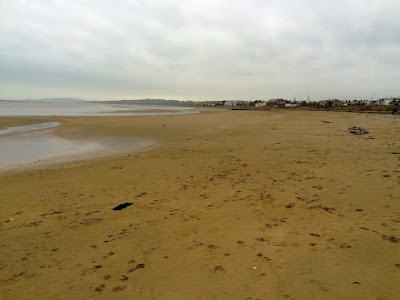 An empty beach at the South Strand in Skerries this afternoon (Photograph: Patrick Comerford, 2015)

We then decided to experience today’s blustering storm, and continued on further north to Skerries, where we had lunch in Da Vino before going for a walk on the beach and around the Harbour.

The tide was out and the South Strand was deserted, and but for one or two other strollers we had it all to ourselves.

By the time we reached the Harbour, the storm winds were whistling through the riggings at Skerries Sailing Club.

It was time to buy some newspapers, return home and wrap up warmly for the evening. 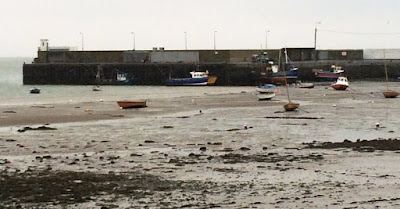 Autumn colours in the Harbour in Skerries this afternoon (Photograph: Patrick Comerford, 2015)

Season of mists and mellow fruitfulness,
Close bosom-friend of the maturing sun;
Conspiring with him how to load and bless
With fruit the vines that round the thatch-eaves run;
To bend with apples the moss’d cottage-trees,
And fill all fruit with ripeness to the core;
To swell the gourd, and plump the hazel shells
With a sweet kernel; to set budding more,
And still more, later flowers for the bees,
Until they think warm days will never cease,
For Summer has o’er-brimm’d their clammy cells.

Who hath not seen thee oft amid thy store?
Sometimes whoever seeks abroad may find
Thee sitting careless on a granary floor,
Thy hair soft-lifted by the winnowing wind;
Or on a half-reap’d furrow sound asleep,
Drows’d with the fume of poppies, while thy hook
Spares the next swath and all its twinéd flowers:
And sometimes like a gleaner thou dost keep
Steady thy laden head across a brook;
Or by a cyder-press, with patient look,
Thou watchest the last oozings hours by hours.

Where are the songs of Spring? Ay, where are they?
Think not of them, thou hast thy music too,—
While barréd clouds bloom the soft-dying day,
And touch the stubble-plains with rosy hue;
Then in a wailful choir the small gnats mourn
Among the river sallows, borne aloft
Or sinking as the light wind lives or dies;
And full-grown lambs loud bleat from hilly bourn;
Hedge-crickets sing; and now with treble soft
The red-breast whistles from a garden-croft;
And gathering swallows twitter in the skies.

I am carrying out some more research for features next month on Canon Frederick Oakeley, the author of the English version of ‘O Come all you faithful.’

Oakeley spent his childhood in the former Episcopal Palace in the Cathedral Close in Lichfield, and later was a canon of Lichfield Cathedral. But while there is a memorial to Oakeley’s father in the North Transept of Lichfield Cathedral, the only monument to the writer of one the all-time favourite Christmas carols is a street name in which his name is misspelled.

I went in search of Oakley Close at the weekend, and found myself in what can only be called the “Musicians’ Corner” of Lichfield.

Oakley Close has no street-sign of its own, and I might have been forgiven for missing it altogether. 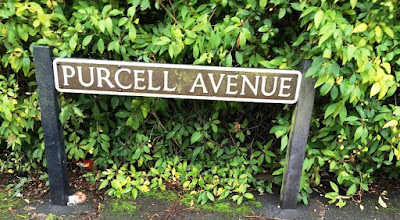 Purcell Avenue is a lengthy road on the north-east side of Lichfield. Perhaps it is named after Henry Purcell (1659-1695). He is considered to be one of the greatest English composers, and no other native-born English composer approached his fame until Sir Edward Elgar (1857-1934).

Appropriately then, one of the small streets off Purcell Avenue is Elgar Close, named after Edward Elgar.

At the entrance to Elgar Close, the sign reads: “Elgar Close, leading to Oakley Close and Pearce Court Flats.

I walked along Elgar Close, passed by Pearce Court Flats, but when I found myself in Oakley Close there was no sign or plaque recalling Lichfield’s great carol writer. Not only was his name misspelled at the entrance through Elgar Close, but it was forgotten by the time I had arrived in this small corner of Lichfield. 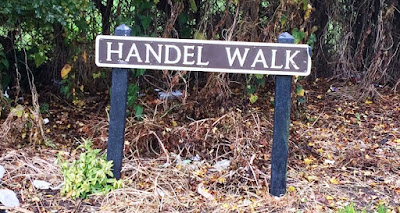 Behind Purcell Avenue, a walkway linking many of the houses is called Handel Walk, although I could find no houses that have Handel Walk as their address.

Despite being German-born, Georg Frideric Handel (1685-1759) is quintessentially English, with his coronation anthems, his choral works and his water music. But then, Dublin has a claim on Handel too. 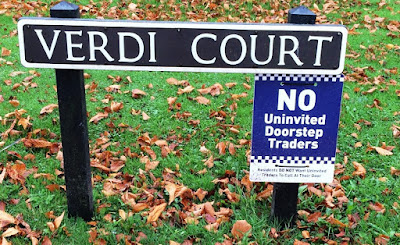 Close by is Verdi Court, recalling the Italian composer of operas, Giuseppe Verdi (1813-1901). In her first adult novel, The Road to Lichfield (1977), which was shortlisted for the Booker Prize, Penelope Lively has the character James Stanway asks Betty, who has developed a taste for opera that he has started to share: “I bow to your superior judgment, but I remain unconvinced that Carmen is a major work. What about Verdi, now? How do you feel about Verdi?” 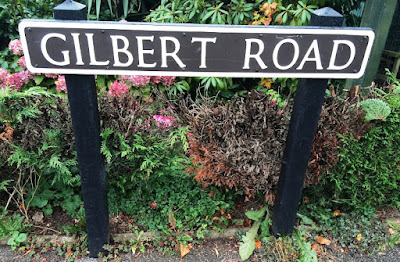 Lighter opera has its place in this area too, though, in the names of Gilbert Way, Sullivan Way and Sullivan Walk.

The librettist Sir William Gilbert (1836-1911) and the composer Arthur Sullivan (1842-1900), who was born to Irish parents, collaborated on 14 Victorian comic operas between 1871 and 1896, including HMS Pinafore, The Pirates of Penzance and The Mikado.

But Sullivan seems to have done better than Gilbert in Lichfield, with two places named after the composer and only one after the librettist. 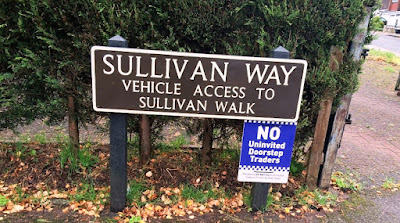 But two composers with Lichfield connections go without naming in this corner of Lichfield, Ralph Vaughan Williams (1872–1958) and Muzio Clementi (1752-1832).

Caroline Sarah Darwin, the maternal grandmother of Vaughan Williams, was the eldest sister of Charles Darwin and a grand-daughter of Erasmus Darwin, whose house near Lichfield Cathedral is one of the major visitor attractions.

In the 1830s, Clementi lived at Lyncroft House, on the north-west fringes of Lichfield. In his time, he was a celebrated composer, piano-maker, conductor and music publisher. Although much of his music is forgotten today, he was once considered second only to Joseph Haydn as a composer. He was a friend of Mozart and it is said he had a notable influence on Beethoven.

Today Lyncroft House is the Hedgehog, a restaurant and bar in the Vintage Inn chain and one of my favourite places to stay in Lichfield. It is just a short walk there from the musical corner of north-east Lichfield.