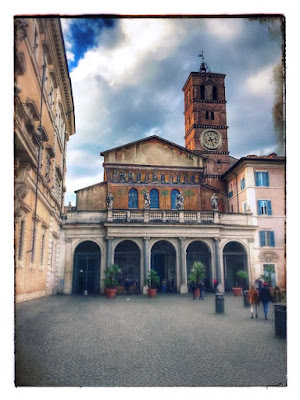 Santa Maria in Trastevere, in the very heart of Trastevere (Photograph: Patrick Comerford, 2017)

For many Irish people to Rome, an important church to visit is San Clemente, between the Coliseum and Saint John Lateran. This church, which I visited briefly on Wednesday evening, has been associated with the Irish Dominicans since 1677. In 1857, the Irish prior, Father Joseph Mullooly excavated the basilica and found a fourth century church, a temple of Mithras and a Roman house.

I am sure too that many Anglican visitors to Rome go out of their way to visit The Anglican Centre in the Palazzo Doria Pamphilj on Piazza del Collegio and All Saints’ Church on Via del Babuino, one of the two Anglican churches in Rome.

All Saints’ Church has many Irish connections too: the church was designed by George Edmund Street, who also redesigned Christ Church Cathedral, Dublin; the electric lighting was a gift in 1909 from Alfred Chenevix Trench, son of Archbishop Richard Chenevix Trench of Dublin; the Stations of the Cross commemorate the Revd Peter Marchant from Dublin, who was chaplain from 1991 to 1995; and other monuments recall Hugh Cairns, Earl Cairns, a leading politician from Cultra, Co Down, and Sir John Conroy, an Irish baronet who died in Rome in 1900.

Doubtless, everyone has a favourite church in Rome. But I thought this week it would be worth introducing six other churches that are among my favourites in Rome: 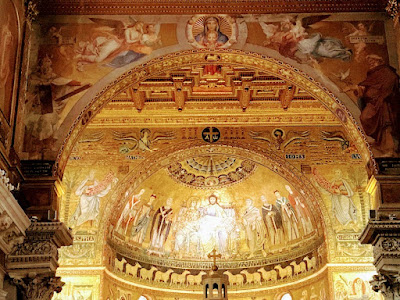 The mosaics in the apse of Santa Maria in Trastevere (Photograph: Patrick Comerford, 2017)

If Trastevere is every tourist’s favourite quarter of Rome, then the Basilica of Santa Maria in Trastevere is one of my favourite churches in Rome. This church is one of the oldest in Rome, it was the first one I visited during my stay in Rome last week, and later in the afternoon I had lunch by the walls of the church.

The area was made available to Christians by the Emperor Alexander Severus after he settled a dispute between the Christians and tavern owners, saying: ‘I prefer that it should belong to those who honour God, whatever be their form of worship.’

Pope Julius I (337-352) rebuilt the church on a larger scale in 340, when it became one of the original 25 parishes in Rome, and the basic floor plan and wall structures date back to that time.

The church was restored in the fifth century and again in the eighth century and it was rebuilt in 1140-1143. Pope Innocent II razed the church along with the recently completed tomb of his former rival, the Antipope Anacletus II, and arranged for his own burial on this spot.

The nave of the church preserves the plans of the original basilica and stands on the earlier foundations.

The lintel of the entrance door and the 22 granite columns with Ionic and Corinthian capitals that separate the nave from the aisles came from the ruins of the Baths of Caracalla or the nearby Temple of Isis on the nearby Hill of Janiculum.

Inside the church there is a number important mosaics from the late 13th-century by Pietro Cavallini illustrating the Life of the Virgin (1291), including a portrayal in the apse of the Coronation of the Virgin.

Domenichino’s octagonal ceiling painting, The Assumption of the Virgin (1617) is in the coffered ceiling he designed.

The Avila Chapel designed by Antonio Gherardi, and his Chapel of Sain Cecilia in San Carlo ai Catinari are two of the most architecturally inventive chapels of late 17th century in Rome.

In the dome, there is an opening or oculus from which four putti emerge carrying a central tempietto, all of which frames a light-filled chamber above, illuminated by windows not visible from below. 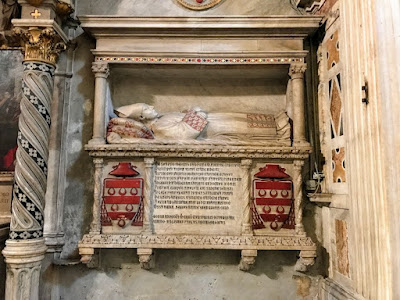 Here too is the tomb of Cardinal Pietro Stefaneschi, the last of his line, who died in 1417.

The façade of the church was restored in 1702 by Carlo Fontana, who replaced the ancient porch with a sloping tiled roof with the present classicizing one. The balustrade above includes statues of four popes.

Carlo Fontana also restored the octagonal fountain in front of the church in Piazza di Santa Maria in Trastevere, which is regarded as the heart of Trastevere.

The floor of the church was relaid in the 1870s and is a recreation of the Cosmatesque mosaic floor of the 13th century.

During restorations in the 19th century in the reign of Pope Pius IX, scholars identified the faces carved on their columns as those of Isis, Serapis and Harpocrates, and the offending faces were hammered off in a wilful act of defacing and destruction.

The past cardinal priests who have held the honorary titulus of Santa Maria in Trastevere have included Cardinal James Gibbons of Baltimore whose parents came from Co Mayo, Pope Leo XII, Cardinal Józef Glemp of Warsaw, and Cardinal Henry Benedict Stuart, whose coat of arms in the church is topped by a crown instead of a cardinal’s hat – Stuart royalists regarded him as the King Henry IX of England, the last Stuart pretender.

Today this is a friendly and welcoming church, with strong links to the local community and the Community of San’Egidio. The Piazza di Santa Maria in Trastevere is surrounded by bars and restaurants. 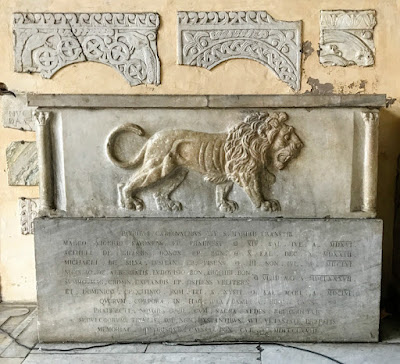 There are rich archaeological and historical artefacts in Santa Maria in Trastevere (Photograph: Patrick Comerford, 2017)