The first swim this year in
blue Mediterranean waters 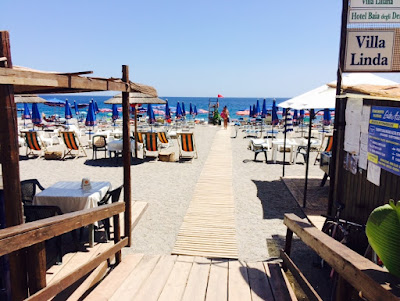 A morning on the beach in Recanati, west of Giardini Naxos (Photograph: Patrick Comerford, 2015)

I had my first swim this year in the Mediterranean this morning, swimming in the warm blue waters at the white beach of Lido Azzurro in Recanati, a little to the west of Giardini Naxos.

The beach in Recanati, the hotel area Giardini Naxos, is popular because of its fine sand. The beach extends for several kilometres, although part of the beach is rocky with small pebbly bays, and everywhere you can see the black volcanic rock from Mount Etna.

After a gap of a year, this is my first time back in Italy since 2013, and I am staying this week in the Villa Linda in Recanati. A late arrival last night left no time to explore this area. But I awoke this morning to the sound of swallows and a sea view from the balcony of my room.

Over the next few days hope to explore Giardini Naxos, which stands on the site of Naxos, the earliest Greek settlement in Sicily, and the lofty hill town of Taormina, which stands high above Giardini Naxos. In the background, Mount Etna can be seen clearly, and I have promised myself a morning there too.

Although few remains of the classical city of Naxos remain today, this was once an important centre of Greek civilisation and culture on the island of Sicily, and remained so until the Arab invasions of the Byzantine Empire.

Classical Naxos stood on a low but rocky headland, now called Cape Schisò, formed by an ancient stream of lava, immediately to the north of the Alcantara, one of the great gorges in Sicily. A small bay to the north separates in from the foot of the hill-top town of Taormina.

Later in the week, I plan to visit Syracuse and Neapolis, with their classical sites, the baroque town of Noto, and Mount Etna, the highest active volcano in Europe.

This evening, however, I hope to explore the streets of Taormina. There is going to be plenty of time this week also to go swimming again in Recanati, getting to know the wines and food of Sicily, and enjoying true Italian coffee.

Double espressos by the beach in Recanati (Photograph: Patrick Comerford, 2015)

Posted by Patrick Comerford at 16:07 No comments: