How do you respond when asked:
‘Do you also turn water into wine?’ 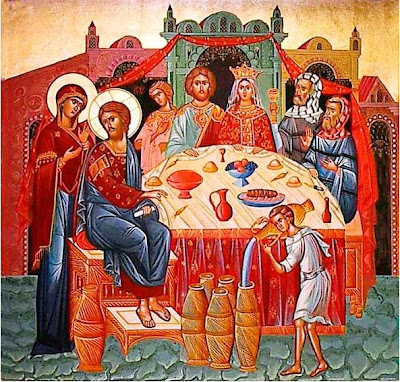 Tuesday [6 January 2015] was the Feast of the Epiphany. The Greek word ἐπιφάνεια (epipháneia) means “manifestation,” or “striking appearance.” It is an experience of sudden and striking realisation, and in classical drama and literature it often describes the visit of a god to earth.

Elsa Chaney once wrote (The Twelve Days of Christmas, Collegeville: The Liturgical Press, 1955) that Epiphany “is like a rich Oriental tapestry in which the various themes are woven and interwoven — now to be seen in their historical setting, again to be viewed from a different vantage point in their deep mystical significance.”

The great, significant Epiphany themes, narrated in the lectionary Gospel readings during these few days are:

● The Wedding at Cana (John 2: 1-11, a second service on 6 January, and the weekday A readings for 7 January, although not for any of the Sundays).

In each of these three events, Christ is manifest as God-incarnate at a point that marks the beginning of his ministry or his presence in the world. It is the moment when we are caught off guard as we realise that this seemingly helpless new-born child, or this one among many in the team of visitors to John the Baptist at the Jordan, or this anonymous guest among many at a provincial wedding, is in fact the omnipotent God, the King and Ruler of the universe.

Our celebrations of Epiphany mark the extension of Christ’s kingship to the whole world, not merely for a chosen few, but for all. During Advent, the world is in darkness, at Christmas the Light shines forth, and at Epiphany the Light bursts forth to all nations and the prophecy is fulfilled: “Nations shall come to your light, and kings to the brightness of your dawn” (Isaiah 60: 3).

But the Epiphany stories also have a built-in thread or reminder of return:

● The three kings return to their own country, albeit by another road, yet carrying to all they return to (see Matthew 2: 12).

● After the wedding at Cana, Jesus goes back to Capernaum with his mother, his brothers, and his disciples (see John 2: 12).

The story of the Wedding at Cana is not one of the Sunday lectionary readings this year, but it takes up the third of the great themes of Epiphany, the wedding feast or royal banquet. The wedding at Cana suggests Christ’s wedding with the Church.

[12 After this he went down to Capernaum with his mother, his brothers, and his disciples; and they remained there for a few days.]

What did God do on the Seventh Day in the account of creation in the Book Genesis? God rested. And now that we have are at Day Seven in the opening week of Saint John’s Gospel, we come to the Day that Christ rests with his disciples, and to a foretaste of the Heavenly Banquet, which is the completion of God’s creation. “Blessed are those who are invited to the marriage supper of the Lamb” (Revelation 19: 9).

Seven has a symbolic meaning or significance in this Gospel. This is the first of the seven miraculous signs by which Saint John attests to Christ’s divine status. This Gospel is structured around these signs, and the word used by John is unique. He uses the Greek word σημεῖον (semeion, “sign” or ἔργον, ergon meaning “work”), instead of the term the Synoptic writers normally use for miracle, δύναμις (dynamis, meaning act of power).

This is the first of the Seven Signs, which are:

These are completed then by the Greatest Sign, the Resurrection (see 2: 18-22).

In addition, there are Seven Witnesses:

Some of us have probably been jocularly approached by drunks at weddings or in pubs who think it is witty to ask: “Dou you turn water into wine too?”

Do you find it an embarrassing miracle story that is difficult to provide with meaning to drunks who think, in the way that only drunks can think, that they are being humorous or, even worse, perfectly logical and rational?

So here are seven thoughts or questions I have on this story:

1, This story illustrates how someone transformed from a worldly way of life to a heavenly way of life, to receive the gift of earthly life.

2, The jars of water for cleaning the utensils are empty, but the meal has not yet finished. Who is going to do the washing up and how is it going to be done? Could the old water in the five jars represent the teaching in Torah that has served its purpose but has run out, so that it is replaced by the teaching of Christ, who is the living water?

3, Who is given a new start at the wedding? Those who receive and drink this new wine receive what Jesus gives, and do what he wants them to do. Can there be any new life in Christ without Discipleship?

4, Who is saved from embarrassment, has benefitted from face-saving in this story? The host at the wedding? The chief steward? The servants? The Virgin Mary? The couple getting married? In this story, Jesus the guest becomes Jesus the host – what is the sacramental parallel of this?

5, Who are the members of the family at this wedding in Cana?

The end of the story

I have long wondered why the lectionary provisions for this Gospel reading (John 2: 1-11) end at verse 11, and do not include verse 12. The gifts that Christ brings to the wedding at Cana are overshadowed by the generous outpouring of wine that allows the wedding to continue, just as the story of his Baptism by John in the Jordan is overshadowed by the Holy Spirit who hovers over the waters as a reminder of a new creation.

But the other miracle at Cana is the formation of new families. Someone becomes a new father-in-law, a new sister-in-law, eventually a new grandmother, a new uncle.

The fruit of the vine becomes the wine; the fruit of the wedding is a new family. The new family in the banquet with Christ though is that family that comes to live with him in verse 12 – not just his mother and brothers, but his disciples too.

We become a new and renewed family around the table at the banquet, and it is imperative for us to reflect this in our celebrations of the Eucharist here and elsewhere.

Canon Patrick Comerford is lecturer in Anglicanism and Liturgy, the Church of Ireland Theological Institute. This reflection was prepared for a faculty meeting on 8 January 2015.