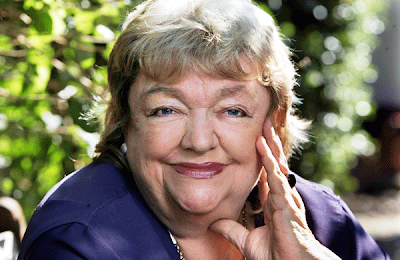 Two colleagues, two funerals, all in the space of two days.

On Thursday, it was the funeral of the Revd Derek Sargent, Rector of Clontarf, in the Church of Saint John the Baptist, Clontarf.

This morning [Friday 3 August 2012], it was the funeral of Maeve Binchy, writer and journalist, in the Church of the Assumption, Dalkey.

I arrived at 10.30, an hour before Maeve’s funeral Mass began, and the church was filled to capacity within minutes. People were standing at the sides and at the back, an overflow congregation filled the nearby Town Hall too, and hundreds were left outside in the rain, listening to the funeral on speakers.

As one local person said outside, “Even the sky is crying.”

For many years I worked closely with Maeve Binchy, while she was working in the London Office of The Irish Times and I was working on the Foreign Desk. Later we both contributed short stories to True to Type, a collection of short stories compiled by Fergus Brogan as a tribute to our colleague, the Revd Stephen Hilliard, who was murdered in 1990.

This morning I sat beside my former Foreign Desk colleague, Paddy Smyth, and trade unionists Roisin Callender and Des Geraghty. Throughout the church were Maeve’s colleagues from the worlds of journalism, the arts and literature, and her neighbours, the people of Dalkey.

The Mass was short and simple, according to Maeve’s wishes, and there was no eulogy. The only flowers was a large arrangement of roses on her coffin called Rosa Gordon Snell, which she had named after her husband as a gift.

In one of the best funeral sermons I have ever heard preached, Father William Stuart concentrated on Resurrection faith. The church was filled with laughter when recalled how Maeve once made a generous donation to the church, but warned that it must not be spent on statues and holy pictures.

He conceded that Maeve was not a religious person in a traditional sense, and died not having come to know God. But he suspected that once she got her bearings in heaven, she began to talk to the Almighty. “And she’s still talking to the Almighty, and she’ll go on talking to the Almighty for a very long time,” he joked. “Lord you called her, you can listen to her," he added, to loud applause.

Outside in the rain, the streets of Dalkey were lined with several hundred people waiting to applaud as Maeve’s coffin was driven by.

Posted by Patrick Comerford at 18:49 3 comments: