The unusual stories of the Leslie family 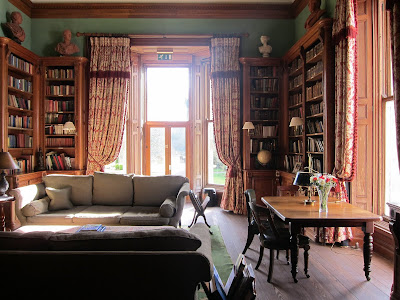 The Library at Castle Leslie ... the story of the Leslie family is a colourful story that spans all aspects of Irish life (Photograph: Kerry Stronger Byrne)

I am staying for two nights at Castle Leslie, on the edges of the village of Glaslough in Co Monaghan. The colourful history of the Castle Leslie Estate is a story that is bedecked with politics, royalty and war, with a family that includes much-married bishops, exiled opponents of William of Orange, a woman said to be the granddaughter of George IV and his mistress, cousins of Winston Churchill, prisoners-of-war, and eccentrics who believe we are about to be invaded by flying saucers and UFOs.

The Leslie family has lived on the estate at Glaslough, since 1665, having bought the land with a £2,000 reward given to Bishop John Leslie by King Charles II, and for many generations this strong Church of Ireland family owned Lough Derg and the popular Roman Catholic pilgrimage destination known as Saint Patrick’s Purgatory. The Leslie family included warlike bishops, politicians, social reformers, agricultural innovators, philanthropic women, pre-Raphaelite painters, furniture collectors, writers and war heroes, and they all claimed to trace their ancestry back to Attila the Hun.

The first Leslie to come to Ireland was Bishop John Leslie who was Bishop of the Isles in Scotland. He moved to Ireland in June 1633 when he became Bishop of Raphoe, and he built Raphoe Castle in Co Donegal.

At the age of 67, Bishop Leslie married Catherine Cunningham, the teenage daughter of the Dean of Raphoe, and they had five children, two of whom lived to adulthood. Bishop Leslie was known as the “fighting bishop” and defeated Cromwell’s forces at the Battle of Raphoe. At the restoration of Charles II in 1660, the bishop, then aged 90, rode from Chester to London in 24 hours. As a reward for his loyalty, Charles II granted him £2,000. In 1665, Glaslough Castle and demesne was sold by Sir Thomas Ridgeway to John Leslie, by then Bishop of Clogher.

When John Leslie died at the age of 100 in 1671, he was reputed to be the oldest bishop in the world. His death marked the end of the links that bridged the Jacobite or even the Elizabethan Church with the Church of the Caroline restoration.

His son John, who was then aged 26 and inherited the estate, was Dean of Dromore. He never married, and his brother, Canon Charles Leslie, who succeeded him at the age of 71, only enjoyed the estate for a few short months and died the following year.

Canon Charles Leslie (1650-1722) was a leading theologian among the Nonjurors. Oliver Goldsmith said he was an arguer of some wit; Dr Samuel Johnson said “he was a reasoner not to be reasoned with.”

As a Nonjuror, Charles Leslie opposed the accession of William III after the defeat of James II at the Boyne. He was Chancellor of Connor Cathedral before fleeing to France, where he was a member of the Jacobite court. At the end of his days, George I pardoned him, saying: “Let the old man go home to Glaslough to die.”

Charles Leslie had three children – Robert, Henry and “Vinegar” Jane. Henry and Robert were friends of Dean Swift, who was a regular visitor to Castle Leslie. Swift wrote many verses about the Leslies, not all of them complimentary:

Robin to a beggar with curse
Will throw the last shilling in his purse
But when the coachman comes for pay
That rogue must wait another day.

With rows and rows of books upon the shelves
Written by the Leslies
All about themselves. 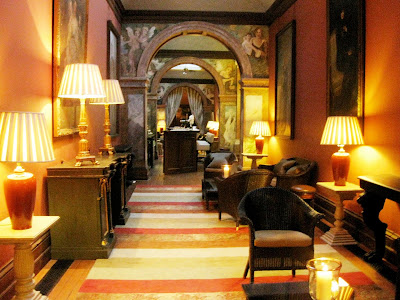 Charles Powell Leslie I, who inherited the estate in 1743, improved farming methods in the district, was MP for Hillsborough (1771) and Monaghan (1776), and in 1779 became active in the Volunteer Movement as colonel of the Trough Volunteers. In 1783, Grattan’s Parliament was established thanks to pressure from 80,000 Volunteers. In his election speech that year, Charles Leslie declared: “'I desire a more equal representation of the people and a tax upon our Absentee Landlords.”

Charles Powell Leslie’s brother-in-law, Lord Mornington, was the father of the Duke of Wellington. But Charles died before Wellington’s defeat of Napoleon at Waterloo. He was one of the few landlords to refuse Castlereagh’s offer of a peerage in return for voting for the Act of Union. He died in August 1800.

His younger sons included John Leslie (1772-1854), Bishop of Dromore and later Kilmore, Elphon and Ardagh, and Canon Edward Leslie (1792-1865), Treasurer of Dromore Cathedral. But the estate passed to the eldest son, Charles II Powell Leslie, a keen amateur architect who designed many the present farm buildings at Castle Leslie and the fairy tale gate lodge that looks down the lake to the castle.

Charles Powell Leslie III (1821-1871) loved big house parties and wanted to entertain on a grand scale. His taste in architecture has been described as an eclectic mix of “Free-Range Gothic,” “Early Taj Mahal,” “Late Rothschild,” “Bahnhof Baroque” and “Jacobean Bloody,” Some of his plans for Glaslough included a cut-price copy of the Chateau de Chambord in Framce, that would have been six times larger than the present Castle Leslie, and a nine-storey gothic tower in the middle of the lake, reached by Venetian gondolas. 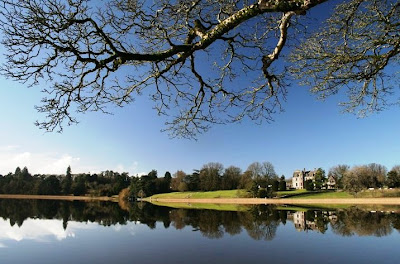 This Charles Powell Leslie completed a number of successful building projects, including the grain merchant store in Glaslough and the entrance lodges at the main gates to the castle. Sadly for Charles – but fortunately for the Leslie family finances – he choked on a fish bone before he could realise any of his major architectural fantasies. He died unmarried in 1871 and the castle building project was left to his brother, Sir John Leslie (1822-1916), the first baronet and a painter of the Pre-Raphaelite school.

Sir John Leslie built Castle Leslie at the insistence of his young wife Constance. Lady Constance Damer was the daughter of Mary Georgiana Emma (‘Minnie’) Seymour (1798-1848), who was allegedly a daughter of George IV and his mistress, Mrs Maria Fitzherbert.

In 1910, the Leslies moved to Manchester Square in London, where he died in 1916. Soon afterwards, the family finances took a nosedive when the Leslies invested their compensation money from the Wyndham Land Acts in Russian Railway Bonds. They were advised by Queen Mary’s financial adviser, Sir Ernest Cassell, and bought the bonds in 1917, immediately before the Russian Revolution.

The title passed to their only son, Sir John Leslie, 2nd Baronet. In 1884, he had married Leonie Jerome, a younger sister of Jenny Jerome, who married Lord Randolph Churchill – the parents of Sir Winston Churchill. The Churchills considered the Leslies their poor relations, and there are many Churchill “hand-me-downs” in Castle Leslie. Leonie died in 1943, and Sir John died in 1944.

Sir Shane Leslie (1885-1971), 3rd Baronet, was an author, poet and nationalist. He was educated at Eton and Cambridge, and while he was at King’s College he became a Roman Catholic and a supporter of Home Rule. He stood as a Nationalist candidate in Derry in 1910, losing by a mere 59 votes to the Duke of Abercorn.

He resisted family pressures to send his own sons to Eton, and instead sent them to English Benedictine schools – Jack to Downside and Desmond to Ampleforth. He Shane handed over Saint Patrick’s Purgatory on Lough Derg – which had been in the hands of the Leslie family for generations – to the Roman Catholic Bishop of Clogher, and transferred Castle Leslie to his eldest son, John Norman Leslie who later became the fourth baronet as Sir Jack Leslie.

Sir Jack was educated at Downside and Magdalene College, Cambridge. During World War II, he was a prisoner of war for five years, which brought about his ill-health. He transferred the estate to his sister Anita, and for the next 40 years lived in Rome until he returned home to Castle Leslie in 1994.

Anita Leslie-King, in turn, transferred Castle Leslie and Glaslough to her younger brother, Desmond Leslie. He was a war-time Spitfire pilots, an author and a composer of electronic music, as well as having an unusual interest in UFOs and flying saucers. In 1991, he handed the estate over to his five children and Castle Leslie is now run by his daughter, Samantha Leslie.

When Sammy Leslie took over the estate from her father, she recognised it as a commercially viable opportunity that would not only ensure the future safe-keeping of the estate and its history but also prompt its regeneration. And so Castle Leslie has been transformed into the country house hotel where I am enjoying two days of isolated luxury.

Posted by Patrick Comerford at 12:30 3 comments: