Watching horses on the beach and finding secret waterfalls

Two horses on the beach at Loughshinny this morning (Photograph: Patrick Comerford, 2011)

I was back in the coastal towns and harbours of Fingal in north Co Dublin today, unexpectedly and surprisingly, but delightedly.

An early morning commitment brought me to Rush, and from there I travelled north to the tiny fishing harbour of Loughshinny, where two of us spent an hour or more walking the shoreline, along the fascinating geological rock formations and through the tiny streets, lined with white-washed, thatched cottages and some impressive modern villas. 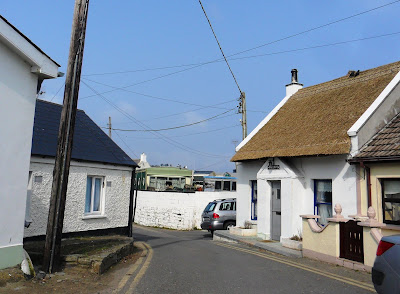 But we also strolled on through Loughshinny’s Millennium Walk, past the murder site, where the Revd Anthony Tanner was murdered 270 years ago. The Vicar of Holmpatrick was hit by a stone on the temple as he was crossing a style and was felled. The boy accompanying him ran off to find help and returned with some neighbours to found Tanner lying senseless, his skull smashed in two places and his arm broken. He died four days later on Thursday 7 May 1741.

From there, we turned north, and were soon walking through rolling countryside, where tractors were working hard in the fields and horses grazing calmly close to the site of the former copper mines, which operated from 1760 to 1845. The road was rising gently, and we could see back down to the strand and the harbour at Loughshinny below us, with the sun glistering across the gentle waters.

Horses grazing on the site of the old copper mines in Loughshinny (Photograph: Patrick Comerford, 2011)

We soon reached the farmhouse that stands on the site of Tanner’s house. The original house was demolished in the early 1940s to make way for the present day farmhouse but many of the outbuildings, including the remains of an old pigeon house, date from earlier centuries.

The farmhouse on the site where the Revd Anthony Tanner lived in the mid-18th century (Photograph: Patrick Comerford, 2011)

The Revd Anthony Tanner, who was the Vicar of Holmpatrick and Balscadden, owned most of the land around Loughshinny in the early 18th century. In 1740, he married Alice Cannon from nearby Popeshall.

On the night he was attacked, 3 May 1741, Tanner was returning home to Lougshinny having dined with his friend, Sir Robert Echlin of Kenure House. Later, his younger brother, William Tanner, was accused of employing a poor fisherman, James Cappoque, to carry out the murder in the hope of inheriting the lands at Loughshinny. 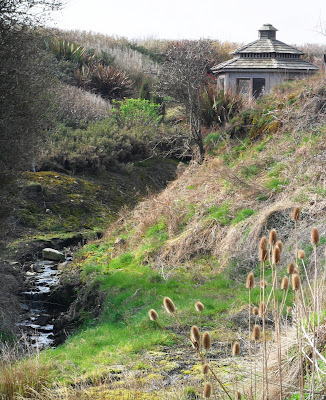 The voice of the hidden waterfall ... above the beach at Loughshiny (Photograph: Patrick Comerford, 2011)

We strolled on as far as Popehall, before turning round and strolling back down to Loughshinny for a walk along the beach, where two horses were taking a leisurely canter. We climbed up by a hidden waterfall, and I was reminded of TS Eliot’s lines in Little Gidding:

We shall not cease from exploration
And the end of all our exploring
Will be to arrive where we started
And know the place for the first time.
Through the unknown, unremembered gate
When the last of earth left to discover
Is that which was the beginning;
At the source of the longest river
The voice of the hidden waterfall
And the children in the apple-tree
Not known, because not looked for
But heard, half-heard, in the stillness
Between two waves of the sea.

In all, three historical walks have been mapped out in Loughshinny, and we promised to return to learn more in the summer months.

In Skerries, three of us had lunch in Stoop Your Head, looking out onto the Harbour, before returning to Rush for coffee in The Thatch, which has all the charm and character of an English teashop.

After another stroll along the harbour in the harbour and the shoreline in Rush, I headed home in time to watch the boat race.

The Cambridge cox, Liz Box, is reading theology at Hughes Hall, and is a former undergraduate at Christ’s, where I have stayed and preached. I was sorry to see Cambridge lose, but otherwise it had been another perfect day.
Posted by Patrick Comerford at 17:17 1 comment: