Why are German products being
packaged to look like Greek food? 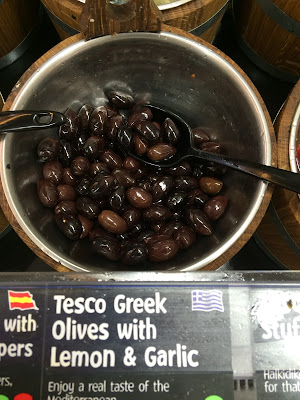 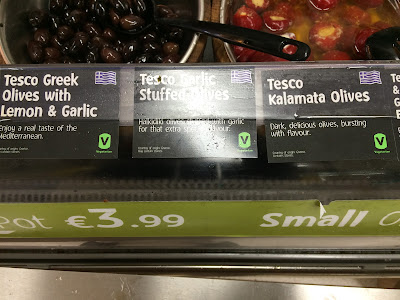 After some inquiries on social media during the week about where real Greek food could be bought in my area, I decided this evening to check out what Greek products were available in my local Tesco supermarket in Rathfarnham Shopping Centre.

I was surprised there was no Greek-sourced olive oil on the shelves, no Greek wine in the wine department, and no ouzo or Metaxa brandy alongside the spirits.

But at the deli counter I found Greek olives with lemon and garlic, Kalamata olives, and Halkidiki olives stuffed with garlic.

Greek yoghurt on the shelves in Rathfarnham (Photographs: Patrick Comerford, 2015)

On the dairy shelves there was a good selection of Fage Greek yoghurt, both the original style and fruit flavoured. But the Müller yogurt nearby was labelled “Greek-style” with a UK address. Like most Müller products, it was probably made in Germany. If it was made in Greece there would have been no need to label it “Greek-style” – it simply could have been called Greek.

Müller products have similar packaging to Fage, but the ingredients include milk protein concentrate, modified food starch and gelatine. These additives make it high in protein like real Greek yoghurt and the gelatine and starch help to thicken this product. But it is not real yoghurt, and it is not Greek … indeed, with all those additives, calling it “Greek-style” stretches the imagination.

On the other hand, Fage contains only milk and yoghurt cultures.

Is Müller trying to capitalise on Fage’s branding and success? German success at the expense of Greece seems cruel at the moment. 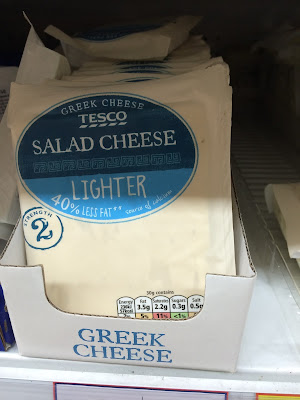 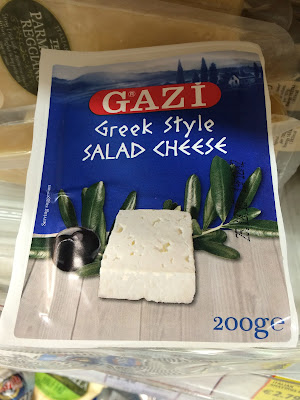 Greek-made feta (above) and German cheese (below) … but this is not from Gazi in Athens or Gazi in Crete (Photographs: Patrick Comerford, 2015)

The Greek Feta was Tesco’s own branded and labelled cheese, and was made in Greece. However, the Gazi-branded “Greek-Style Salad Cheese” was packaged to look Greek, with Mediterranean, Greek-looking blue-and-white packaging and images, and a fruiting olive branch in the background.

But it is not made in Gazi in Athens, or in Gazi which is 6 km west of Iraklion in Crete – like Müller brands, it is made in Germany.

The villages in the Gazi municipality in Crete include Fodele, the birthplace of the artist El Greco. But it takes some artistic creativity to package this “Greek-style” cheese so unwary customers think they are buying Greek. Surely the Germans are trying to squeeze enough out of Greece without also needing to pirate its yoghurt, its cheese, its olives and its images. 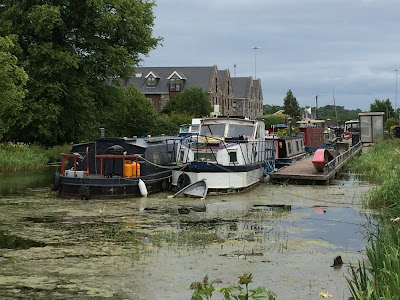 Barges and boathouses at Castleknock Marina and the Twlfth Lock (Photograph: Patrick Comerford, 2015)

Earlier in the afternoon, two of us were heading out for a late coffee at the Boathouse in Farmleigh in the Phoenix Park, when we took an unexpected route across the bridges over the Royal Canal and the railway line at Castleknock and spotted the barges and boathouses moored the Twelfth Lock.

Castleknock Marina looked appealing, with the swans and signets expecting to be fed by passers-by. The barges and boathouses looked pretty in the afternoon summer sunshine.

But the reality is that some of the barges moored at the marina are home to people who have been squeezed out of the housing market in Dublin by Ireland’s own brand of austerity. Let no-one in Greece imagine that the Irish economy is a model for Greek economic hopes and aspirations.

Beside the marina, the Twelfth Lock hotel and bar describes itself as a pioneering example of European café and hotel culture in Ireland, inspired by the hotels, cafés and bars of Paris and Amsterdam, in a cosmopolitan space in the unique environment at Castleknock Marina on the banks of the Royal Canal.

This hotel won the “Best New Hotel In Ireland” at the AM:PM National Hospitality Awards in 2004 and the “Best Presented Hotel and Surrounds” for two years in a row in 2004 and 2005 at the Fingal County Council Cleaner Communities Awards.

On the other bank of the canal stand apartment blocks that had once been the Blanchardstown Mills. 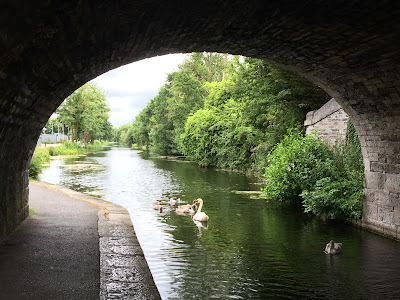 Swans under the bridge over the Royal Canal at Castleknock this afternoon (Photograph: Patrick Comerford, 2015)

We walked between the railway line and the canal, and found ourselves crossing the M50 motorway and the Wonderful O of the junction, with the Royal Canal crossing in the middle. Until today, I had only passed under the canal at this junction.

Work on the Royal Canal began in 1790 and took 27 years before finally reaching the River Shannon in 1817, at a total cost of £1,421,954. From Castleknock, the canal continues on through Maynooth, Kilcock, Enfield, Mullingar and Ballymahon, with a spur to Longford. The total length of the main navigation is 145 km and there are 46 locks along the length of the canal.

The Royal Canal Way is a 144 km long-distance trail that follows the towpath of the canal from Ashtown in Dublin to Cloondara, Co Longford. It is said to take three days to complete the walk. It is designated as a National Waymarked Trail by the National Trails Office of the Irish Sports Council and is managed by Waterways Ireland.

We eventually got to Farmleigh where we had double espressos at the Boathouse. It was a healthy afternoon, full of healthy exercise and pleasant surprises. 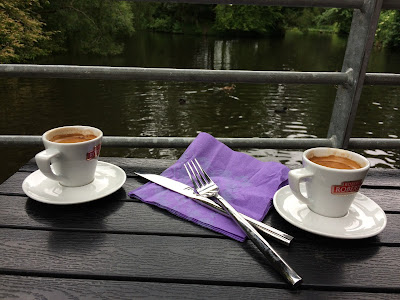 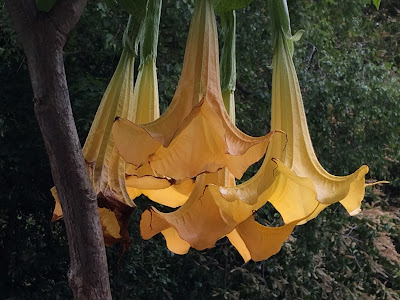 Posted by Patrick Comerford at 21:46 No comments:

Solidarity with Greeks (3):
returning to the Classics 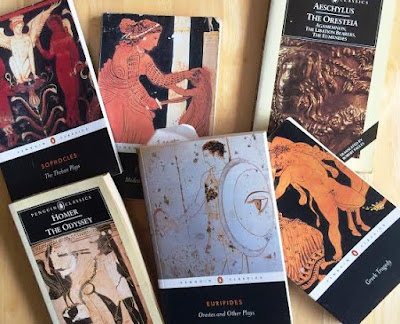 Returning to the classics … the foundation of European literature (Photograph: Patrick Comerford, 2015)

While the present Greek crisis continues, I have decided each morning to suggest Tiny, Tickable, Achievable Targets as ways of expressing support for Greece and Greeks in the present crisis.

On Thursday [9 July 2015], I posted a photograph on Facebook of my breakfast, with real Greek yoghurt – not Greek-style yoghurt – and Greek honey. I captioned the photograph: “Breakfast with Greek honey and Greek yoghurt, not Greek-style yoghurt. Buying Greek products helps Greek exports, puts money from euro economies back into Greece, keeps Greek workers in jobs. A small but simple start to the day. Good Morning.”

Then on Friday morning [10 July 2015] I suggested picking a Greek football team to support as a gesture of solidarity.

These gestures may not change the agenda in Brussels, but you can make yourself and your family and friends feel more positive about Greece, and show solidarity in a humane way.

Classical Greece laid the foundations for European civilisation ... artefacts on display in the Fortezza in Rethymnon on the island of Crete (Photograph: Patrick Comerford)

This morning, as a weekend pleasure, I am suggesting returning to the classics and reading or re-reading some of the great foundational works of European civilisation.

Thomas Gaisford (1779-1855), the English classical scholar and Anglican theologian who was Dean of Christ Church, Oxford (1831-1855), said in a Christmas sermon: “Nor can I do better, in conclusion, than impress upon you the study of Greek literature, which not only elevates above the vulgar herd but leads not infrequently to positions of considerable emolument.”

Classical Greece gave us democracy, theatre, drama, tragedy, the foundations of our poetry and literature, the chorus and the muses. The Greeks gave us the wisdom, philosophy and logic of Plato, Aristotle and Socrates. They gave use Euclidean and Pythagorean mathematics, Hippocratic medicine, and the principles of architecture. And they gave us the Olympic games and the gymnasium.

Twenty years ago, in Greek as a Treat: An Introduction to the Classics (BBC/Penguin, 1995), Peter France rediscovered the people who for centuries were regarded as knowing best how to live.

The title of his book comes from Sir Winston Churchill, who once said: “I would make them all learn English: and then I would let the clever ones learn Latin as an honour, and Greek as a treat.”

In art, science, medicine, politics, philosophy, sport, drama and history, the Greeks invented new ideas and set standards of beauty and excellence that have influenced and inspired the world and that in many cases have never been surpassed.

It seems, however, that some of bankers and politicians in northern Europe today know only how to exercise autocracy or plutocracy or are aware only of their own concepts of Spartan lifestyles that they seem to want to impose on the people of Greece today.