Hoping for a week of sunshine 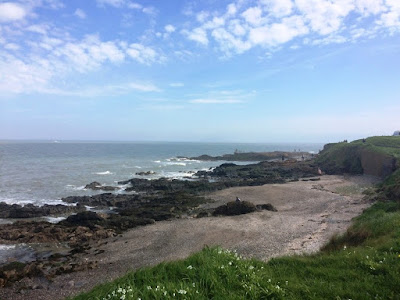 Walking on a small cove below the walk between Malahide and Portmarnock (Photograph: Patrick Comerford, 2016)

The hoped-for sunshine eventually arrived yesterday afternoon [8 May 2016]. Earlier in the day, I was back in Christ Church Cathedral, Dublin, and served as sub-deacon at the Choral Eucharist, welcoming people at the cathedral door and assisting at the administration of Holy Communion.

Later, during coffee in the crypt, two of us were told that the rhododendrons were coming into bloom in Howth and were worth visiting. We headed out towards Howth, but the traffic was crawling at a snail’s pace from Clontarf.

At the Bull Wall and Dollymount, a number of sailors were out in small boats, and two crews were rowing, perhaps in preparation for the sea-rowing season.

But the traffic was still crawling, and many drivers were doing U-turns and giving up on their efforts to get to Howth. By the time we got near Sutton, we decided to turn off towards Baldoyle, and decided to take the road to Malahide.

At Malahide, we had lunch in the Gourmet restaurant near Robswall, and by the time we had finished lunch the sun was breaking through and the temperature was beginning to reach 20.

I still have a heavy cough and so our walk was short and crisp on the beach on one of the pebble coves below the path between Malahide and Portmarnock. The cliff walk above helped to create a suntrap below, but there was a hazy mist blocking the view across the estuary towards Donabate and Portrane to the north.

Later in the evening, back in Knocklyon, the clouds burst in a heavy thunderstorm. Perhaps that is going to clear the atmosphere for a week of sunshine.