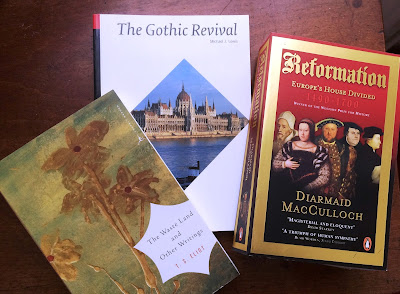 Three new books for my shelves … including one to read on Saturday’s flights (Photograph: Patrick Comerford, 2015)

I spent an hour queueing in my GP’s practice last night for a much needed B12 injection and a consultation about my sarcoidosis. The wait was worth it, and my GP is beyond praise for his attention and wisdom.

This all came after a busy day, tidying up and completing exam marks for the Mater Dei Institute of Education, where I am a Visiting Lecturer in Anglican Studies.

Mater Dei Institute is a College of Dublin City University (DCU), situated in the heart of Drumcondra in Dublin. But it may soon be moving from its present campus on Clonliffe Road to either a site at Saint Patrick’s College, Drumcondra, or the DCU campus in Glasnevin.

Mater Dei Institute, Saint Patrick’s College, Drumcondra, and the Church of Ireland College of Education (CICE) are being brought together within Dublin City University. An important milestone in this process takes place next September (2015), when all incoming students to Mater Dei will register as DCU students.

The new Institute of Education will be DCU’s fifth faculty and the incorporation will enable a greatly enhanced Faculty of Humanities and Social Sciences.

I am not sure yet whether I am going to be teaching in the Glasnevin or the Drumcondra campus, but it is a pleasure to have been invited back again as a visiting lecturer for the coming academic year. 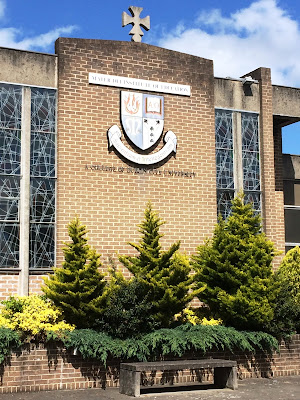 Mater Dei Institute for Education … on the move in September (Photograph: Patrick Comerford, 2015)

Between visiting Mater Dei and visiting my GP, I spent a little time browsing and rummaging in the bookshops in Dublin city centre, and came away with three books.

The Gothic Revival by Michael J Lewis (London: Thames & Hudson, 2002) was published as part of the World of Art series. The author is a Professor in the Department of Art at Williams College, Massachusetts, where he has taught American art and architecture at Williams College since 1993.

The fashion for Gothic Revival architecture spread throughout continental Europe and the US from the 18th century, and shaped the face of Victorian England and Ireland. It soon outgrew its religious and historical beginnings and was adopted in many countries to serve political or nationalist purposes.

AWN Pugin and Charles Barry were two of the many great architectural talents of the 19th century. They developed the Gothic Revival and are associated with many of England’s best-known buildings, particularly the Houses of Parliament.

But this book pays little or no attention to Pugin’s work in Ireland, which includes Saint Mary’s Cathedral, Killarney, Saint Aidan’s Cathedral, Wexford, Saint Peter’s College, Wexford, much of Saint Patrick’s College, Maynooth, as well as churches dotted throughout the landscape of Co Wexford.

Nor, apart from a rich description of his work at Saint Giles’s, Cheadle, is there much discussion of Pugin’s work throughout England, especially Alton Towers and the patronage of the Talbot family which was the catalyst for changing the ecclesiastical landscape of Staffordshire and Wexford in the 19th century.

Pugin once described Saint Giles’s as “Perfect Cheadle, my consolation in all my afflictions.” However, I was amused to read the quotation from Pugin that introduces the chapter on his work: “There is nothing that is worth living for but Christian architecture and a boat.”

Professor Lewis argues that the Gothic style demonstrates energetically the confrontation of Western architecture with modernity, applying the inspiration of the mediaeval cathedral builders to the new engineering ideas of the industrial age. His rich survey treats individual buildings and broad movements in England, Europe and the US with fresh authority, and he provides an invaluable introduction to a fascinating and colourful period in the history of architecture.

‘There is nothing that is worth living for but Christian architecture and a boat’ (AWN Pugin) … punting on the Backs behind King’s College, Cambridge (Photograph: Patrick Comerford)

This year marks the 50th anniversary of the death of TS Eliot in 1965, and so far this year I have given a number of lectures, written some papers, and even been inspired in my preaching by Eliot.

The Waste Land and Other Writings (New York: Modern Library Classics, 2002), is a collection of writings by TS Eliot. I have bought this to read the introduction by the American poet and essayist Mary Karr, ‘How to Read “The Waste Land” So It Alters Your Soul Rather Than Just Addling Your Head.’

‘The Waste Land’ is Eliot’s masterpiece, and one of the greatest poetic achievements of the 20th century, describing his pilgrimage of spiritual and psychological torment and redemption. In her introduction, Mary Karr sets out to dispel some of the myths about this poem’s inaccessibility and she sheds fresh light on the ways in which ‘The Waste Land’ illuminates contemporary experience.

Eliot’s criticism was almost as influential as his poetry, and this collection includes a valuable selection of some of his most important essays.

Diarmaid MacCulloch is Professor of the History of the Church at Oxford University, and is regarded as the pre-eminent scholar and historian of our time on the Reformation and Counter-Reformation in European history. His biography of Thomas Cranmer: A Life (1996) won the Whitbread Biography Prize, the James Tait Black Prize and the Duff Cooper Prize. He is also the author of A History of Christianity: The First Three Thousand Years.

This history of the Reformation received the British Academy Book Prize in 2004 and the Wolfson Prize for History. Here Diarmaid MacCulloch sets out to chart a seismic shift in European culture that tore the western world apart and marked the beginning of the modern world.

He re-creates the religious battles of priests, monarchs, scholars and politicians, from the Martin Luther nailing his Theses to the door of the church in Wittenburg to the radical Ignatius of Loyola, founder of the Jesuits, from Archbishop Thomas Cranmer of Canterbury, martyred for his reforms, to the ambitious Philip II of Spain, unwavering in his campaign against Europe’s “heretics.”

He weaves together the many strands of the Reformation and the Counter-Reformation, ranging widely across Europe and even to the new world, and reveals how these upheavals affected everyday lives – overturning ideas of love, sex, death and the supernatural, and shaping the modern age.

Blair Worden wrote in the Sunday Telegraph: “From politics to witchcraft, from the liturgy to sex; the sweep of European history covered here is breathtakingly panoramic. This is a model work of history.”

James Boswell, in his biography of Dr Johnson, recalls how the saintly Lichfield writer once advised him “to have as many books about me as I could; that I might read upon any subject upon which I had a desire for instruction at the time.”

Johnson told Boswell "What you have read then you will remember; but if you have not a book immediately ready, and the subject moulds in your mind, it is a chance if you again have a desire to study it.” He added: “If a man never has an eager desire for instruction, he should prescribe a task for himself. But it is better if a man reads from immediate inclination.”

My B12 injection was much needed in advance of my return flight to Birmingham and visit to Lichfield on Saturday [30 May 2015]. Now I am well stocked up with B12 level and with reading material, and I plan to take Mary Karr’s introduction to ‘The Waste Land’ with me to read on the flights at the weekend.