The new Cross of Sacrifice at Glasnevin Cemetery, dedicated today by President Michael D Higgins and the Duke of Kent (Photograph: Patrick Comerford, 2014)

I was a guest of John Green, chair of the Glasnevin Trust, this afternoon [31 July 2014] when President Michael D Higgins and the Duke of Kent dedicated the Cross of Sacrifice at Glasnevin Cemetery, Dublin.

This new war memorial is a joint project of the Glasnevin Trust and the Commonwealth War Graves Commission, of which the Duke of Kent is president. It has been erected with the support of the Irish Government and today’s ceremony marks a further step in the normalising of Ireland’s acknowledgement of the war dead.

Until today, the Republic of Ireland was the only country in the world not to have a Cross of Sacrifice in cemeteries containing the bodies of 40 or more military personnel who died while with British or other Commonwealth forces during either World War I or World War II. 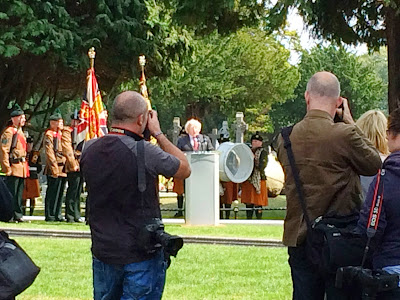 In his speech, President Higgins said that World War I remains “somewhat of a mystery” a century on. “If all wars are an object of infinite sadness, this particular one also remains as an inextinguishable source of bewilderment.”

He said: “We cannot give back their lives to the dead, nor whole bodies to those who were wounded, or repair the grief, undo the disrespect that was sometimes shown to those who fought or their families. But we honour them all now, even if at a distance, and we do not ask, nor would it be appropriate to interrogate, their reasons for enlisting.

“To all of them in their silence we offer our own silence, without judgement, and with respect for their ideals, as they knew them, and for the humanity they expressed towards each other. And we offer our sorrow too that they and their families were not given the compassion and the understanding over the decades that they should have received.”

He said it was important to go past the staggering statistics of the war and remember “the tragedy of each single death, of every life shattered.”

Dedicating the cross, Mr Higgins said: “As friends we, Irish and British, share this moment of remembrance; and in mutual sympathy we dedicate this monument to the memory of all those who lost their lives during the too long, dreadful years of 1914 to 1918. “Let us now, together, cultivate memory as a tool for the living and as a sure base for the future - memory employed in the task of building peace.” 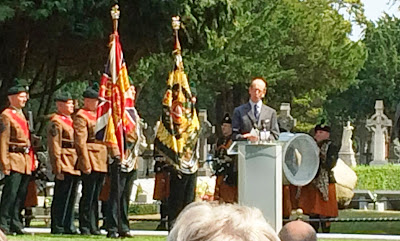 The Duke of Kent said the ceremony was an important step in the continuing process of remembering those who died. “It represents a lasting tribute to their sacrifice and it is my hope, in the years to come, that memorials such as these continue to inspire successive generations to remember,” he said.

The attendance also included the new Minster for Arts, Heritage and the Gaeltacht, Heather Humphreys; the Secretary of State for Northern Ireland , Theresa Villiers; the British Ambassador to Ireland, Dominick Chilcott; and the chief executive of the Glasnevin Trust, George McCullough.

There were colour parties from the Irish and British armies, prayers led by Irish and British military chaplains, and appropriate musical contributions from Irish British army bands, including the two national anthems, Lead Kindly Light, Abide with Me and the Derry Air. 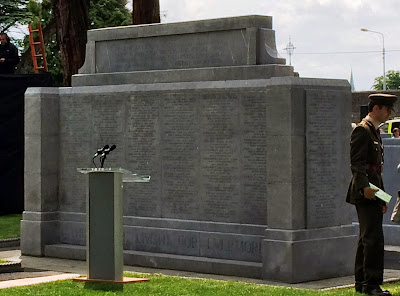 Two screen walls are carved with the names of Irish people who died in both world wars (Photograph: Patrick Comerford, 2014)

The Cross of Sacrifice is seven metres tall cross, and is made of blue limestone from Threecastles Quarry in Co Kilkenny by McKeon Stone of Stradbally, Co Laois. It follows the design set by Sir Reginald Blomfield (1856-1942), the British architect who created the template cross for the War Graves Commission after World War I. Hundreds of Blomfield design crosses have been erected around the world, but until today none had been erected in the Republic of Ireland.

The stone cross stands on an octagonal platform and has a bronze sword mounted on its face, blade pointing down. It has been erected at a ceremonial plaza, close to two screen walls carved with the names of Irish people who died in both world wars while in British or Allied forces. It stands close to the graves of national figures such as Charles Steward Parnell, Michael Collins and Eamon de Valera.

The chair of the Glasnevin Trust, John Green, who invited me to today’s ceremony, is a descendant of the Comerford family of Co Cork, and a descendant of the Home Rule leader, John Redmond. He is descended from Anna Comerford (1829-1883) and James Sullivan Green, who were married in the Pro-Cathedral, Dublin, in 1857. Their son, John Maxwell Sullivan (Max) Green (1864-1922), married John Redmond’s daughter, Johanna, in Kensington in 1913.

In his address, John Green quoted from John Redmond’s brother, Major Willie Redmond. He also pointed out that 210,000 Irish men and women served in the British Army during World War I, and one in five perished. Thousands more serving in allied forces, including the Canadian and Australian forces. Another 100,000 served in British and Allied forces during World War II, and about 10,000 of them were killed. The Cross of Sacrifice is intended as a monument to them all, he said.

Teresa Villiers, explaining the symbolism of the Cross of Sacrifice, said the Cross represents the faith of the majority of the dead, and the sword represents the military character of the commemoration. She said the event showed a commitment from Britain and Ireland to working together to mark the centenaries of World War I and other significant anniversaries.

Dr Edward Madigan, Lecturer in Public History at Royal Holloway in the University of London, first proposed the installation of the Glasnevin cross during the two years he was the Resident Historian at the Commonwealth and War Graves Commission. He then led talks with the Irish Government and the Glasnevin Trust.

In his speech today he said he believes a Cross of Sacrifice was never erected in this part of Ireland after World War I because “the installation of Crosses of Sacrifice was unwelcome in the political and cultural climate of the 1920s in what was then the Irish Free State.”

Music was provided today by bands from both the Irish and the British army (Photograph: Patrick Comerford, 2014)

Apart from the small band of noisy protesters who pushed themselves up to the cemetery railings, it was obvious today that past antipathy has all but disappeared.

They screamed and shouted during the minute’s silence, during the prayers and during the speeches, including those by both President Higgins and the Duke of Kent. Their cries included “Shame!” and “Brits Out!” – it is shameful that they could try to drown out silence, prayers, and the elected President of Ireland, and the slogan “Brits Out!” would be seen for its racism if any other derogatory stereotype was used instead.

The threatened rain never came, and sun broke through the clouds halfway through the ceremony, perhaps a sign of hope on a sombre anniversary.

The ceremony in Glasnevin is part of a wider programme of ceremonies to mark the centenary of World War I and the decade of commemorations, with events such as the 1913 lockout and the 1916 Easter Rising also being marked.