David’s … dating from 1896 and hidden away in a side alley in the heart of Cambridge (Photograph: Patrick Comerford, 2014)

I changed my Facebook banner photograph a few days ago, putting up a photograph of a well-known antiquarian bookshop in Cambridge, and was surprised by the response. Obviously, many people were charmed by this photograph of David’s bookshop in Saint Edward’s Passage.

Cambridge, as you might expect, is a wonderful place for rummaging through the shelves of bookshops, both new and second-hand. Apart from the unique Cambridge University Bookshop, which claims to be the oldest shop in Cambridge, and the ubiquitous Waterstones on Sidney Street, there are bookshops in surprising side streets and on little corners, and book stalls in the market square at Market Hill.

One of the problems with Ryanair in the past was the baggage restrictions also imposed a limit on the number of books I could buy and take back with me during a stay in Cambridge. But Ryanair has become much more friendly and flexible, and the biggest temptation last week was to push Ryanair’s flexibility to the limit with the number of books I wanted to buy.

For years, a favourite bookshop for many was Galloway and Porter at 30 Sidney Street, right beside Sidney Sussex College where I was staying. But sadly the shop closed its doors a few years ago.

Poignancy was piled on sadness when the shop closed – for this was one in the rare group of bookshops that had been in business continuously for more than a century.

It first opened its doors in 1902 and took its name from its founders, Sidney Galloway and Charles Porter. I’m sure there must have been many jokes among Sidney Sussex undergraduates about Sidney Porter – and it is worth remembering that the staff at the Porter’s Lodge in Sidney Sussex are among the kindest and most helpful.

Sidney Galloway later left the shop in Sidney Street to start his own bookshop. But Galloway and Porter continued down to the third generation until it was bought a few years ago by a new owner Paul Ogden. It had remained at its original location at 30 Sidney Street, and was spread through three floors, with low prices, a great stock that was renewed regularly and a staff who gave browsers and buyers alike caring attention.

It was known for academic titles but also for second-hand and bargain books. In the face of mounting losses, Paul Ogden admitted he was been unable to sort out its financial problems. It finally closed its doors after 103 years in business with the loss of 13 jobs. Close by, the Oxfam Bookshop is still at No 28 Sidney Street. 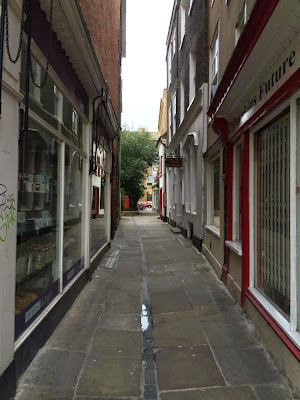 However, the little gem that I photographed early one morning last week is G. David, at 16 Saint Edward’s Passage and known to everyone simply as “David’s.”

Saint Edward’s Passage runs between the Guildhall and the Tourist Office and King’s College, and David’s is tucked into a corner in this tiny alleyway, facing the north-west corner of the Church of Saint Edward, King and Martyr. 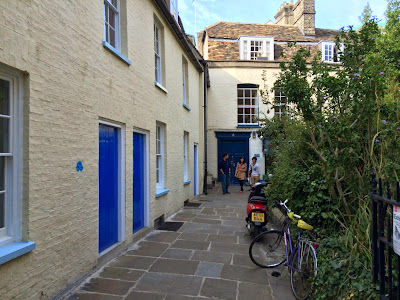 Saint Edward’s Passage curves around the Church, and both the passage and the shop – painted in bright blue and white that remind me of Greece and the Mediterranean on bright summer days – have the appearance of remaining unchanged and undisturbed for centuries.

I passed this shop every morning on my way from Sidney Sussex College to the early morning Eucharist in Saint Bene’t’s Church in Bene’t Street.

The original G David was a Parisian bookseller who started selling his books from a stall in the central market square in Cambridge, and he opened this shop in 1896. This shop remains unique to Cambridge, with no branches in any other town. David’s deals in antiquarian, second-hand and remaindered books, as well as maps, prints and engravings. The specialities include fine bindings, natural history, science, standard sets, travel and literature. 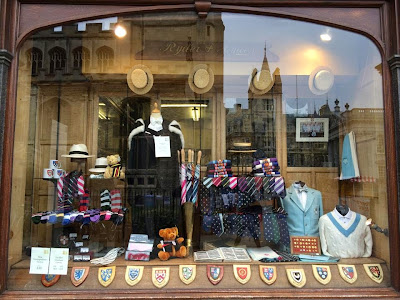 The Senate House and Great Saint Mary’s reflected in the window of Ryder and Ames on the corner of King’s Parade and Saint Mary’s Passage (Photograph: Patrick Comerford, 2014)

Close by is the shop of Ryder & Amies, on the corner of King’s Parade, university outfitters for over 150 years.

At first, this was a gentleman’s tailoring and robe outfitters, established around 1850. The business was founded by Joseph Ryder (1831-1900). In 1896, the year David’s moved into Saint Edward’s Passage, Edward William Amies (1862-1941) took on a partnership with Joseph Ryder.

Edward William Amies was a founder member of the Cambridge Chamber of Commerce and was Mayor of Cambridge in 1927-1928. Joseph Ryder’s grandsons did not have any children, and so the Ryder family’s link with the business came to an end. Today it is run by the fifth generation of the Amies family.

Before leaving, I ended up in the Cambridge University Press shop, at Number 1 Trinity Street opposite Senate House and across from Great Saint Mary’s, the University Church.

I ended up with a signed copy of a new book by Nicholas Chrimes, Cambridge, Treasure Island in the Fens, which was published in 2009 and is now in its second edition.

When I return there may be more time to browse in David’s … if I book an extra piece of baggage with Ryanair.